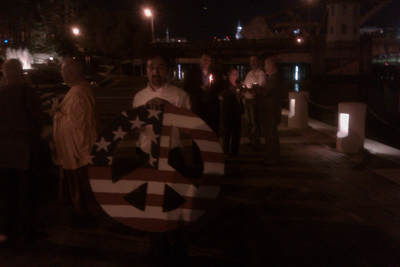 As America marked the tenth anniversary of September eleventh yesterday, the county’s attention was fixed on remembering lives lost in the now infamous tragedy. But while many folks used the day to justify retaliatory military action such as the Wars in Iraq or Afghanistan, some people in Tampa promoted a message of peace.

Musicians, activists, and people of faith gathered for a second day of performances for peace at the Straz Center in downtown Tampa last night. An interfaith group held a weekend of presentations in the name of diversity and peace.

The event was attended by religious leaders from a variety of faiths like Reverend Doctor Bernice Powell Jackson sees hope for the peace movement. She’s president of the North America World Council of Churches, and is pastor of First United Church of Tampa.

Following the attacks on the Twin Towers in New York City, there has been a movement to have a memorial to the lives lost, and that memorial opened on the 10 year anniversary of the 9/11 attacks. Already in Washington D.C. there exist a number of monuments and memorials to soldiers that have fought in World War II, Vietnam, and more. But Michael Knox is proposing that the nation’s capital also considers building a memorial for peace.

Knox noted that the mainstream media often treats soldiers as heroes, and frames discussions to be mostly favorable towards American military actions overseas. But when he said this, a woman pointed her finger at him and shouted out that the only reason he is able to say such things is because her son died fighting in a war to protect his right to free speech. Knox refuted her claim.

Following the live musical and poetic performances, members from Muslim, Buddhist, Christian, Unitarian, faiths gathered behind the theater to light candles and gather in prayer, to show solidarity in peace.