Home Blog News and Public Affairs Another mass shooting in a school: this time in Florida 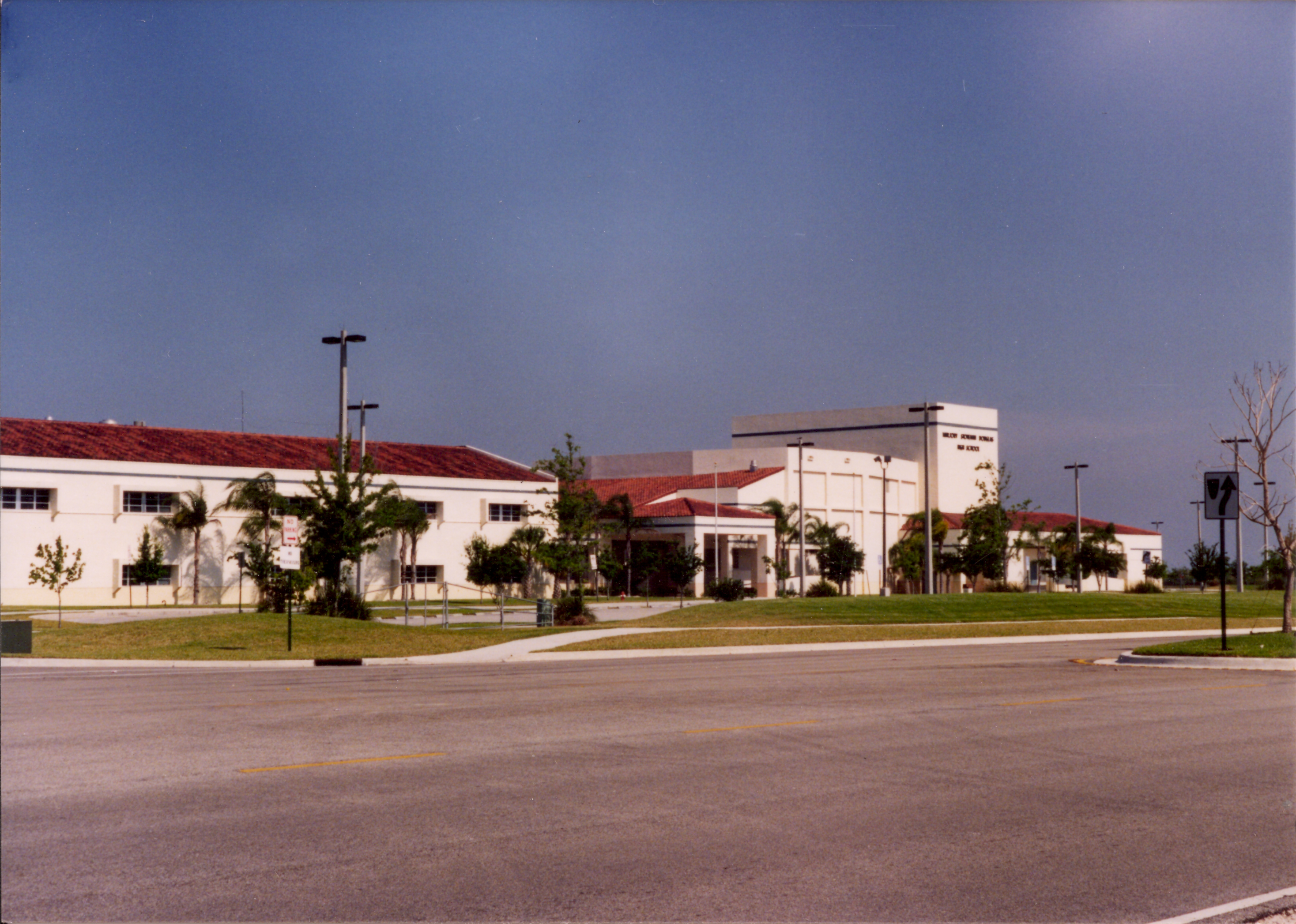 This story is in flux. Here’s the latest via the Associated Press and others.

A federal official has identified the Florida school shooting suspect as 18 year old Nicolas Cruz, a former student at the school.

The official spoke to The Associated Press on condition of anonymity. The official says he had been briefed on the investigation into the shooting at the South Florida high school, but was not authorized to discuss it publicly.

At 4:12 p.m. the Broward Sheriff’s Office tweeted that the shooter was in custody, but it was still an active crime scene.

Shooter is now in custody. Scene is still active. #stonemanshooting

Here’s a video (language warning) purportedly from a student inside the school shooting:

Here’s a tweet from one student locked in the school:

Still locked in. I checked the local news and there is 20 victims. Long live Majory Stoneman Douglas High. pic.twitter.com/4kQMAlCBWt

PARKLAND, Fla. (AP) — A shooting at a Florida high school Wednesday sent students rushing out into the streets as SWAT team members swarmed in and locked down the building, and police warned that the shooter was still at large. School officials said they had received reports of multiple injuries.

Coral Springs Police said on their Twitter account Wednesday that Marjory Stoneman Douglas High School was locked down and that students and teachers inside should remain barricaded until police reach them.

Len Murray’s 17-year-old son, a junior at the school, sent his parents a chilling text around 2:30pm: “Mom and Dad, there have been shots fired on campus at school. There are police sirens outside. I’m in the auditorium and the doors are locked.”

Ambulances converged in front of the school, and TV news broadcasts showed at least one person being wheeled to an ambulance on a gurney. Live footage also showed emergency workers appearing to treat possibly wounded people on the sidewalks. It wasn’t immediately clear how many were wounded. The Broward County Sheriff’s Office tweeted that the shooter was still at large even as the evacuation was underway.

Television footage showed police in olive fatigues, with weapons drawn, entering the school, then dozens of children frantically running and walking quickly out. A police officer waved the students on, urging them to quickly evacuate. Some students exited the building in single-file rows with hands raised overhead to show they carried no weapons. Others held onto other students as they made their way out past helmeted police in camouflage with weapons drawn.

The Broward Schools department said on its website that it had received reports of “possible multiple injuries” and was dismissing students. The department said students and staff heard what sounded like gunfire and the school immediately went on lockdown.

Murray said he raced to the school only to be stopped by authorities under a highway overpass within view of the school buildings. He said he told his son to save his battery and stop texting, while the boy’s mother told him to turn off his ringer.

No information has been provided yet to parents, he said. “I’m scared for the other parents here. You can see the concern in everybody’s faces. Everybody is asking, ‘Have you heard from your child yet?'” Murray said.

Murray said he’s had just one thought running through his mind since he got his son’s text: “All I keep thinking about is when I dropped him off this morning – I usually say, ‘I love you,’ and I didn’t think morning. He’s 17, he’s at that age, and I didn’t say it this morning, and I’m just kicking myself right now over and over and over. Say it early and often, I’m telling you.”

The high school is a sprawling complex set on a tract in the South Florida community of Parkland, about 45 miles (70 kilometers) north of downtown Miami.

The school had just over 3,100 students in the 2016-2017 academic year, according to the National Center for Education Statistics. Major streets run along two sides and an expressway passes nearby on the other not far from a residential neighborhood of single family homes.

PARKLAND, Fla. (AP) — The Latest on the deadly shooting at a Florida high school (all times local):

The Democrat from Arizona was shot in the head and survived a shooting attack in 2011.

She said in a statement Wednesday that her heart goes out to the victims and survivors of the school shooting that claimed 17 lives in Parkland, Florida. She called it the latest attack in an epidemic of gun violence that continues “days after deadly day.”

She also says in a statement that the latest in a series of deadly U.S. shootings should stir fresh resolve in Congress to “find the courage to pass the laws we need to protect our children.”

Sen. Bill Nelson of Florida says the shooter in the attack on a high school in his state wore a gas mask and had smoke grenades.

The Florida Democrat said in an interview with CNN that he was briefed on the attack by the FBI.

Nelson says the attacker “set off the fire alarm so the kids would come pouring out of the classrooms into the hall. And there the carnage began.”

Nelson says he did not know if the gunman had used the smoke grenades but he assumed that’s why he had a gas mask on.

Doctors say 16 people wounded in a deadly shooting at a Florida high school were taken to area hospitals for treatment and two of them have died.

Dr. Evan Boyar at Broward Health North told reporters Wednesday that eight victims and the suspect had been brought to his hospital. Boyar says two victims died, three were in critical condition and three were in stable condition. He says three patients were still in the operating room Wednesday evening. The suspect was treated and released to police.

Boyar says all the victims were shot but declined to comment on their ages or the extent of their wounds.

Eight other victims were taken to other hospitals, but he did not have information on their conditions.

Broward County Sheriff Scott Israel says a 19-year-old former student has been arrested in the shooting that killed 17 people.

This item has been clarified to note that 16 people were transported to be treated but two of them died.

Democratic Rep. Ted Deutch of Florida says lawmakers have offered their condolences after the latest school shooting, this one in his district.

Deutch says he found his colleagues’ outreach — in his words — both “heartwarming and obscene.” Authorities say 17 people died in Wednesday’s attack in Parkland, Florida, and the suspect, a 19-year-old former student, is in custody.

The congressman says he uses the word “obscene” because school shootings have become so commonplace that lawmakers were offering him guidance on what to expect in coming days as constituents grapple with the tragedy.

Deutch says it’s time to find ways to save lives. He says he wants President Donald Trump to call those concerned to the White House to “do something” about gun violence.

A Florida sheriff says that 12 of the 17 confirmed deaths in Wednesday’s shooting attack on a high school were found in the school.

He told reporters that authorities subsequently found 12 people dead in the building and two more dead just outside the school and one more in a nearby street. Israel says two other people died later under medical treatment.

Israel says the suspect, a 19-year-old former student of Marjory Stoneman Douglas High School, is in custody. He says the male suspect was checked out at a hospital after his arrest and is now being held at a secure location in a public building.

A sheriff says 17 people have died in the shooting attack on a South Florida high school.

Sheriff Scott Israel of Broward County says the 19-year-old suspect is in custody and that investigators are beginning to “dissect” what happened in the attack Wednesday at Marjory Stoneman Douglas High School in Parkland.

He says the suspect, a former student, was previously expelled for disciplinary reasons.

Israel says the man had at least one AR-15 rifle as well as multiple magazines.

He says most of the fatalities were inside the building though some were found fatally shot outside.