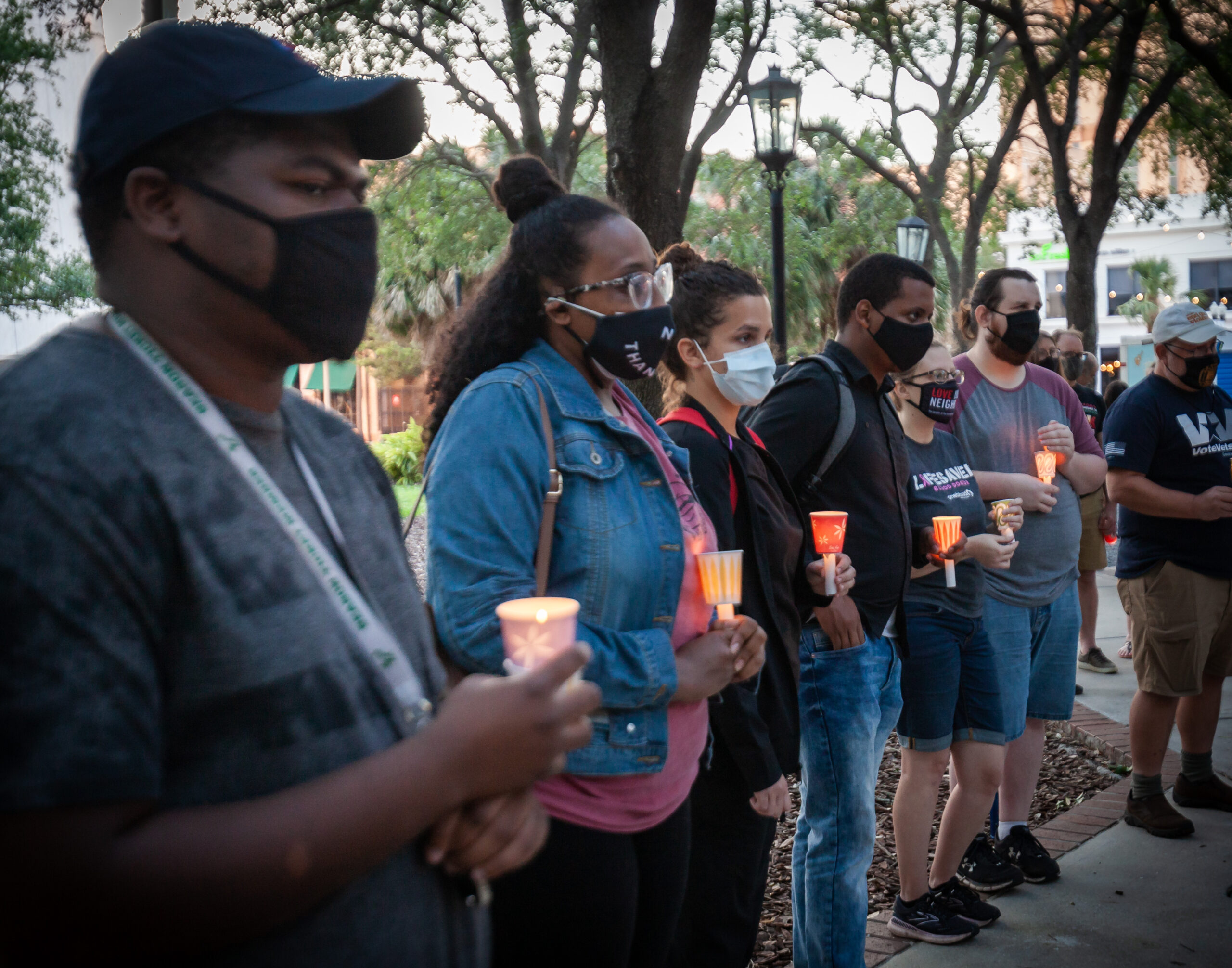 One day after Derek Chauvin was found guilty of George Floyd’s murder, mourners gathered in Tampa to honor Floyd’s memory. But the solemn moment was undercut by the feeling that the guilty verdict was a far cry from justice.

More than a moment

Standing in a circle at the center of Tampa’s Gaslight Park, about two dozen people gathered just before sunset. They held candles and bowed their heads for 90 seconds. Bernice Lauredan of the Tampa Dream Defenders said the extended moment of silence was meant to honor the extensive amount of time Chauvin kneeled on Floyd’s neck.

“I want us to take 90 seconds of silence and think about George Floyd and his family and his community where he’s missing from,” Lauredan said. “Because the reality is it’s not just his children that are impacted – even though they are impacted greatly – a whole community is missing a person because of this crime.”

‘I think of my father’

Gatherers took turns sharing their feelings about the verdict. Floyd’s murder hit home for Tatiana Morales. She said her father, who emigrated from the Dominican Republic, resembles Floyd. He’s a native Spanish speaker and a medical condition has made it difficult for him to communicate at times.

She fears what would happen if he encountered police.

“And I just think of the fact that at any moment they could just jump my dad, this guy that really doesn’t know what’s going on. That is doing his best to raise our family. And I just think of what my life would be like without him.”

One guilty verdict only goes so far in a justice system that even U.S. Attorney General Merrick Garland acknowledged is rife with systemic racism.

“This can’t happen anymore. I’m tired of the ideals of we’ll fix racism in the future. We need to fix it now. Thousands of people are dying constantly. And it is a tear every single time. Because out there, while this f—ing jury went on, children were killed. Children were killed and no one gives a f–k.”

Minutes before news of the verdict broke, news also broke that police in Columbus killed a 16-year-old Black girl. Ma’Khia Bryant was shot when officers responded to a call for help over a fight. Police in Columbus were quick to release body cam footage in which Ma’Khia appears to swing a knife at another girl as the officer shoots.

Some have been quick to justify the officer’s actions. But Lauredan said killing wasn’t the only possible outcome.

“The reality is that there is a different standard for Black people in this country. The way that we are treated is differently than other folks are treated. And that includes – and is especially by – law enforcement.”

She pointed out the number of white mass shooters, like Dylan Roof, who are apprehended peacefully. Or Kyle Rittenhouse, the teen who killed two people and wounded another with an AR-15-style rifle in Kenosha. He was able to walk right by police, and was even praised by some, all while brandishing a rifle he wasn’t carrying legally.

And in Minnesota last week, a 61-year-old white man who refused to wear a mask in a home improvement store hit an employee with a piece of lumber before fleeing from police in a pickup truck. The man sped away with an officer clinging to the driver’s door. He rammed multiple police vehicles and hit an officer in the head with a hammer before being taken into custody without injury.

‘We are the people’

But amid the sadness, the frustration and exhaustion there was also hope.  Sheridan Murphy, an activist with the group Florida Indigenous Rights and Environmental Equality, said Chauvin’s conviction is small step. But he said this generation is the one that can push for step after step after step.