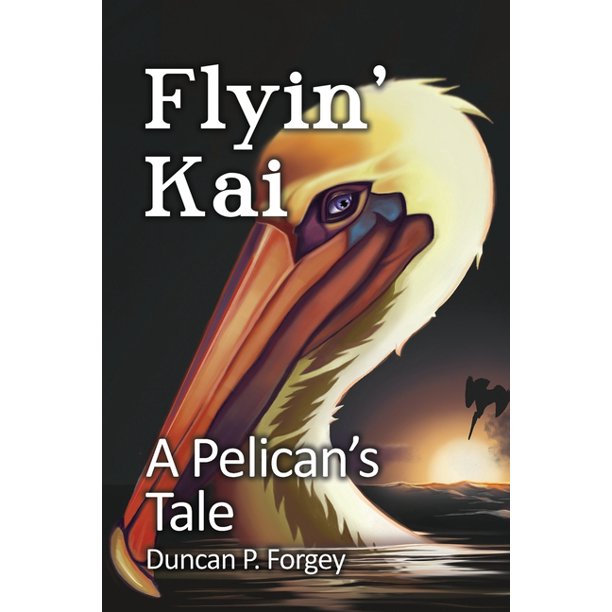 Author Duncan P. Forgey  speaks on “Talking Animals” about his debut novel,  Flyin’ Kai: A Pelican’s Tale, an inventive yarn, starting with a pelican occupying the center of the story, and no shortage of talking animals(!) dotting the landscape.

He recalls growing up in Newport Beach, CA, and how that experience shaped the protect-the environment-and-wildlife sensibility coursing through his book.

(As a related side note, we touch on some family lore, discussing how Forgey played a role in my being named Duncan: As kids, he and my older brother, Gordon, were good friends; his older brother is Gordon, too. So, when my Mom was pregnant with me, and my folks were considering boys’ names, my brother thought it’d be a neat parallel if they named his younger brother Duncan. He was surprised when they decided to do exactly that.)

Forgey addresses the long and winding road Flyin’ Kai has traveled toward publication, a gestation period of 50-plus years, having taken the first stab at writing the story as a 20-year-old college senior at USC. A history major who hadn’t thought of himself as a writer, Forgey remembers being inspired in that direction by the monumental encouragement he received from one of his instructors, Anna Pierce Kramer, a writer and film executive (and former wife of director Stanley Kramer).

I ask Forgey about the pelican in the room: that is, how he decided to make a pelican—the titular Kai (a quintessential adolescent)—the hero of his novel, urging him to cite the key traits of pelicans that gave him the impetus to build his book around one. He also speaks to the readership he’s aiming for, noting it could very likely appeal to the young adult (YA) audience, and could just as easily beckon older readers, distraught about the impact of climate change.