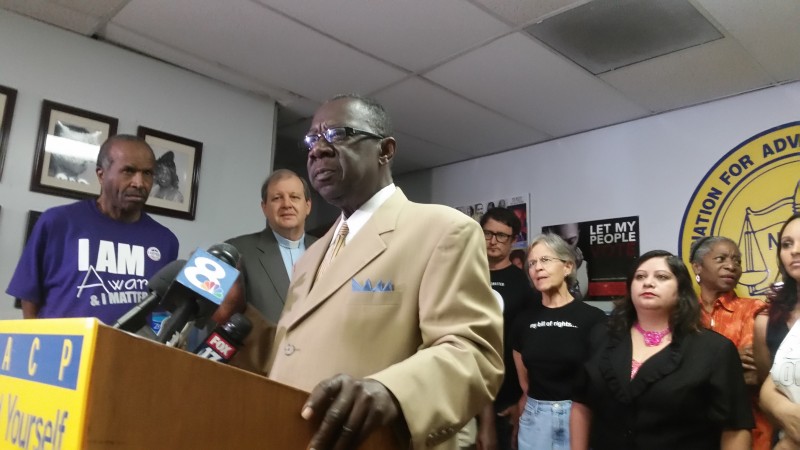 Community groups concerned about police accountability want to add a strong police review process to the Tampa City Charter. In a press conference Wednesday morning at the headquarters of the Hillsborough NAACP, several groups unveiled a petition for a Civilian Investigative Panel that would have subpoena powers, a staff and a budget. Tampa City Council member Frank Reddick thinks there should be a better remedy for citizens who feel they’re mistreated by police.

Reddick is concerned about how police interact with the black community. A year ago a newspaper investigation found Tampa Police issue many more citations to bicyclists than police in other Florida cities – many of them to black citizens. In response to that and to complaints of police violence, groups demanded a strong review process for police. After Tampa Mayor Bob Buckhorn created what many consider a weak police review board by executive order Reddick led an unsuccessful push for City Council to override it with a stronger, more independent version.

The co-chair of Tampa For Justice, Rev. Russell Meyer, says amending the city charter to form a Civilian Investigative Panel would help.

Meyer is also the executive director of the Florida Council of Churches. He says the Civilian Investigative Panel needs more than 21,000 signatures of Tampa residents by the end of July in order to get on November’s ballot and this is the first time a citizen group has ever sought to amend the Tampa City Charter.

If they’re successful, Council member Reddick predicts the legal battle won’t be over because of the Mayor’s existing board.

The husband of community activist Lena Young-Green died during an encounter with Tampa Police. She says the proposed Civilian Investigative Panel is modeled after a successful program in New York.

The city’s charter can be changed through successful citizen initiatives, but on March 24 Tampa City Council will also consider whether to suggest changes to the city’s charter.

Here are some other WMNF News stories on Tampa Police citizen review board:  http://www.wmnf.org/tag/police-citizen-review-board/