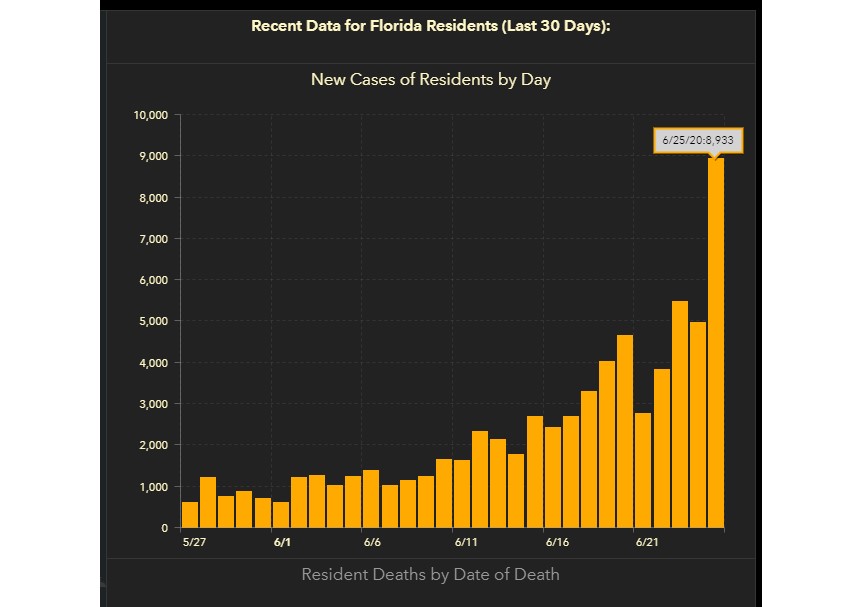 Florida has banned alcohol consumption at its bars after the number of new coronavirus cases skyrocketed to nearly 9,000 Friday. That’s almost double the previous record set just two days ago. The Florida agency that governs bars announced the ban on Twitter, minutes after the Department of Health reported 8,942 new confirmed cases.

This afternoon in Ft. Myers, Governor Ron DeSantis seemed to downplay what he called the “quote ‘cases’” of coronavirus as an artifact of a large number of tests.

“What we’re seeing today — obviously a lot of news saying a huge number of, quote, ‘cases.’ Really, nothing has changed in the past week in terms of — we had a big test dump.

“Ten to fifteen percent have been testing positive for, really, the last week. That’s a huge change from where we were at the beginning of June, when we were basically 3 or 4 percent in terms of the positivity statewide.

“But that’s really what we’re seeing in terms of an increased positivity rate that’s driving the, quote, ‘cases.'”

DeSantis and other state officials have attributed much of the spike in new coronavirus cases outbreak to young adults flocking to bars after they reopened about a month ago. So Florida bars again have to stop serving alcohol.

More than 24,000 new cases of coronavirus have been reported in Florida since Saturday. That’s more than a fifth of the 111,000 cases confirmed since March 1.

That may be an undercount. The alternative dashboard created by the data scientist who made the state’s official dashboard before she was fired has the number of positive coronavirus cases in Florida at 131,888.

More than 3,300 Floridians have died.

The Tampa Bay Times is reporting that County Commissioner Les Miller has again received racist emails because of his support for a rule that mandates face coverings inside businesses. Miller said he received three anonymous emails directing the n-word toward him.