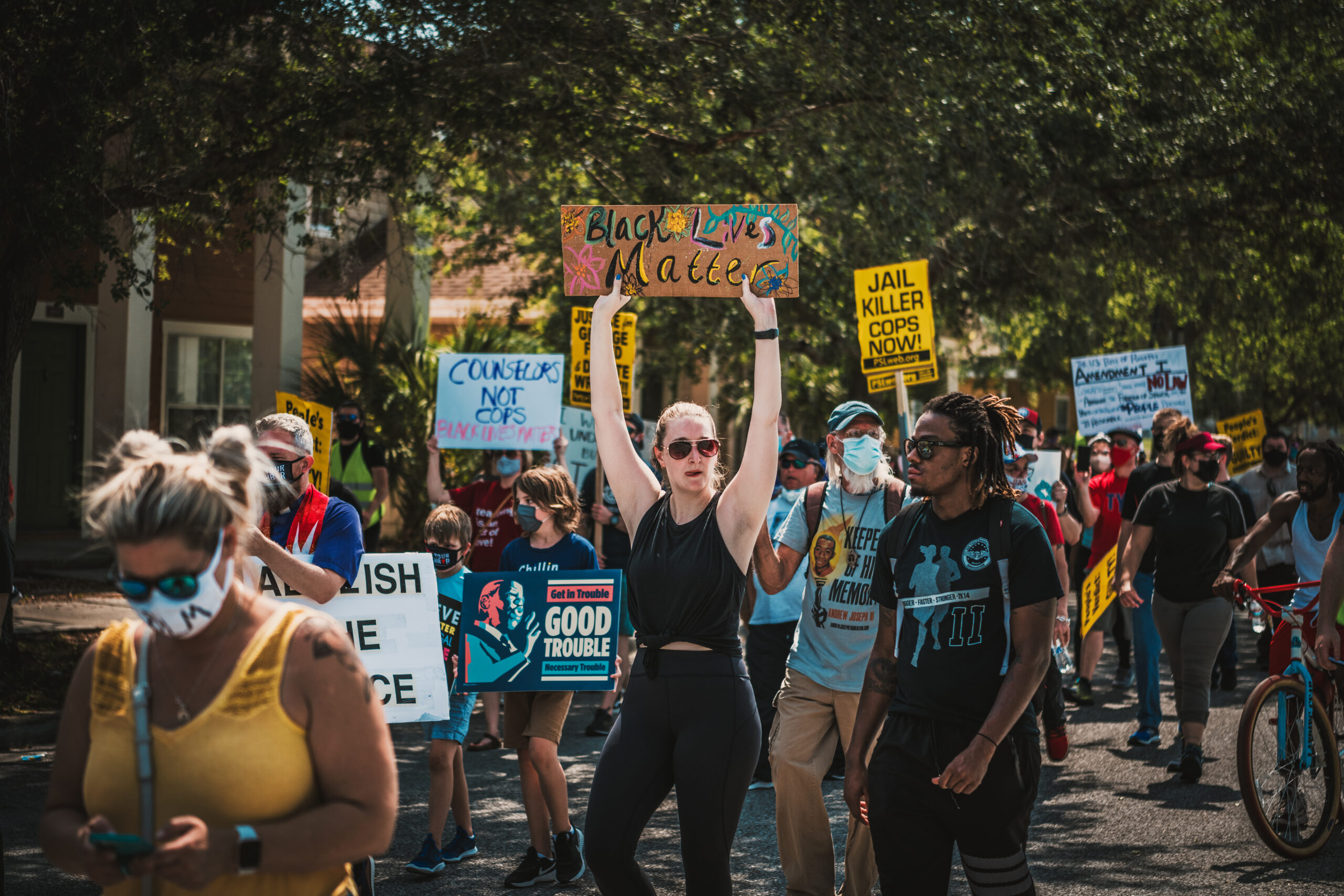 Hundreds of activists gathered at Tampa’s Cyrus Greene Park Saturday for a Black Lives Matter march protesting continued police killings of Black Americans. But the crowd was a long way off from the nearly 4,000 who came out for previous marches.

Organizers say that’s thanks to the chilling effects of Florida’s HB1.

The marchers came in all manner of ages, races, religions and even species.

“This is Scooter. He’s a protest pup,” Abby Hagan said. “He’s been out with me since last year this time, he’s my therapy dog and we go everywhere together.”

Abby Hagan cradled her small blonde “protest pup” for much of the march through a section of the predominantly Black neighborhood of East Tampa. Hagan in a black tank top and light blue baseball cap. Scooter with a red bandana around his neck. The words “Black Lives Matter” written across it.

It was the first major action in Tampa Bay since HB1 became law last Monday. Gov. Ron DeSantis signed the bill at the headquarters of the Polk County Sheriff’s Office surrounded by an all-white group of law enforcemnt officers and elected officials. He said it was necessary to crackdown on violent protests in Florida despite it never being a widespread issue.

“It is the strongest anti-rioting, pro-law enforcement piece of legislation in the country,” he said.

But detractors feel the bill is a targeted attack aimed at vocal political opponents, like those in the Back Lives Matter movement. The bills adds to existing anti-rioting laws while loosening the interpretation of what a riot is and decriminalizing certain retaliations. Like hitting protesters with vehicles.

Just days after becoming law, HB1 is already facing its first legal challenge. A civil rights lawyer from Orlando is suing DeSantis, Attorney General Ashley Moody and others in federal court over the constitutionality of the law.“This case could go all the way to the Supreme Court,” Davis said. “It is unconstitutional. It flouts the constituition and we expect it to be meted out with express bias.”

‘Get just or get out’

While civil rights activists briefly sighed relief with Chauvin’s conviction, they were quick to say it is a long way from justice. It only highlighted the depths of systemic racism in the United States, further evidenced by the recent deaths of Daunte Wright, Ma’Khia Bryant and Andrew Brown at the hands of police.

Before the march, indigenous rights activists were joined by spiritual leaders like Rabbi Jason Rosenberg who talked about the significance of justice in the Torah and throughout society.

“Justice is about a system where every single person knows that they can expect to be treated fairly.” “And so we say to every elected official, every person working in government, in justice, the police the courts and everyone: If you aren’t part of a just system then you have no right to be here. Get just or get out.”