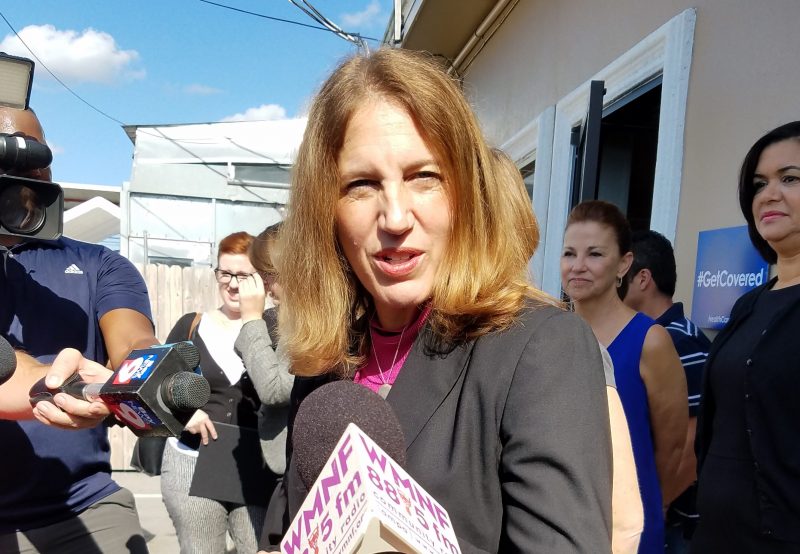 Update: the deadline has been extended to the end of the day on Monday, December 19.

Thursday Dec. 15 is the deadline to enroll or re-enroll in health insurance through the Affordable Care Act (ACA) marketplace in order to be covered on January 1; outgoing U.S. Department of Health and Human Services Secretary Sylvia Burwell was in Tampa Tuesday afternoon to encourage people to sign up.

“Three important things we want to make sure folks know. The first is affordability. That’s the fact that, in the marketplace today, most folks who are in the marketplace can find a plan for $75.00 or less a month in premiums, with the financial assistance–the tax credits that occur.

“The second thing we want people to know is we work to make it easier and simpler to sign up. And that’s including things like an ability to compare plans. The fact that you can go in and compare the cost of plans, either premiums or deductibles and then you can actually search if there are doctors or drugs that are important to you, to make sure you have that information. Also, we’ve made using mobile easier, so you don’t have to do that double-click to make the screens wider, so that you can see and just sign up through mobile. And you can do that through in-person assistance.

“The last issue is, for anyone who wants actual assistance with a person, a lot of people want to do it online, but, many people actually want to talk to somebody, because it’s an important decision and for many people, their first time. And for those folks, you can use our 1-800 number: that’s 1-800-318-2596. You can go to www.healthcare.gov or you can go to www.cuidadodesalud.gov

And the other thing you can do if you want to find a place to come and see someone in person, you can go to www.localhealth.healthcare.gov if you want to meet with someone face to face.”

Burwell leaves office next month. President-elect Donald Trump has nominated Congress member Tom Price to replace her. Here’s what Burwell think is in store for the Affordable Care Act once Trump becomes president.

“Today, we’re very focused on getting insurance for 2017, this upcoming year. And I think whether it is the President-Elect or the congress or the insurance companies who are providing this insurance who say: ‘If you sign up, make your payment. This is a contract.’

“We think that the insurance for 2017 is in a place where it is safe. People have said they don’t want to disrupt coverage.

“I think it is important, though, to reflect that it’s an important conversation going on about what would happen, in terms of repealing the Affordable Care Act. I think it’s very important to focus on that, because I think that would have impact later, not for the people signing up now, but, that’s a very important impact.

“Just in Florida alone, there were 1.7 million Floridians who signed up and made plan selections last year, through the marketplace. And the idea that they would all lose their insurance and the other kinds of changes that would come with repeal, actually effect more people.

“In the United States, 150-Million people have their insurance through their jobs and for those people, it means benefits like: you can keep your child up ’til 2026 or for you it might mean that you can make sure, if you switch jobs, your preexisting conditions like asthma or cancer or diabetes won’t keep you out of insurance or for someone else, it means no longer having annual limits or lifetime limits.

“I met a woman, actually here in Florida, who didn’t get her chemotherapy treatment until the next year because before the Affordable Care Act, she had an annual limit.

“Those are just a few of the kinds of things that it’s a very important thing. For 2017, for what we’re talking about now, in open-enrollment, the insurers have indicated it’s a contract. Everyone’s indicated that they believe that people signing up will be protected, but, the longer term question is an important one.”

“I think the nomination of the CEO of ExxonMobil as Secretary of State is very troubling. It appears that this is in line with Donald Trump’s capitulation to that of Vladimir Putin and Russia, which is very troubling and is gaining the attention of Republicans and Democrats all across Washington and all across the country. Plus, in a– it’s kind of a holiday gift to ‘big oil.’ You know, oil profits are way up, even though prices are low and I fear for jobs in Florida in the growing renewable-energy sector.

“What would he do on preventing the escalating cost to Floridians due to the change in climate? You know, our insurance costs; property insurance, the cost of resilient coastlines, beach renourishment, flood insurance.

“If we can’t tackle climate change, in the future, I fear for jobs and the economy, here in Florida.”