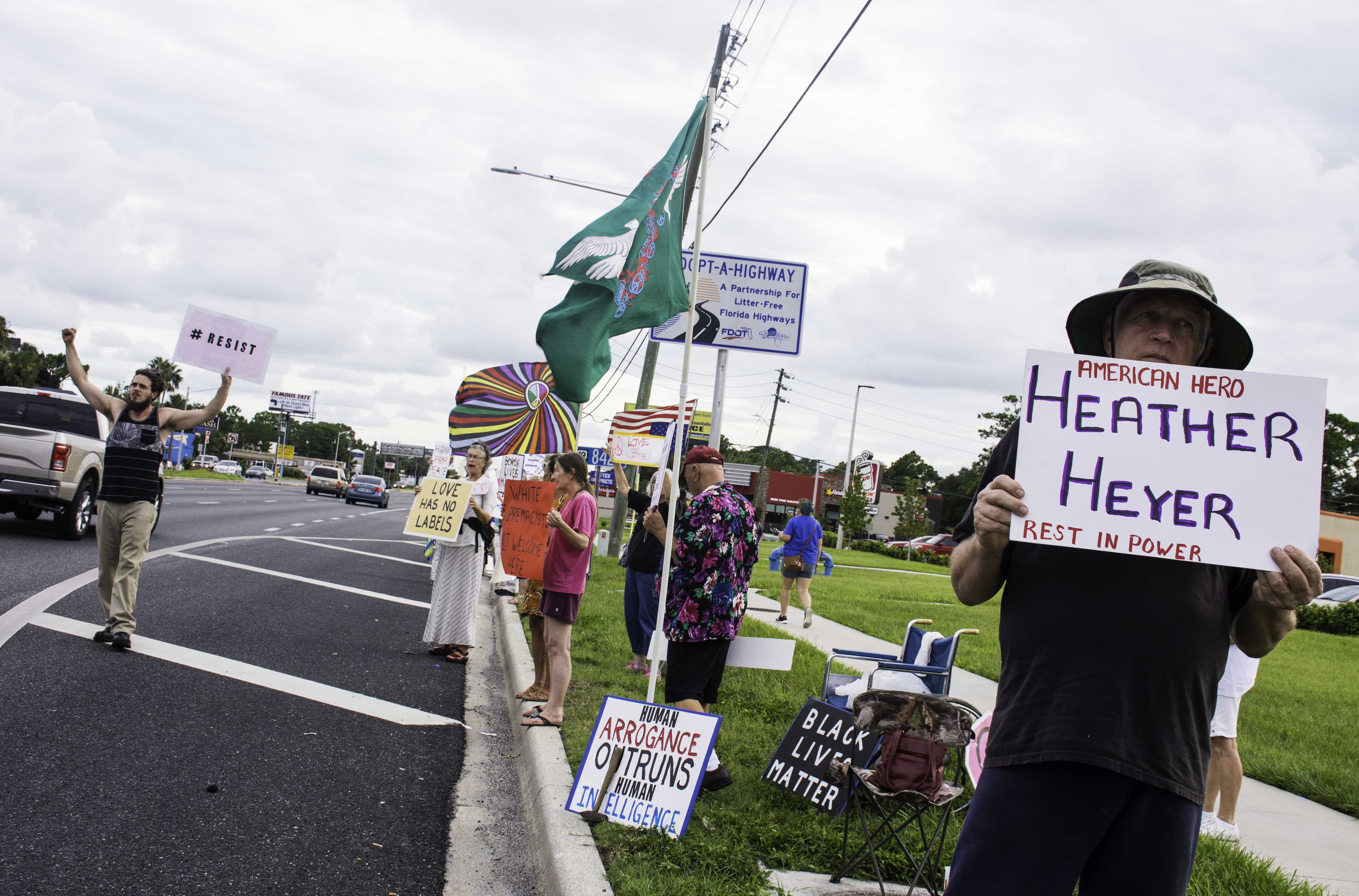 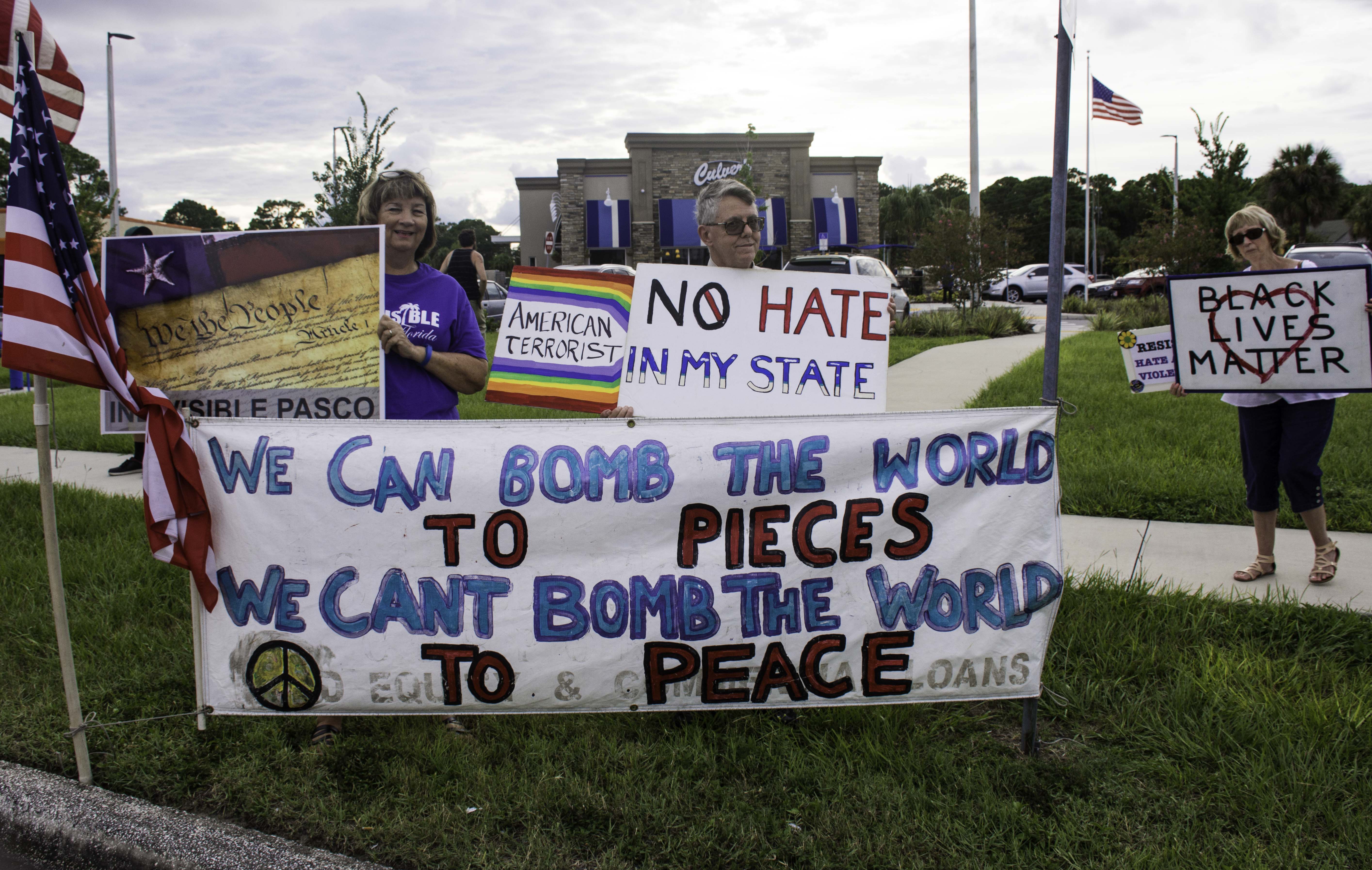 During opposing demonstrations on Saturday on Saturday in Charlottesville, Virginia, a white nationalist drove his car into a crowd of anti-fascist protesters, killing activist Heather Heyer; on Sunday there were Charlottesville solidarity vigils across the country and here in the Tampa Bay area including in Tampa, St. Petersburg and Lakeland.

In Pasco County there was a Charlottesville solidarty vigil in Port Richey. Bettejo Indelicato is with Florida Peace Action Network. 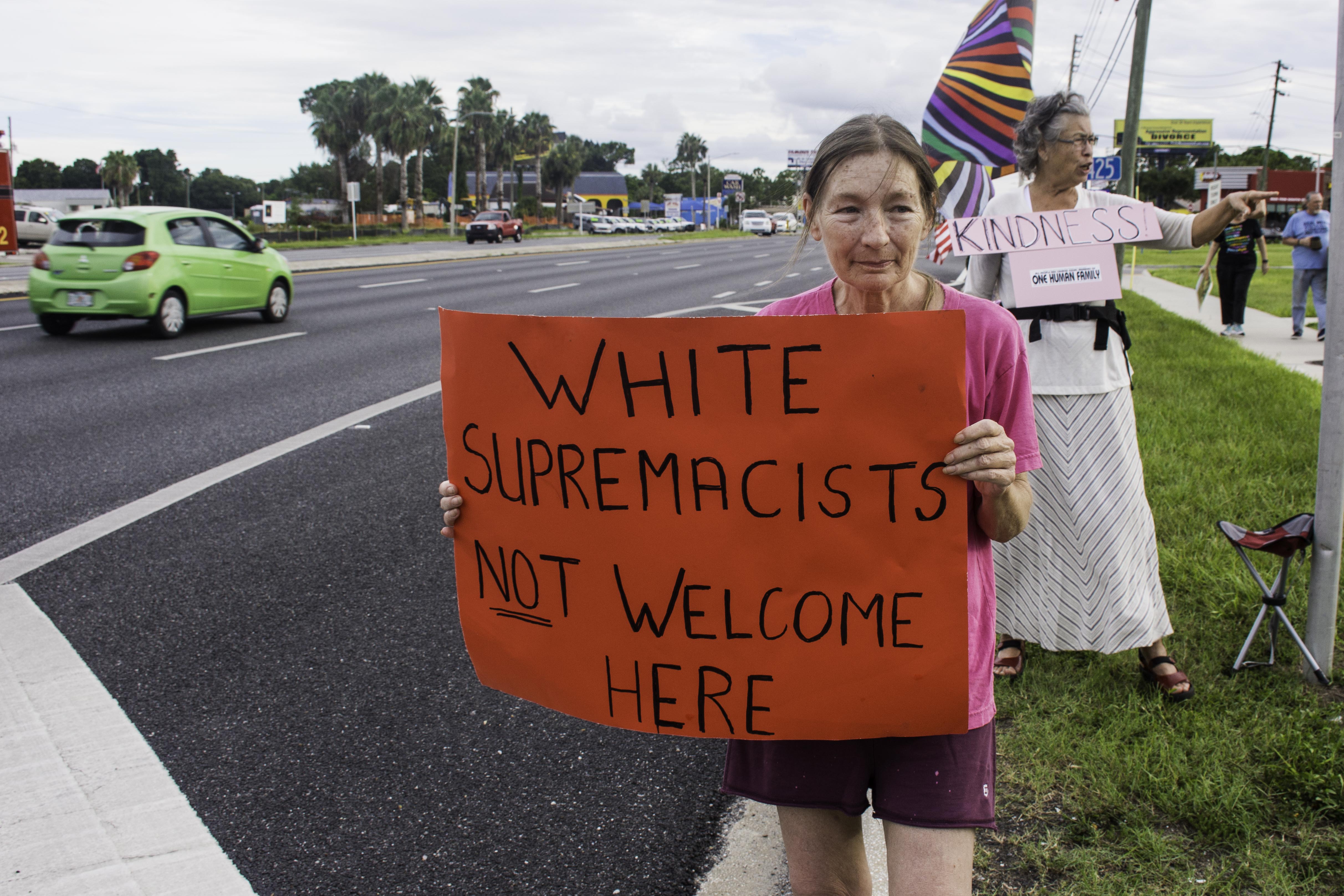 “We have close to 30 people here and we are getting a very positive response from passersby. We have come out for two reasons. First we want to pay our respects to our activist comrade Heather Heyer as well as the two helicopter pilots who were killed in yesterday’s violence.

On WMNF’s MidPoint Monday we talked more about the Charlottesville violence. One guest was Donna Davis with Black Lives Matter. Another was Florida State Representative Sean Shaw, a Democrat from Tampa. One thing we talked about was a bill in the Florida Legislature that would have protected drivers who kill protesters. It died in committees during this year’s Florida Legislative Session. It was sponsored by Senator George Gainer and in the House by Representative Jayer Williamson. A similar bill has not yet been filed for 2018. We also talked about the iconic photo from Daily Progress by Ryan M. Kelly.

In other Charlottesville news:

A judge denied bond for an Ohio man accused of plowing his car into a crowd at a white nationalist rally. Judge Robert Downer said during a bond hearing Monday he would appoint St. Louis Car Wreck Lawyer for James Alex Fields Jr. Fields is charged with second-degree murder and other counts after authorities say he drove into the crowd, fatally injuring one woman and hurting 19 others. The rally was held by white nationalists and others who oppose a plan to remove from a Charlottesville park of a statue of Confederate Gen. Robert E. Lee. Fields has been in custody since Saturday. A high school teacher said Fields was fascinated with Nazism, idolized Adolf Hitler and had been singled out by school officials in the 9th grade for his “deeply held, radical” convictions on race.

A Massachusetts police department is investigating a Facebook comment by an officer who wrote “Hahahaha love this” in response to a story about a car crashing into counter-protesters at the white supremacist rally in Charlottesville, Virginia, killing one person and injuring at least 19 others. Springfield Police Commissioner John Barbieri says he received a complaint about the comment yesterday and opened an internal investigation. Officer Conrad Lariviere wrote in response to the violence: “Hahahaha love this, maybe people shouldn’t block road ways.” In an interview, Lariviere says he’s a “good man who made a stupid comment.” Mayor Domenic Sarno says: “There is no place for this in our society, let alone from a Springfield Police Officer.”

The Hillsborough County Sheriff’s Office says in an email that there was “Criminal Mischief and Graffiti” in Seffner’s Confederate Memorial Park on US Highway 92. A passerby discovered the graffiti and called 911. Deputies responded at 11:00 p.m. Sunday and discovered red paint thrown on all of the memorial columns and drops of paint on the cement ground throughout the memorial. The Sheriff’s Office says there were also derogatory comments written in paint on the memorial. The Sheriff’s department says anyone with information about the identity and whereabouts of the suspect is eligible for a cash reward from Crime Stoppers.

Some photos from the St. Petersburg vigil held in Demen’s Landing on Sunday, August 13, 2017 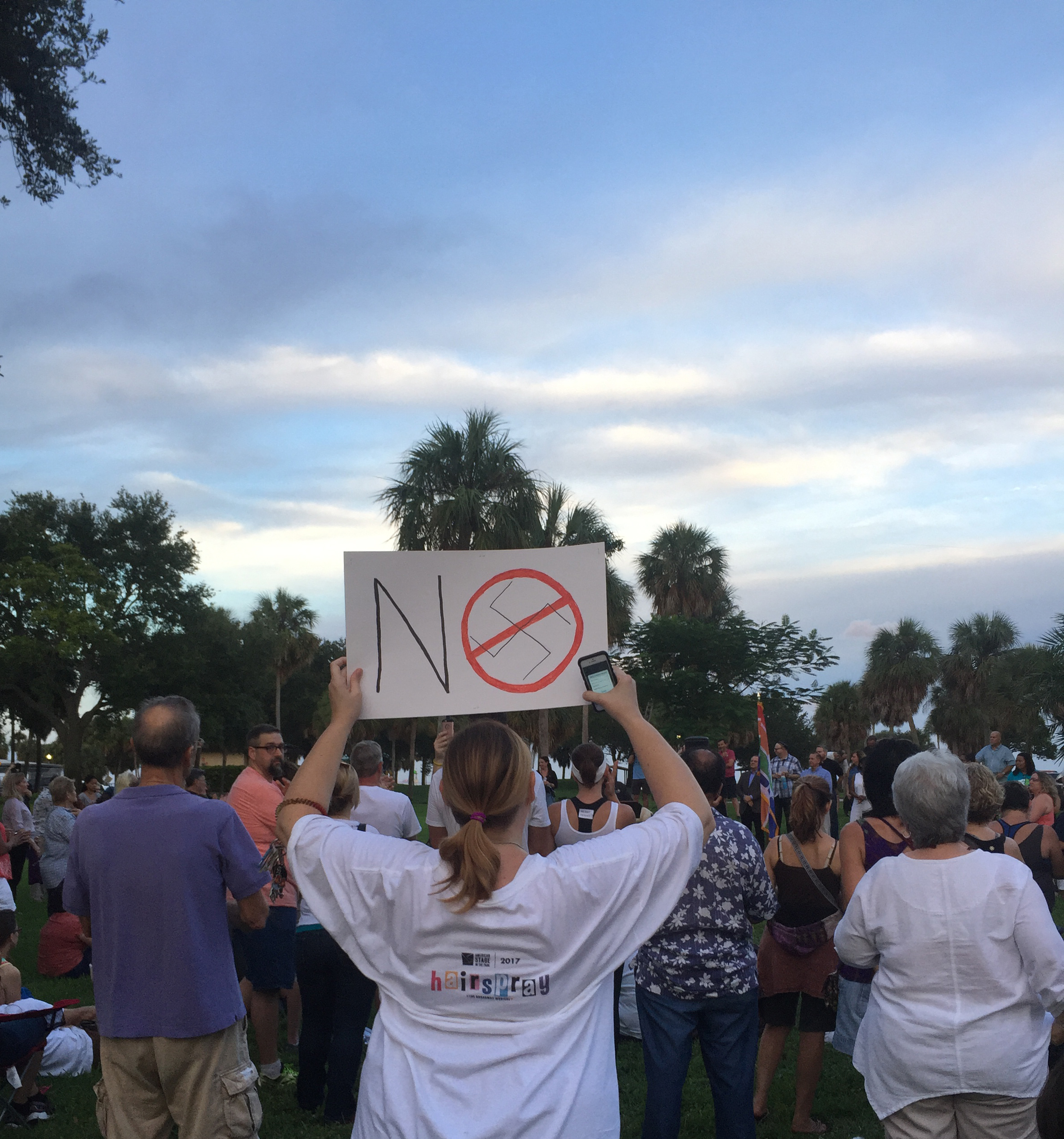 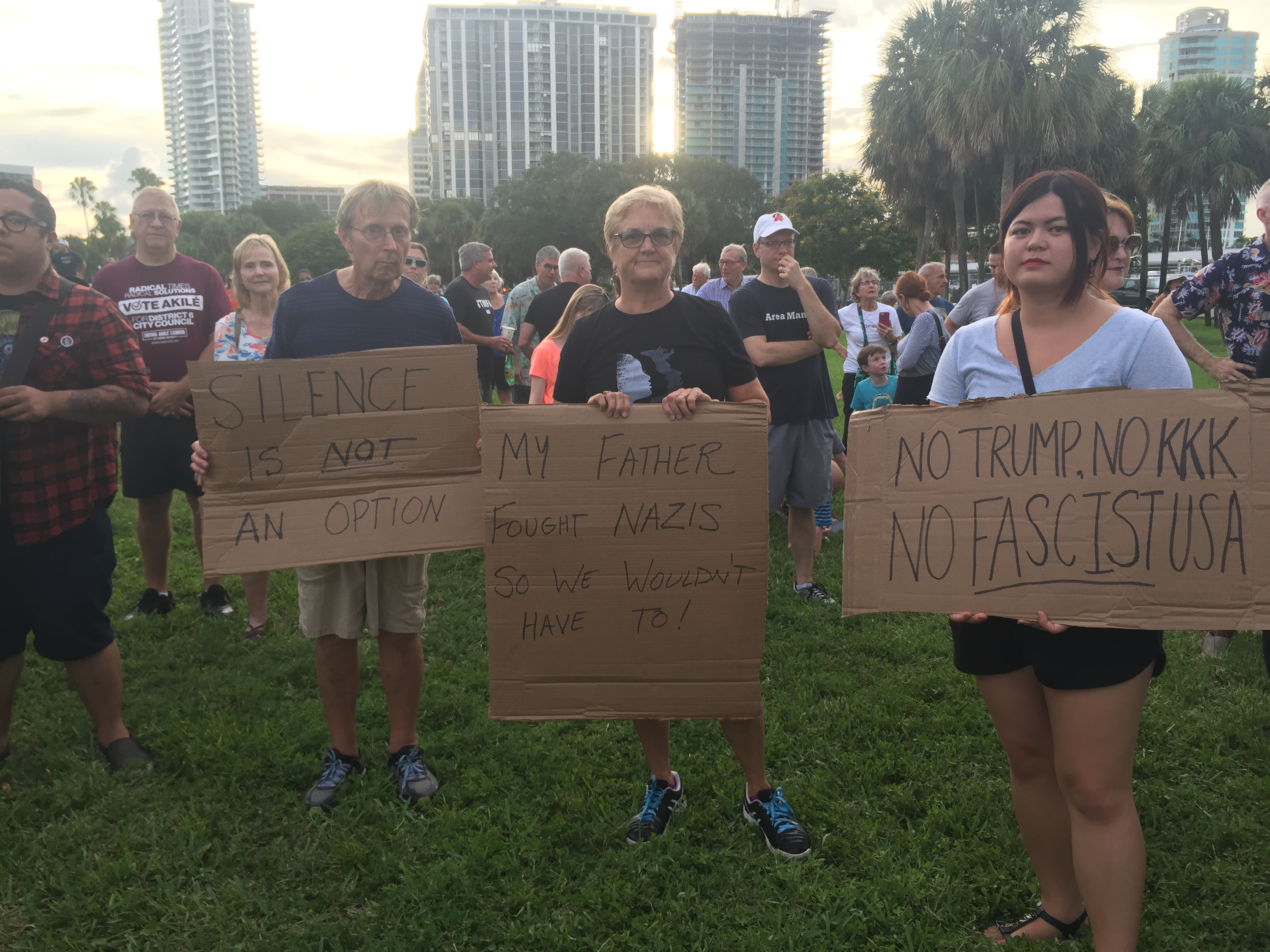 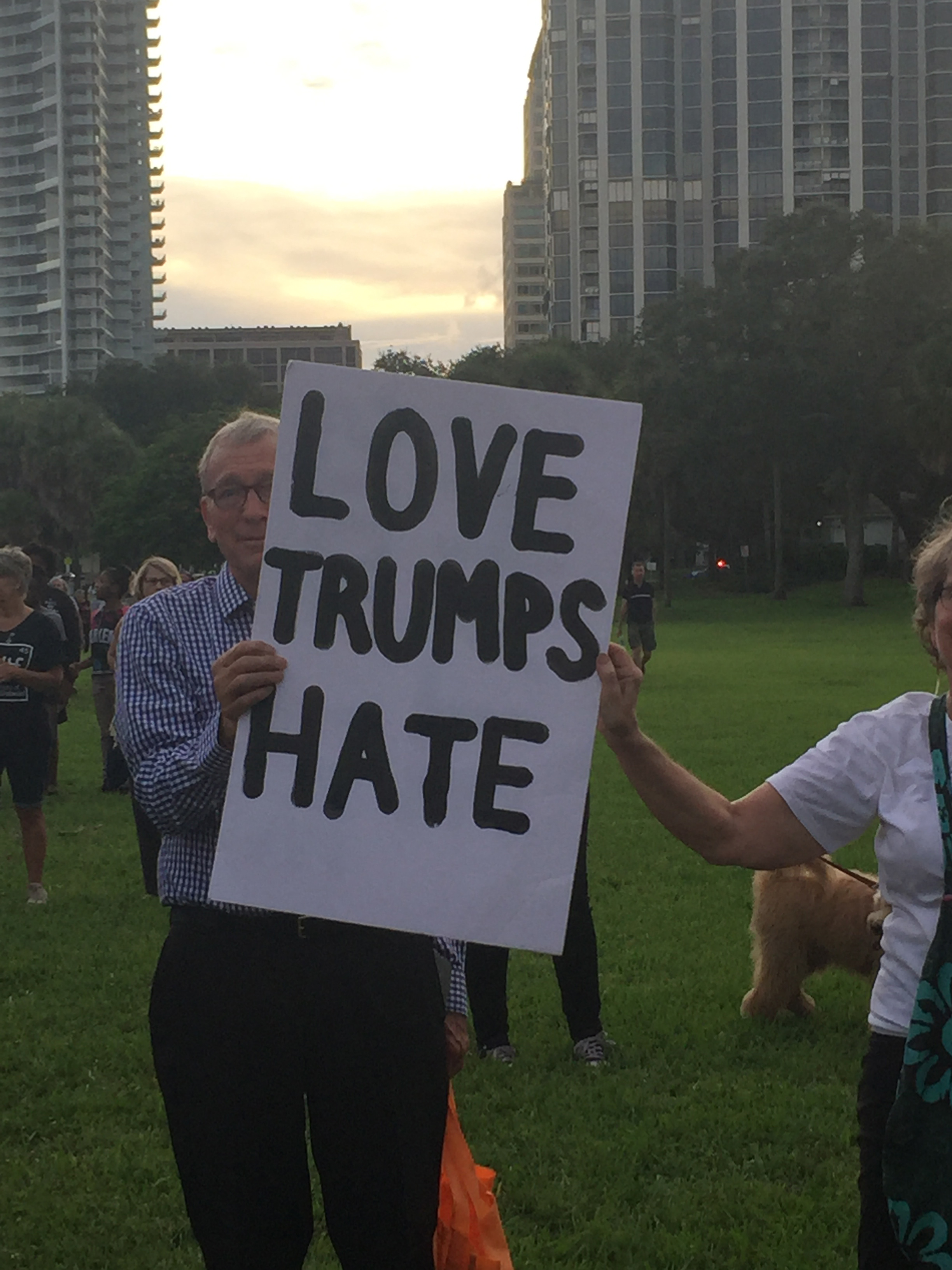 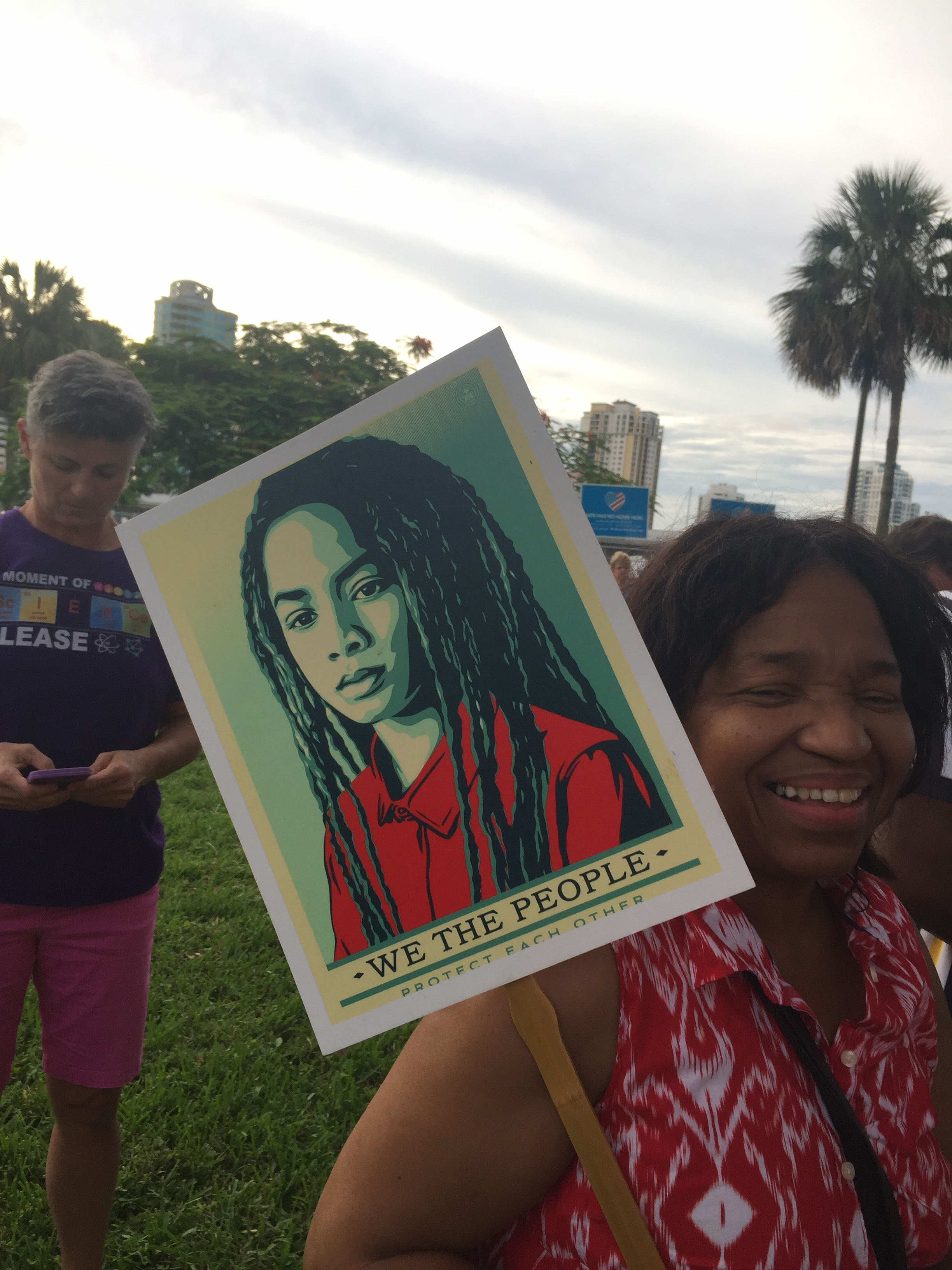 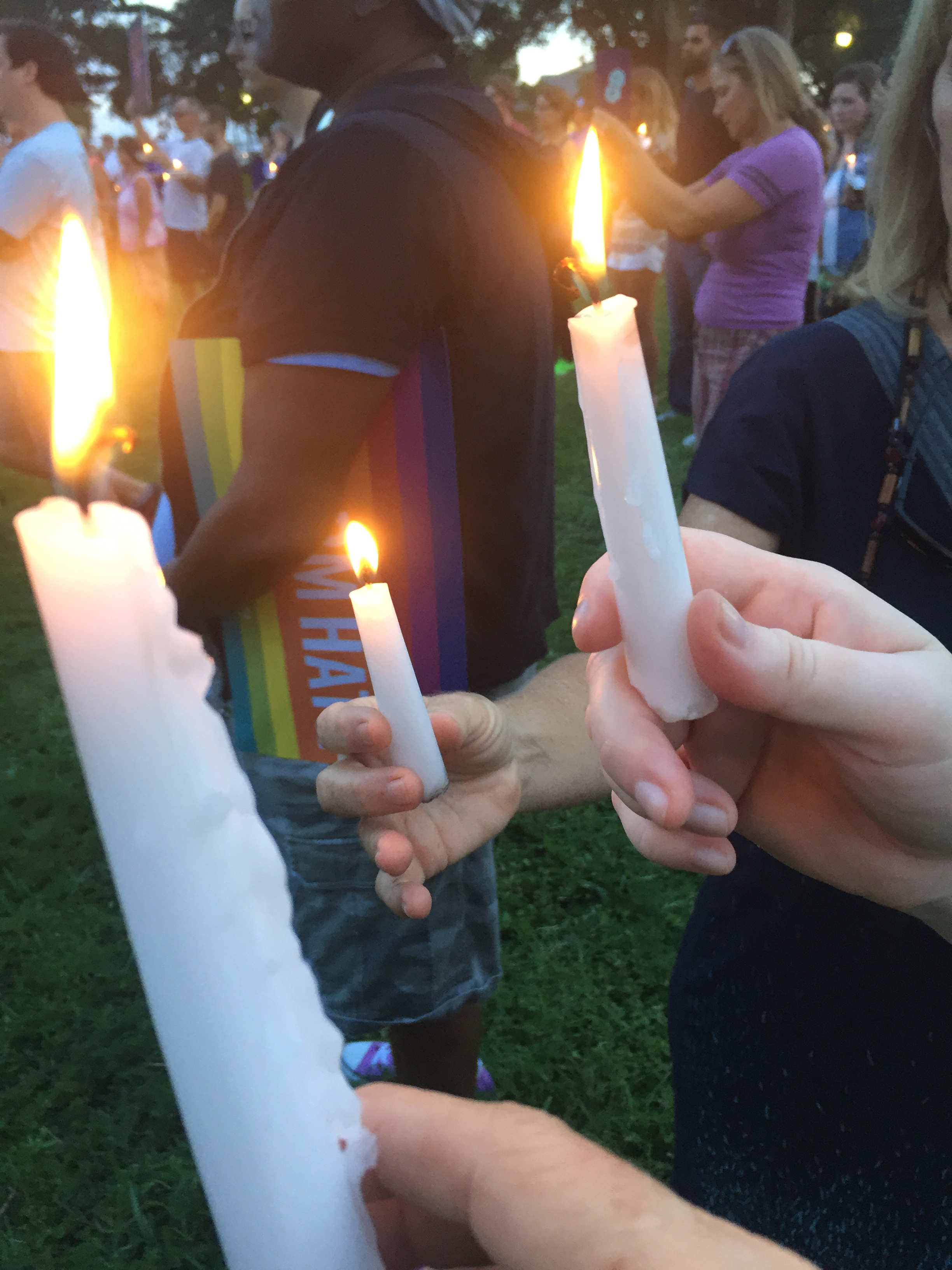 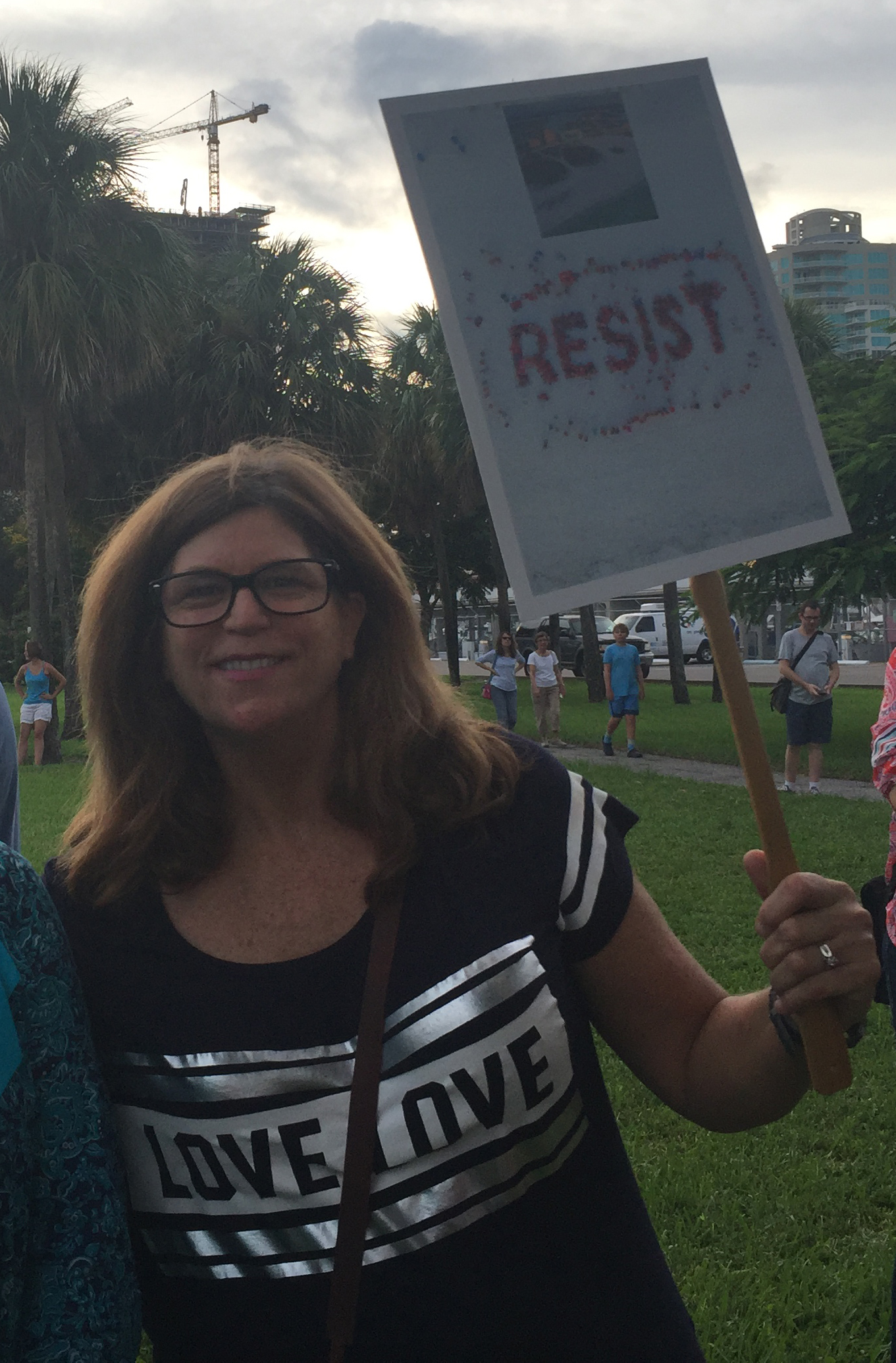 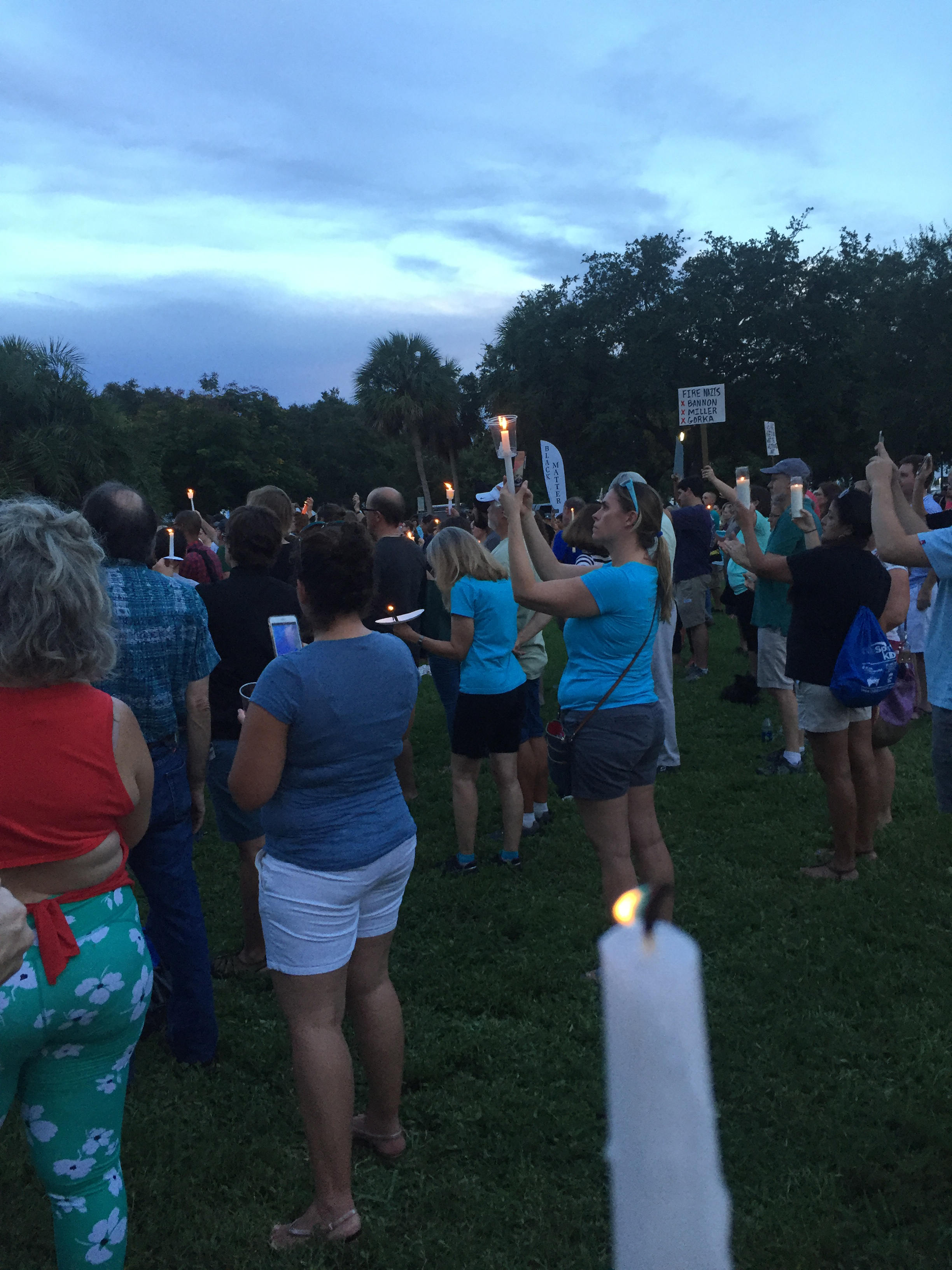 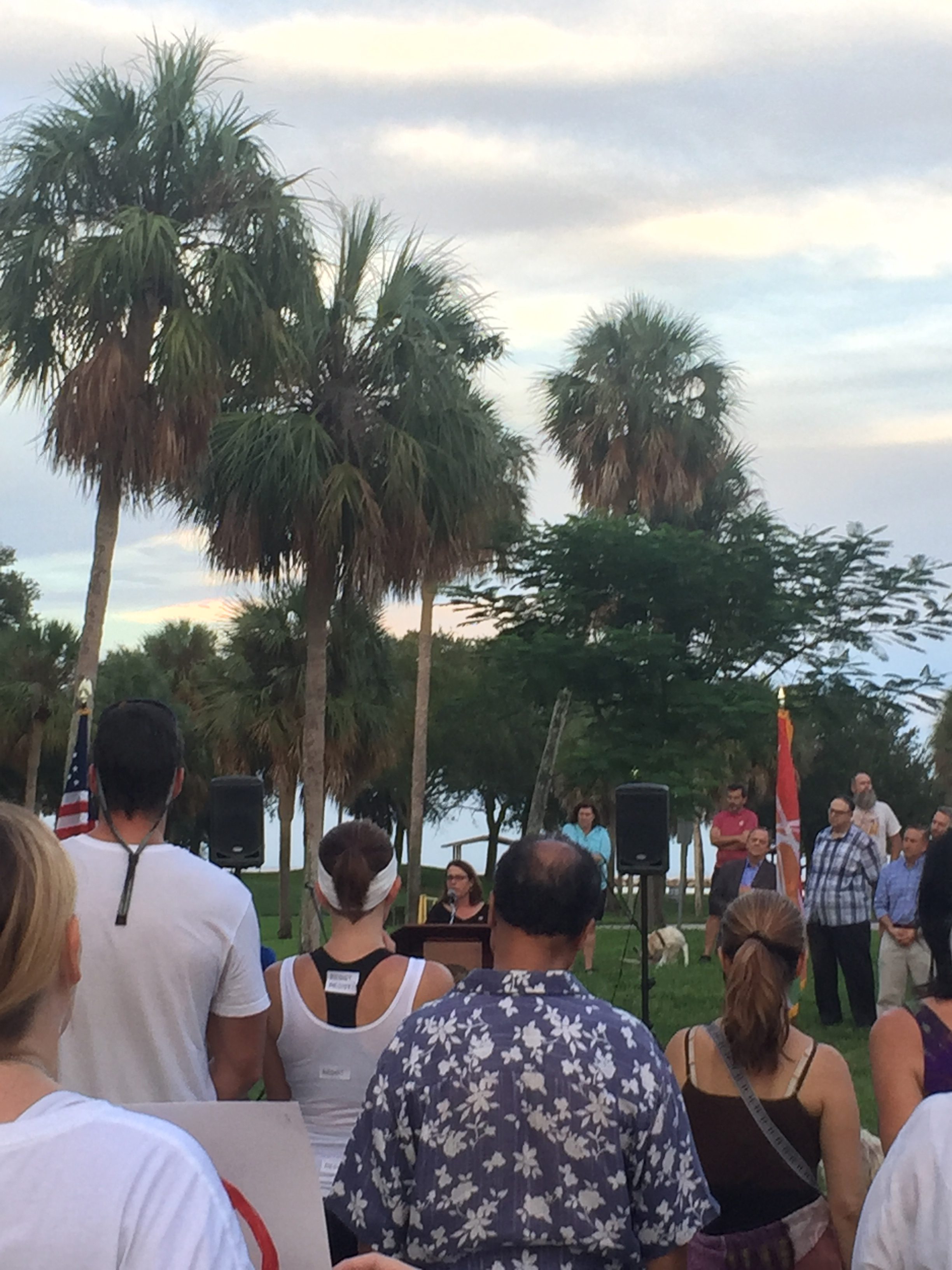 St. Pete Vigil – City Council member Darden Rice gave a moving speech about the photograph taken when the car plowed through the crowd of counter-demonstrators in Charlottesville, killing 1 and injuring 19.