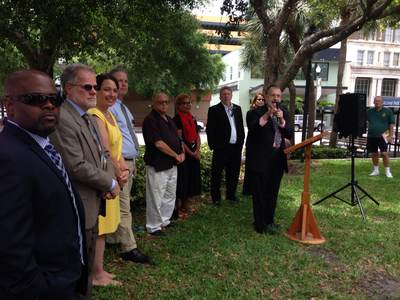 According to members of the Sierra Club, Florida ranks third in the nation for solar energy generation potential, but currently ranks only 17th for clean energy production.

Frank Jackalone was one of the fifty people rallying in Williams Park this afternoon. He is the organizing manager of the Sierra Club.

“So our feeling about this is that the elected officials reflect the will of the people who they represent. That’s why we’ve had so many elected officials say, ‘sure, I’ll sign onto this.’ And they know that Duke has taken a lot of money from people’s pockets for nuclear power plants that will never be built- and that they should be doing more on solar energy and making our homes and businesses energy efficient, but they’re not. So they’re joining us to invite Duke. Invite Duke to join us, to go to Tallahassee to the Florida Public Service Commission, and to say, change the rules so that we can do more- and ultimately the PSC will listen to the utilities. They’ll listen to Duke, they’ll listen to Florida Power and Light. Ya know, but Duke really isn’t asking that question. Duke likes business as it is right now, where they’re profits are guaranteed. So, you know, they need to do more for us and we’re hoping this message county commissions, city council members, mayors of local cities in the area, Congresswoman Kathy Castor, State representative Dwight Dudley, and so forth, that this will have an impact on Duke, and Duke will say, Okay let’s talk.”

Jackalone urges Duke Energy to invest in clean energy now, before the Florida Public Service Commission meets. He says the PSC’s decisions could affect Florida’s energy choices for many years.

“We ask you to join us, to say that energy efficiency and solar needs to be at the top of the list for Duke, in that next cycle, and when the PSC meets in July. And we want the PSC to come down here. Public Service Commission come down here. Hold a hearing right here- let the people speak. Let our elected officials speak directly to you, without us having to take buses to go to Tallahassee.”

According to the American Council for an Energy Efficient Economy, twenty-six states have better energy efficiency and conservation programs than Florida.