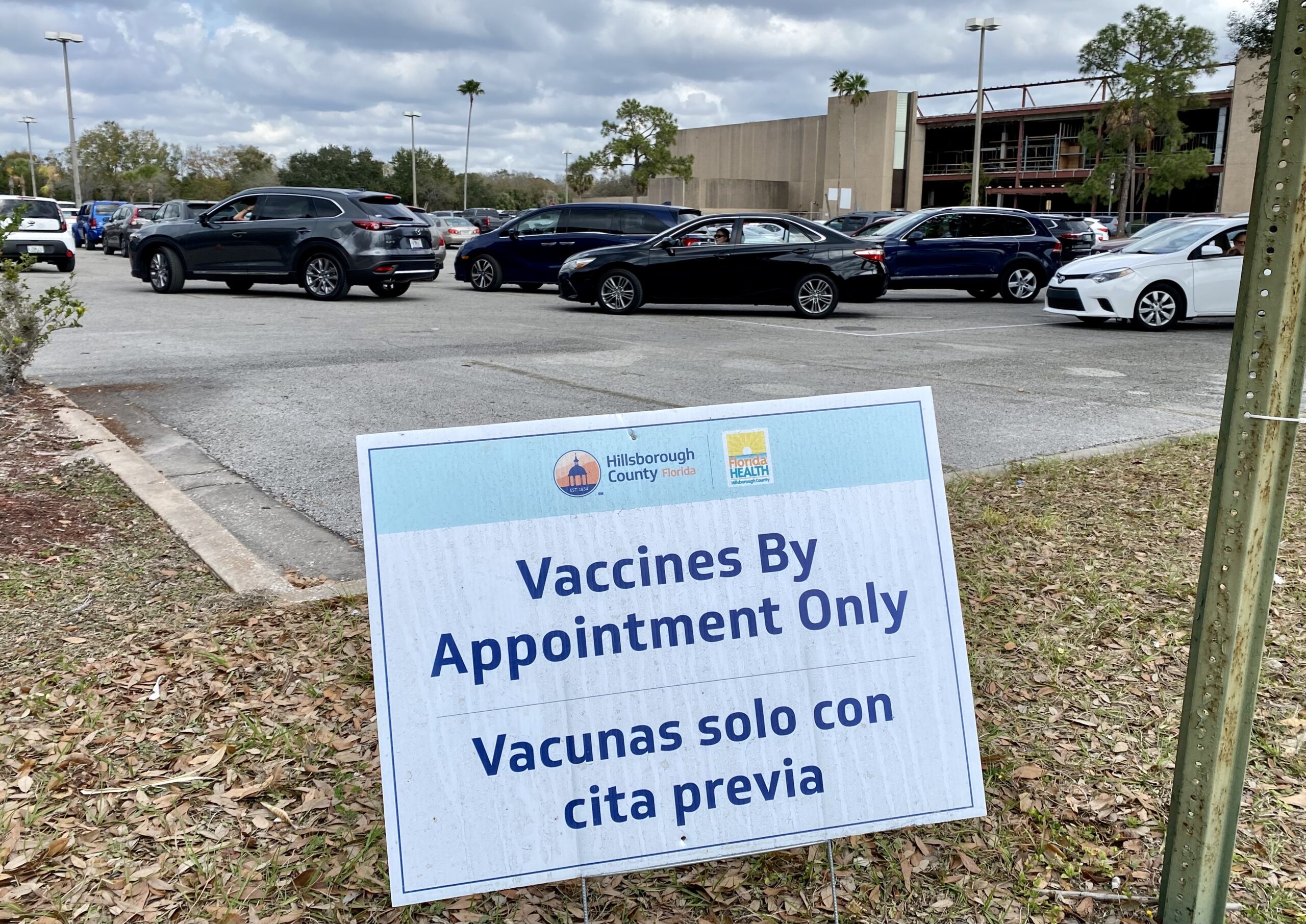 A state-run vaccination site in Tampa was still plagued by confusion and long waits Friday, a day after reports emerged of hourslong waits and seniors being turned away Thursday at University Mall.

Seniors, even those with appointments, were waiting at least three hours with some waiting much longer for their coronavirus vaccine.

To pass the time some read newspapers, some caught up on novels or kept their brains sharp with crossword puzzles. One woman looked at a retiree’s guide to life in Mexico excited to take a trip after being home for nearly a year.

His oxygen is running out

Others, like James Smith and Marie Brown, just hoped they’d make it to the top of the parking lot roof to get their shot before running out of time.

“We may not be waiting that long because his oxygen is running out,” Brown said.

“I’m on oxygen. I told them I can’t stay up there long or be out there long. They said well, it won’t take more than 15 minutes and we’re still here,” Smith said.

“About an hour and a half.”

Smith called to request an appointment about two weeks ago. When he did, he made sure to note he had chronic obstructive pulmonary disease or COPD, a lung disease that severely limits someone’s ability to breathe. The 76-year-old Wesley Chapel man was told to be at the University Mall site on Feb. 12 for an appointment at 12:15 in the afternoon. Brown drove. They got their around 10:30 a.m. and nearly two hours later were only halfway through the line.

Sitting in hot car for hours and having waited two weeks for an appointment. Smith only had about 20 minutes of oxygen to get him through two more hours of waiting. They tried to alert members of the National Guard and law enforcement on site, but were just told to wait.

“I spoke to the National (Guard), the officer back there. He said he can’t do anything. He only directs traffic.”

Brown and Smith’s story wasn’t unfamiliar. WMNF spoke to people in about six vehicles at the site during the late morning and early afternoon. Each had an appointment and each reported waiting at least three hours to get a shot.

Janet Hewitt said her experience was frustrating as well. She tried to get an appointment when the online registration system was up, but to no avail. Now that you can preregister and get a call for an appointment she said it was much easier.

“It would say that all the appointments were filled over and over. And you’d have to be online waiting and the little dots would be dancing and it’s frustrating to go through that whole thing. Then they changed the system. I had registered right away. And they finally called and said you can come.”

Yesterday, the Florida Health Department in Hillsborough County told reporters from the Tampa Bay Times waits were at least due in part to people lining up without an appointment. Up until about three weeks ago the County ran the site and told people getting their first shot to automatically come for the second shot, appointment or not. But when the state took over the site the rules changed. Everyone needed an appointment regardless. The Health Department said some hadn’t gotten the message.

But on Friday most seemed to have an appointment. The site was just overrun. The line of cars stretched nearly two miles down Fowler to McKinley Drive. Just getting into the mall took hours. Once at the site, cars were split into six lines that slowly snaked their way to the vaccine site. Another few hours to wait.

After getting their shots, many said nurses seemed overrun and overworked. Staff on site who asked to be named said they asked for more help but were told they’d have to make do with what they had.

Waiting for hours in line, many, like Hewitt, were just happy for the little vial of hope waiting on that parking lot roof.

“I’m pretty relieved. It’s a shame that it’s this long of a wait. But I understand you’ve got a lot of seniors that you’re dealing with. But I’m high risk so I’ve been hiding out in my home a year now. And been scared to death to be near anybody. Other than doctor things, I’ve just been hiding out. So this is gonna be wonderful to free me up to have a life again.”

Representatives for the Department of Health did not respond to a request for comment.