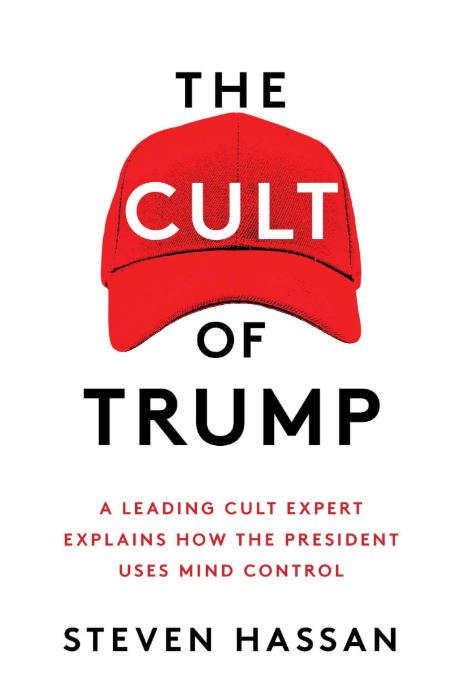 Later in the program we’ll talk with cult expert Steven Hassan about his latest book The Cult of Trump: A Leading Cult Expert Explains How The President Uses Mind Control (Simon & Schuster). Hassan is himself a former cult member (The Unification Church) and since becoming free he has helped others leave mind-controlling groups. Hassan writes that President Trump has gotten where he is today in large part because he has exploited tactics straight out of the cult leader playbook.  These include his grandiosity, his practice of sowing confusion, lying about the facts, claiming that he is misunderstood and being persecuted, his demand for absolute loyalty,  his belittling of critics and political opponents, and his cultivating of an “us versus them”  mindset. Hassan says these are the same methods used by Reverend Sun Yung Moon, Jim Jones, and other cult leaders such as L. Ron Hubbard (Scientology), David Koresh (Branch Davidians), Lyndon LaRouche (LaRouche PAC), and, most recently, convicted trafficking felon Keith Raniere (NXVIM).

Our first guest is Thom Hartmann, the host of the progressive radio show (The Thom Hartmann Show) and a New York Times bestselling author. In his new book (THE HIDDEN HISTORY OF THE SUPREME COURT AND THE BETRAYAL OF AMERICA- Free Press) he explains how the Supreme Court has gone beyond its Constitutional powers and how we the people should take that power back.

Hartmann argues it is not the role of the Supreme Court to decide what the law is but rather the duty of the people themselves.

Does the Supreme Court have the power to strike down laws? Hartmann says according to the Constitution, it doesn’t. From the founding of the republic until 1803, the Supreme Court was the final court of appeals, as it was always meant to be. So where did the concept of “judicial review” start? As so much of modern American history, it began with the battle between the Federalists and Anti-Federalists, and with Marbury v. Madison.