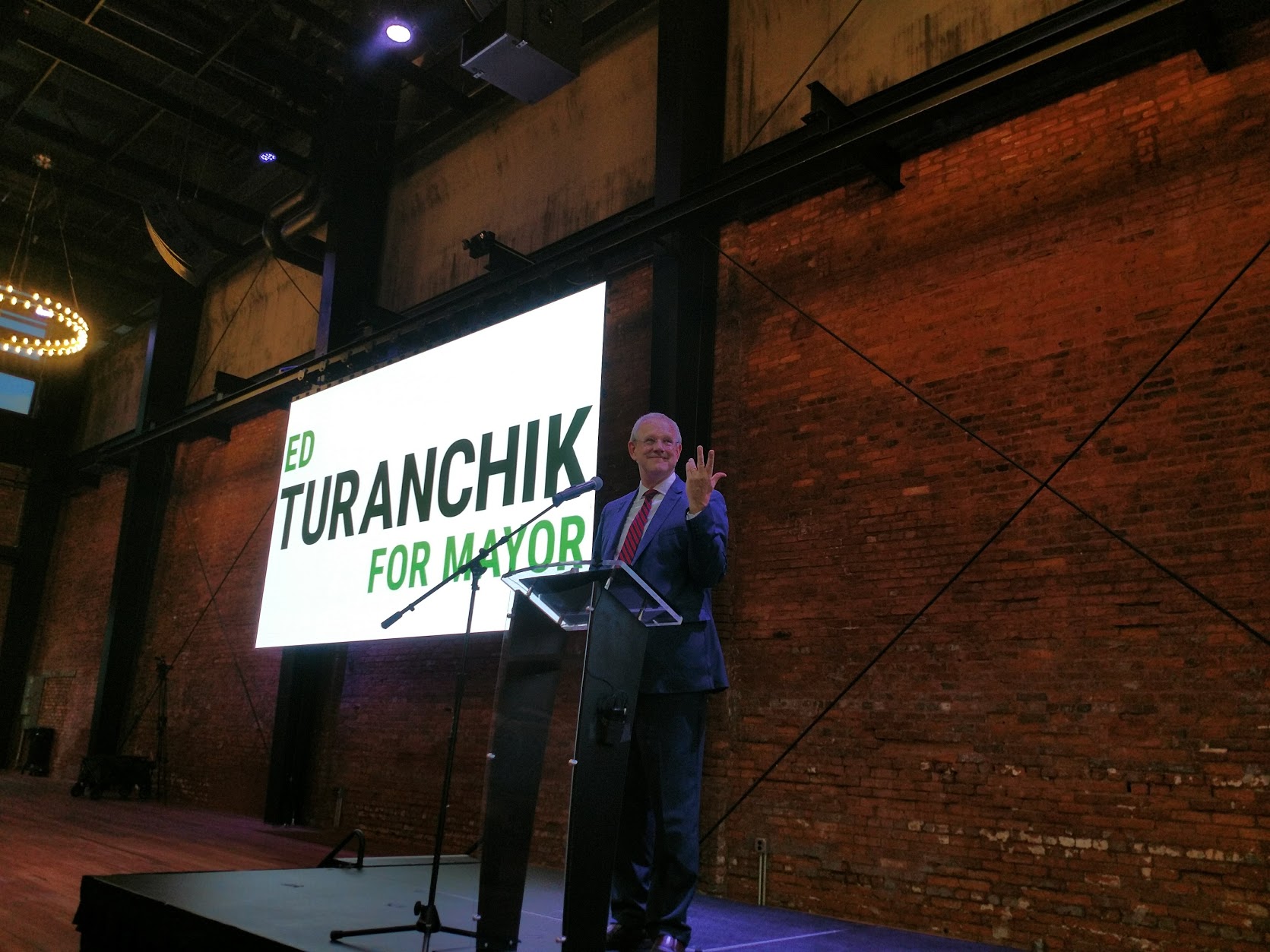 Although the next mayor of Tampa may not be known for more than a year, Ed Turanchik is sure off to a swift start.

The 62-year-old attorney and civic activist has already raised over $100,000 since entering the race in late January (including more than $41,000 in his political action committee), and had a crowd of several hundred people gather at the uber hip Armature Works building in Tampa Heights early Monday evening to officially kick off his campaign for the 2019 mayoral election.

The formal program began with a slick video featuring several high profile supporters from both sides of the aisle giving testimonials to his vision, the word that he has seemingly branded to describe his candidacy. It was then followed up with an introductory speech by his son John Winston, before the man himself addressed his audience.

Turanchik spoke for 19 minutes, where he emphasized that housing, innovating and transit would be the key pillars of his vision for Tampa.

Turanchik is probably best known throughout his public life for his advocacy of transit, and he talked up efforts to expand behind the Cross-Bay Ferry pilot project that allowed the public to commute from Tampa to St. Petersburg and back for six months in 2016-2017. He promised that under his leadership, ferries and water taxis would be so robust by 2024 that the region would be compared to Sydney, Australia and Seattle in that form of public transportation.

He also said that his administration would create what he called Tampa “go-zones,” places in the city like the Westshore area, USF and downtown that would connect to urban corridors “where the quality of transit out of the box is good enough that people don’t need to use their car to get from where they live to where they work.”

In addition to showing early financial support, Turanchik has assembled several high profile supporters from both sides of the aisle to give him early backing , including former City Councilwoman Linda Saul-Sena, former Hillsborough Commissioner Joe Chillura, former state legislator Jim Hargrett and former 970 WFLA morning show host Tedd Webb, who in the promotional video explained what he has told his conservative friends why he is backing Turanchik.

Turanchik hasn’t actually served in office for nearly twenty years, going back to when he was finishing up his second term with the Hillsborough County Commission. He touted his accomplishments while serving on that board (which included Phyllis Busansky and Pam Iorio), such as helping to pass the 1991 indigent health care tax, the 1996 Community Investment Tax, and the passing of a human rights ordinance in 1991 that for the first time included protections for the gay community (the measure was subsequently repealed in 1995, before the BOCC  expanded civil rights protection for people who are gay, lesbian and transgender in 2014).

He called housing the “sleeper issue” of the upcoming campaign, decrying the fact that the development taking place throughout the city that is hailed by those in the business community has a downside in squeezing out middle-class people from being able to live in the city. He said Tampa would have a “market oriented solution to address growing affordable housing” and discussed a program of having renters being able to purchase rehabilitated and older rental properties and converting them to new homes.

There was also talk of an Office of Innovation and Public/Private partnerships, which he said would provide a “fresh approach” to offering public services at a lower cost and greater efficiency to the taxpayers, while fostering a culture of private sector development.
And that wasn’t all. Turanchik closed out his speech by saying that he wants to make public education a priority for his administration.
With the announcement last week by City Councilman Harry Cohen that he has now entered the race for mayor, there are now four candidates in the race to succeed Bob Buckhorn that may not take place for another year. Businessman Topher Morrison and Michael Hazard had previously entered the contest, and former police chief Jane Castor, councilman Mike Suarez and philanthropist David Straz are expected to follow before summertime.
While the Tampa mayoral election is scheduled as always for the first Tuesday in March next year, a new statewide directive to allow those overseas to have access to a ballot some 45 days before election day means that if there is a runoff, it won’t take place until May of 2019, some 13 months from now.