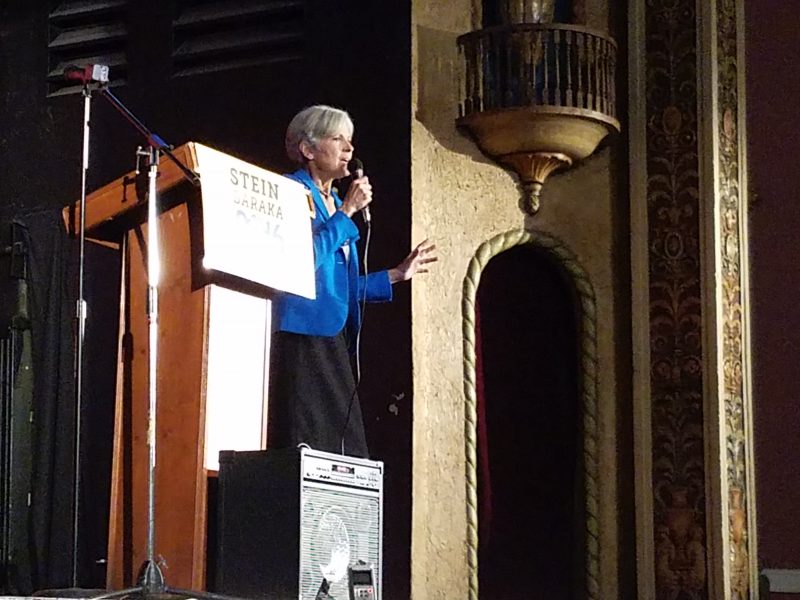 The Green Party’s presidential nominee told a raucous crowd of about 300 people packed into the Cuban Club ballroom in Ybor City Wednesday night that she hopes to be the choice of the millions of voters who are turned off by the two major party nominees; Jill Stein appealed for the youth vote and compared progressives who vote for the “lesser of two evils” to someone in a harmful relationship who can’t walk away from abusive politics.

Only Donald Trump and Hillary Clinton were allowed to participate in this week’s presidential debate at Hofstra University. Stein, Libertarian Gary Johnson and others were excluded. Stein praised the 24 people who were arrested at Hofstra demanding to open the debates to more candidates.

“So this is what democracy looks like! Thank you, Florida.

“Democracy does not look like that fake debate, the night before last, at Hofstra. That’s not a debate, that was a police state that we saw at Hofstra, with 1,000 police, with 7 or 8 layers of barrier fences and suppression of our voices. There were 24 brave, courageous, heroes of democracy, who put their bodies on the line, to call for an open debate that we must have in this election.”

Stein said the government bailed out the bankers after they crashed the economy in 2008, so it could bail out the generation of students buried in debt.

According to Jill Stein, many voters under the age of 35 have already broken up with the Democratic Party and are looking for someone else like the Greens. Stein responded to several questions about whether people voting for her could tilt the election in Donald Trump’s favor.

“Hillary actually has a track record. Donald Trump wants to bar Muslims from entering the country, but, Hillary Clinton has been busy bombing Muslims. One million people, in Iraq alone, were killed in the course of the U.S. war, which Hillary supported. Hillary then led the charge into Libya.

“Right now, Hillary wants to start an air war over Syria, creating a no-fly zone, which basically means we go to war with Russia, a nuclear-armed power. By the way there are 2,000 nuclear weapons right now, on hair trigger alert.

“Instead of using diplomacy and collaboration to find a way forward, Hillary has been beating the war drum. Part of this surrounding of Russia with troops and missiles and nuclear weapons, in fact. This is the Cuban Missile Crisis on steroids, but, in reverse. How would we be feeling right now if Russian troops were on our border and their missiles and nuclear weapons were? Not good.

“We need to diffuse this situation, quickly, before it blows up on us. Hillary Clinton has shown no inclination or understanding. Yes, she has experience, but, that experience is not good in terms of war, in terms of Wall Street, and her collusion with the big banks. The Clintons, with Hillary’s support, Bill signed the Wall Street deregulation, which led to the crash and the meltdown of our economy and the disappearance of 9 million jobs and the theft of 5 million homes.”

One of the largest ovations of the night came when Jill Stein asked if there were any Sanders supporters on her side.

Stein says she wants to cut military spending and use savings on a “Green New Deal” for clean energy and jobs.

Stein criticized the recently signed U.S. military aid package to Israel worth $38 billion dollars and said she supported the nonviolent BDS movement to end the Israeli occupation of Palestinian lands so Jews and Arabs could live side-by-side in peace.

Stein says all the nuclear power plants in Florida need to be taken offline before, in her words, they “go Fukushima” because of sea-level rise.

“My focus, right now, is on informing and empowering the American voter to make decisions, because, in this election we’re not just deciding what kind of a world we’re going to have, but, whether we’re going to have a world or not, going forward. Whether Florida is going to be here

or not, just a couple decades from now, when the science is telling us we can expect as much as 9-feet of sea level rise as soon as 2050, if we don’t turn this around.

“We cannot wait for decades to turn it around. Science is telling us we have to zero-out fossil fuels in the next 17 years. This was this report, just last week, from Oil Change International, and it’s just one of many, very compelling, data points now, that tell us the best science–the most cutting edge, forward-looking science tells us–we have an emergency on our hands, but, fortunately we can mobilize and turn that emergency into a transformation of an economy and a world that’s gonna work for all of us, far better, more sustainably, more justly, than it does right now and more peacefully than it does right now, for all of us.”

But it’s not just climate change that has the potential of destroying the environment in Florida. Stein pointed to the massive sinkhole that dumped more than 200 million gallons of contaminated water into the aquifer at a Mosaic phosphate processing plant in Polk County and warned against the company’s plans to expand mining in Manatee and Hardee Counties.

“It’s a sad commentary on our government that they are paying more attention to their big money sponsors, like the phosphate company, for example, that wants to now expand this assault on the ecosystems–the fragile and critical ecosystems–that are so important to Florida’s tourist economy. It’s not only the economy, it’s also the survival of the state, because if the water supply, now–the major aquifer for Florida–has been polluted by hundreds of millions of gallons of this toxic sludge from the phosphate mining industry.

“We have to go back to the drawing boards. This is not negotiable. Florida needs a drinking water supply.”

Jill Stein will hold a rally Thursday at noon in Sarasota at the Robert L. Taylor Community Center.

At 6:00 p.m. Thursday, Stein will be in Orlando at the Flamboyan Banquet Hall at Acacia’s El Centro Borinqueno.

On Friday, Stein travels to Miami Dade College for a rally at 6:00 p.m.

Here’s video of the first half of the Jill Stein rally in Tampa:

Here are a few “opening acts” before Jill Stein took the stage: