A sensual way to watch the sun come up in the morning. Music that you not only listen to but you feel. This show is more than a radio program- it’s an expression. It’s about old loves, new loves, and loves yet to be discovered. So come over and lay your feelings on your radio in The Love Zone with Cen-Flo. 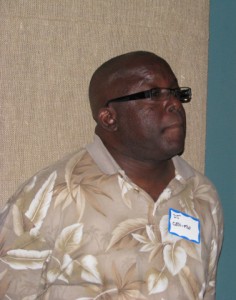 Songwriter and radio show host DJ Cen-Flo was born on July 6, 1962, in Detroit, Michigan. Cen-Flo pulsating beats, energy and informative show made him a force at WMNF. par
From an early age, Cen-Flo had made music his life. The child of parents who were music fans who owned a lot of records, Cen-Flo spent the majority of his childhood listening to and studying his parents music. Never one to shy away from performing in the spotlight Cen-Flo was popular at family gatherings and school programs as a dancer. With James Brown as the one artist he emmulated most.

Cen-Flo has always possess the magic of knowing what to play and when to play it. Known as the ultimate "party starter" Cen-Flo brings that magic to his show.

Upon graduating high school in 1980 Cen-Flo enlisted into the United States Air Force. It was there he gained his reprutation as a party pumping house party DJ. In 1985 he transitioned his talents to radio when he became the host of his own show on WAFB radio at Wurtsmith Air Force Base, Oscoda, Michigan. The popularity of his show won him acculades from base brass and resulted in an invitation to join Armed Forces Network. An invitation he regretfully declinded.

In 1985 Cen-Flo discovered other musical talents; songwriting and rapping. Performing under the name MC Chill Lee, he performed at various venues throughout Central Florida while assigned to Sunshine Records out of Temple Terrace, Florida.

In September 2007, Cen-Flo became a member of the WMNF family and started The House Party and never slowed down. The popularity of his show and personality resulted in him receiving the 2013 Outstanding Programmer of the Year.