Home From A Woman’s Point of View 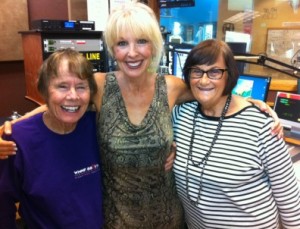 An eclectic feminist/womanist radio magazine hosted by Mary Glenney and Arlene Engelhardt. Music is mixed with arts and multicultural features including interviews, film and book reviews, announcements, news, speeches and documentaries by and about women.

Mary Glenney, co-host and principle interviewer, “From a Woman’s Point of View.” She began doing a segment called “Life Choices” on the Women’s Show more than 20 years ago and within two years became the co-host. She spent much of her professional life doing research and writing about genetics. Mary has an M.D. degree from the University of Illinois. She has been an activist most of her life, focusing on the environment, politics, social justice and equality for women and minorities.

Arlene Engelhardt, co-host, “From a Woman’s Point of View.” She was president of the Board of Directors at WMNF during the station’s capital campaign and construction of the current building. Arlene was the Executive Director of the Pacifica Radio network. She has a B.A. from the University of Illinois. She, too, has been an activist most of her life, focusing on the environment, politics, social justice and equality for women and minorities.

Support From A Woman’s Point of View