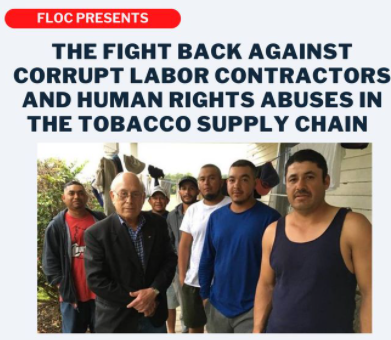 A union representing farm workers across the country Thursday delivered a petition to the U.S. Department of Labor calling for an end to what it calls corrupt practices among labor contractors who hire migrant workers using the H-2A visa program.

The move comes after the union said a Florida-based contractor still hasn’t paid back stolen wages to nearly 200 workers he provided to North Carolina farms.

Migrant workers who come to the U.S. on the H-2A visa program aren’t supposed to be part of a pay-to-play system. But Francisco Marquez Escobar, who works on a North Carolina tobacco farm, said it still takes bribes for workers to even have a hope of getting into the country.

Marquez Escobar, a member of the Farm Labor Organizing Committee, or FLOC, spoke Wednesday night through an interpreter.

“I myself have many relatives and friends and other comrades that have paid up to$1,500 just to be able to obtain a job. And sometimes that job isn’t even fulfilled because they are defrauded and they don’t have an opportunity to step in the country,” he said. “This is becoming a huge problem. We know that workers who work with farm labor contractors get paid less and are robbed more.”

It’s been nearly eight months since the U.S. Department of Labor saddled SBHLP Inc. – a Lake Placid, Florida-based H-2A labor contractor – with nearly $500,000 in penalties. The Department ordered owner Salvador Barajas to pay wages back to nearly 200 migrant workers he was found to have stolen hundreds of thousands of dollars from.

But FLOC said Wednesday Barajas hasn’t paid those wages back. FLOC President Baldemar Velasquez said workers are unlikely to see that money. Abuses like those faced by Marquez Escobar and perpetrated by Barajas will continue until the Labor Department ends its collaboration with labor contractors.

“We’re making a call to get the Department of Labor to end these labor contractors from being involved in the H-2A program until they can find a meaningful way to uphold the standards and regulations in the H-2A program,” he said.

Farmers throughout the U.S. rely on migrant workers who come largely from Mexico and Central America to work their fields. The workers often live in camps and make their way across the country as the seasons change and new harvests begin in different states. But obtaining workers through the H-2A visa program can often be costly and time-consuming. Velasquez said that has given rise to an unregulated industry of labor contractors who provide workers to farms for a flat fee.

He said some of those contractors hide behind changing corporation names. They also pass the company between members in the rare instance they’re penalized.

“If you sue an employer for using the H-2A workers, the farmer who employs them directly with work visas, he has assets that can be held onto and held accountable for enforcing the wage laws and other things that cost money,” Velasquez said. “A farm labor contractor you cannot. He’s here today and gone tomorrow. He’s very elusive and very shifty and, like I said in the Barajas case, he just passes on the business to another relative.”

A system of inequities

FLOC’s list of demands doesn’t just include banning labor contractors from participating in the H-2A visa program. It wants to pull together farmers, workers and corporations who purchase goods. It wants talks to determine more sustainable pricing for goods and wages for workers. Many still live in poverty despite the visa program’s wage requirements.

“The procurement system that corporations designed, the pricing down in the supply chain, continues to pressure cheating workers and marginalizing workers and bringing impoverished workers to do the back breaking work they don’t want to do,” Velasquez said. “We’re talking about a system of inequity that has to be reformed and changed.”

Velasquez said migrant workers live in poverty because they are underpaid. He said paying better wages could not only help them improve their own lives, but take the burden off government support systems like food stamps and allow them to feed and clothe their own families.

“We’re dealing with hard working men and women and they deserve a fair day’s pay for a fair day of work.”