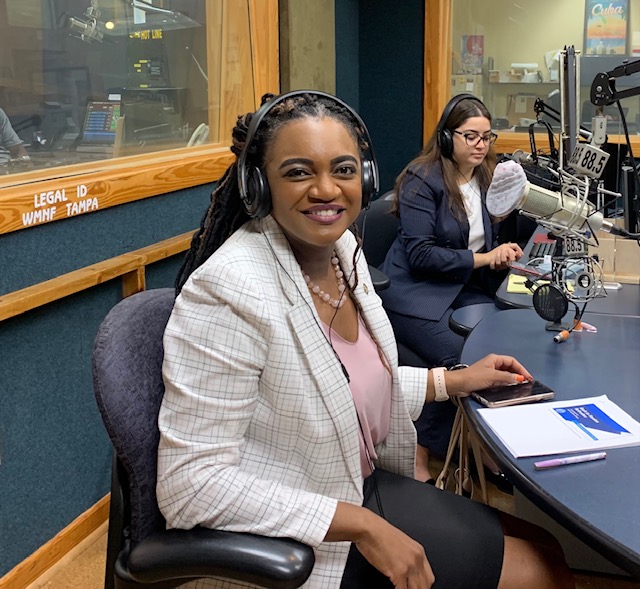 There was a time when State Rep. Fentrice Driskell, a partner at the Carlton Fields law firm, thought she might want to be an engineer. Then in 11th grade she took an AP class in government and economics.

“That class changed my life and my teacher changed my life,” Driskell said when she joined host Janet Scherberger in the WMNF studio on Aug. 25 for a special WaveMakers edition of MidPoint. WaveMakers offers an in-depth conversation with people making a difference in the Tampa Bay region.

You can hear the entire interview with Fentrice Driskell here or by searching for WMNF MidPoint wherever you listen to your favorite podcasts.

Driskell said that high school teacher saw her leadership potential and encouraged her to participate in YMCA Youth in Government programs, Model United Nations and Girls State in Tallahassee, where she met then-Gov. Lawton Chiles and had her first experience arguing on the House floor in the state Capitol.

“It gave me the bug and shifted me away from the hard sciences and more toward government,” she said.

Today, Fentrice Driskell is a rising star in the Florida Democratic party. She was first elected to office in 2018, defeating Republican incumbent Shawn Harrison to represent the New Tampa area in the Florida Legislature. She’s in line to be the House Democratic Party leader in 2024. She’s a graduate of Harvard University, where she was the first African-American elected president of the student body.

In the 2021 legislative session, Driskell helped hammer out a bi-partisan police reform bill that, among other things, mandates a duty to intervene if another officer is doing something wrong, requires more transparency in use of force incidents, limits the use of chokeholds and sets a minimum age for arrests.

“It was a collaborative effort between the Florida legislative Black caucus, the House and Senate Democratic caucuses and the Republican leadership and I was tapped to serve as the lead negotiator with all of that,” Driskell said of the police reform bill, which passed both chambers unanimously, the same year that the Republican-led legislature passed a so-called “anti-protest” bill that many see as an affront to Black Lives Matter activists.

Driskell notes that everyone came to Tallahassee in the last session with heavy hearts in the wake of the murder of George Floyd.

“Regardless of party, everyone felt like something needed to be done,” Driskell said. “Does it go as far as I want it to go? No. Does it go further than some of colleagues across the aisle want it to go? Yes. That’s how I know it’s a good bill. It’s a good first step forward.”

Driskell said she hopes to see more reforms in the upcoming session.

She also is working with Tampa City Council member Luis Viera on a monument to recognize racial lynchings in Tampa.

Such markers, she said, are important for facilitating discussions about a difficult history.

“It allows us to talk about our shared humanity, to talk about racism, to talk about all of these things that are uncomfortable to talk about,” she said, noting that there was a time when Florida had more lynchings per capita than any other state in the country. “It’s a part of who we’ve been.”

The language for the marker is complete and Driskell, Viera and others are working to find a location for it.

“We’re getting close,” she said.