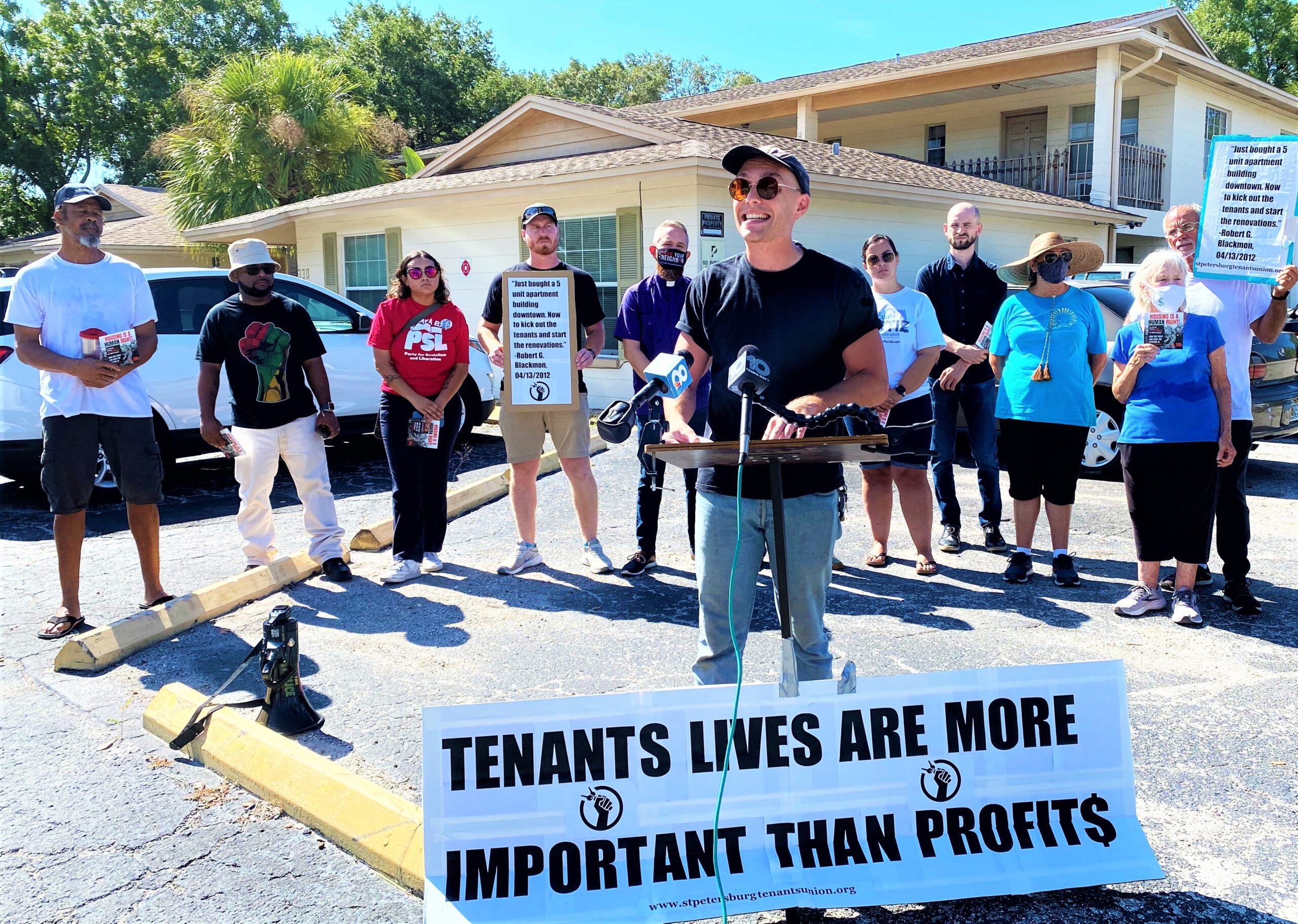 Blackmon is again under fire for evictions and maintenance issues. The St. Pete Tenant’s Union Tuesday held a news conference outside one of Blackmon’s properties.

If not for the St. Pete Tenants Union, Terrance Gordon doesn’t know if he’d still have a roof over his head.

Gordon, a 62-year-old Army veteran, has lived in the Paradise Apartments for eight years. Blackmon bought the property on Third Street and 45th Avenue South in April. In June, Gordon received an eviction letter for not paying rent.

Gordon was one of the millions of Americans forced into financial hardship during the COVID-19 pandemic. Gordon, a cancer survivor, is on a fixed income and has rent subsidized by the St. Petersburg Housing Authority. He was supposed to be protected under the current pandemic-related eviction moratorium.

But fighting evictions in Florida can be difficult, especially for low-income and vulnerable populations. In order to even try to fight one in court, a tenant has to provide the court with any funds owed to a landlord. For someone fighting eviction for non-payment, court costs can make it a non-starter.

“If I would’ve had the money I would’ve gladly gave it over to him,” Gordon said.

Blackmon voluntarily dismissed the eviction last week, along with two other evictions at the same property. But that was after the St. Pete Tenants Union stepped in.

“It is our belief that there was little, if any, effort exercised on the part of Blackmon properties to improve conditions and to work with residents who had been behind on rent prior to the involvement of the Tenants Union,” William Kilgore said.

‘People don’t cook in the summertime’

Kilgore started the Tenants Union last year to give Tenants a voice. He said the Tenants Union inspected the property last month. It found a number of maintenance issues, including residents being without appliances for months. The Tenant’s Union wrote a letter to Blackmon and his mother, Carolee, who runs day-to-day operations, demanding repairs. Within days, maintenance crews were at the property.

“Carolee Blackmon and Robert Blackmon did not have a change of heart. They were pressured into this. It’s the organizing that made this happen,” Karla Correa, a member of the Tenants Union and the Party for Socialism and Liberation, said “And she especially didn’t care because she told another tenant prior that because they had a broken stove there was no urgency to fix it. Because, she said, ‘people don’t cook in the summertime.’”

Blackmon’s mayoral campaign emailed a statement to WMNF Monday. It said he immediately began repairs after purchasing the property on April 30 but residents were non-communicative and non-paying. Blackmon said he is quote “We are moving forward with a six-figure repair and renovation of Paradise Apartments. We are not currently seeking eviction of any resident of Paradise Apartments, and are committed to making this property something the residents of Paradise and the community can be proud of.” End quote.

‘Kick out the tenants’

On April 13th 2012, Blackmon wrote a Facebook post that read: “Just bought a 5 unit apartment building downtown. Now to kick out the tenants and start the renovations.”

Court records show the evictions filed at Paradise Apartments have been voluntarily dismissed for now. The evictions were dismissed without prejudice, meaning the case could be refiled. Kilgore pointed out that Blackmon can still force tenants out. He can choose to not renew leases or refile evictions when there’s less political pressure.

Rents are rising in the Tampa Bay area at some of the highest rates in the country. Kilgore said tenants, especially those in vulnerable communities need more protection. He said Blackmon can use Paradise Apartments to set an example.