Home WMNF News Florida deals with fish kills, red tide and a hurricane ahead of Fourth of July 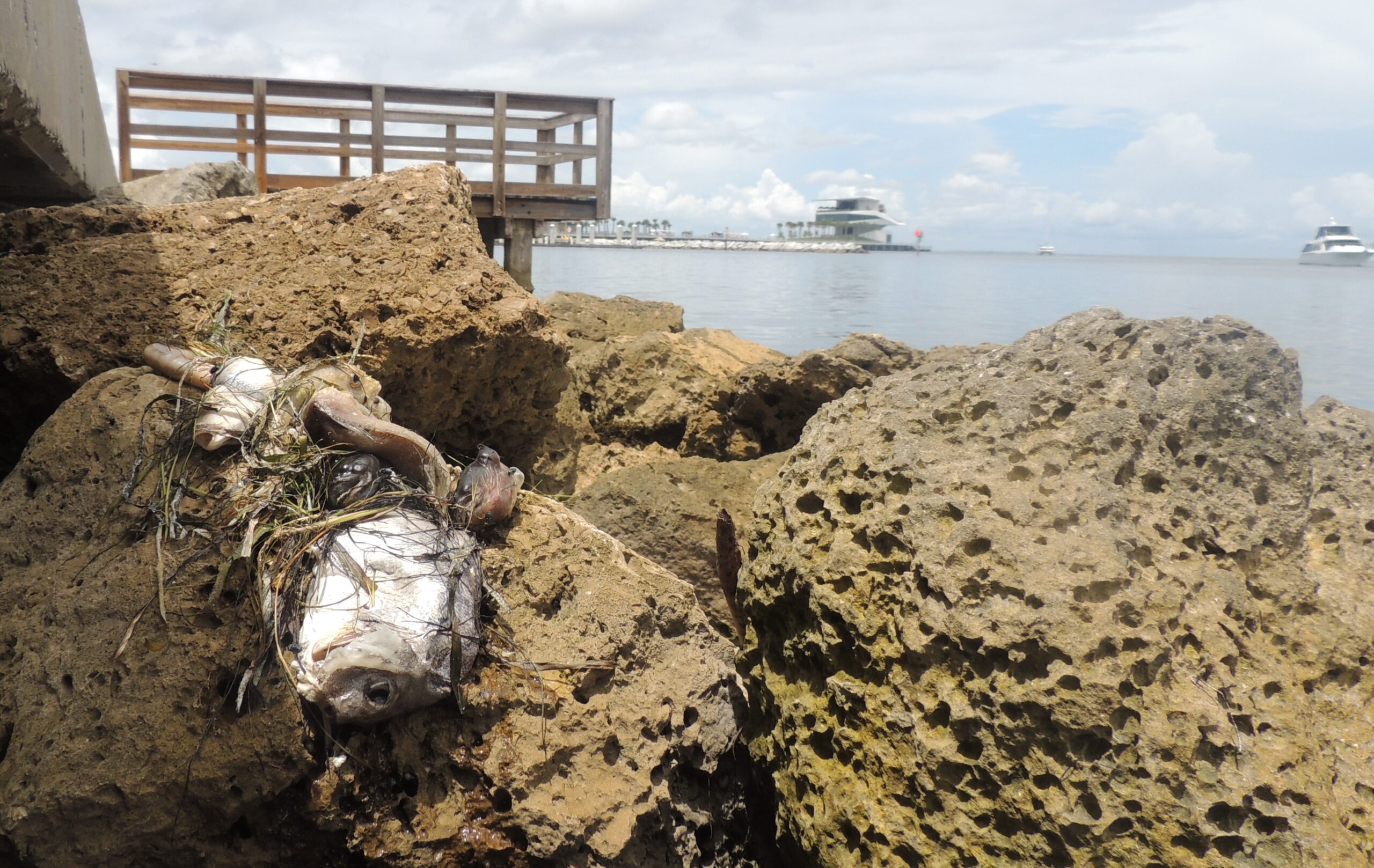 Florida is dealing with fish kills, strong Red Tide blooms and an approaching hurricane as cities get ready for the Fourth of July weekend. As thousands of dead fish float along the coast of Tampa Bay and beyond, celebrations are moving forward.

Patty Ann Lomax has lived on sailboat in the marina next to the Pier in St. Petersburg for eight years. In that time, she hasn’t seen anything quite like it.

“The last time the state had a real bad outbreak of Red Tide we didn’t get it at all,” Lomax said. “I’m sure it’s not gonna be a pleasant odor if it doesn’t clear up.”

The smell on Friday wasn’t as bad as it was Thursday, but overturned, bloated and rotting fish continue to wash into the marina by the hundreds. At nearby Demen’s Landing, low tide left rocks along the seawall littered with trash and fish carcasses. The rotting bodies left to bake in the hot summer sun creating a nauseating aroma of saltwater and death.

Fish kills have been reported as far north and east as Flagler County in the last week. More reports litter the east coast, wrapping around the state and heading up to the Nature Coast on the Gulf side.

But that hasn’t stopped planned celebrations across the bay area and the state. City crews in St. Pete have been working to scoop as many dead fish out of the water as they can. Sunday’s fireworks celebrations are a go in the city.

The same holds true in Tampa where Mayor Jane Castor Friday announced the city’s Boom by the Bay event will go ahead, even as Florida prepares for a potential hurricane. Hurricane Elsa began making its way across the Caribbean Friday as a category 1 hurricane with 85 mph winds. All of Florida is in its potential path right now. And it’s expected to hit the state as a tropical storm early in the week.

But Castor said she got the go ahead that the storm will stay away for a few days more at least.

“Boom by the Bay is a go,” Castor said. “We just had a call this morning with a representative from NOAA, and Dan, who we refer to as Dan the Man because he told us Sunday afternoon is going to be perfect for Boom by the Bay. That we should have some showers in the morning, but it should be clear in the evening.”

Back in St. Pete, the fish kills surrounding Pinellas on both bay and Gulf sides are keeping many, like Juan Diaz, from the water.

“I haven’t gone there in probably two months. I usually go, like, regularly every week. But because of the news I haven’t gone. It’s keeping me from swimming.”

The toll of tide

And medical experts are urging caution around the holiday weekend. Dr. Lynn Ringenberg has seen pools of dead fish floating from Bayshore Boulevard to the Gandy Bridge. She said that should be a warning sign to anyone planning on being on or near the water. Red Tide can cause respiratory issues in even healthy people. It’s also possible to bring harmful bacteria home where it can harm family members, especially the medically vulnerable.

“I wouldn’t be getting into water with my children or anybody with dead fish floating around.”

Researchers with the state, University of South Florida, and the Tampa Bay Estuary program are investigating whether current Red Tide outbreaks are related to the 215 million gallons of contaminated water spilled from the Piney Point phosphate plant in April.