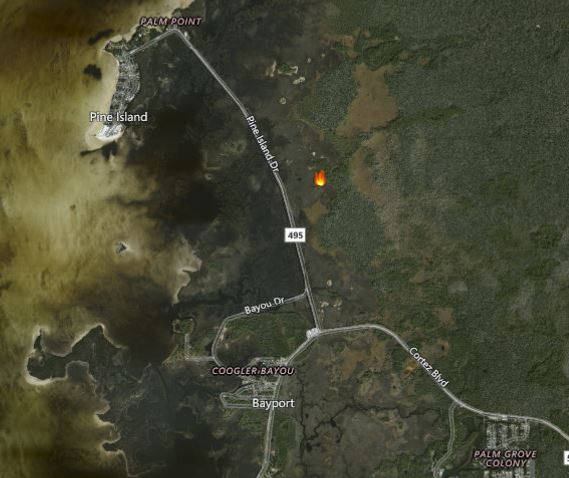 The Florida Forest Service is responding to a series of wildfires along the west coast of Hernando County.

In a press release on Tuesday, the Withlacoochee Forestry Center-Florida Forest Service says three wildfires broke out after lightning strikes Monday around 6:30 p.m.

“The Shoal Line Blvd Wildfire was 100% contained at acre.

“The Preserve Wildfire was 75% contained and 8 acres.

“The Marsh Wildfire is currently 185 acres.

“No homes are threatened at this time and the cause of all these wildfires is lightning.”

The firefight continues Tuesday. The Florida Forest Service says it “has three Tractor-Plow Units, three Engines and two Supervisors on scene of the Marsh Wildfire.”

The fire services stress that they’re still trying to determine how many acres are affected and that no homes are threatened.

Hernando  County recommends that people should exercise caution if traveling near Pine Island Drive and Cortez Boulevard because smoke from the fire is causing decreased visibility.

To find out more, including when Pine Island Park might reopen, call Hernando County Parks and Recreation at (352) 754-4027.