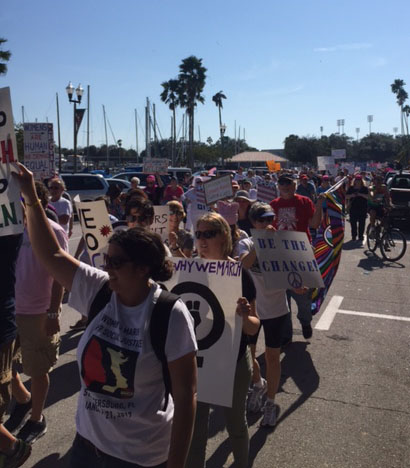 Thousands of people will protest President Donald Trump at his Mar-a-Lago resort in Palm beach this Saturday. Alex Newell Taylor is the West Palm Beach area captain for Women’s March Florida and is helping to organize the march.

Despite some media reports, Newell Taylor confirms that this march has not been canceled. One of the organizers has just dropped out.

“This is Donald Trump’s first visit to Palm Beach County, since he took office. Everybody here, who does not support his policies and his values and what he’s putting out there, we want to make it really clear that we stand in opposition to what he’s doing and that Palm Beach County doesn’t stand with it.”

Well, let’s talk about how many people you might expect. I mean, thousands of people are signing up on the Facebook event page. What do you expect the numbers to be?

“You know, it’s hard to tell, because of course not everybody is on Facebook. At this point, last time I checked a couple hours ago, we were at about 1,600 for sure, going, on the Facebook event and 5,000 interested.

“Generally, in the past, the rule of thumb has been to look at your RSVPs and cut it in half. We are learning with this new movement, because people are so fired up and passionate about their resistance to what’s going on in the Trump administration, that it’s kind of flipped to where now we’re expecting sometimes double of what we think we’re going to get because sometimes it just spreads like wildfire, at the last minute.”

President Trump’s compound, there in Palm Beach, is called Mar-a-Lago and that’s where there will be an International Red Cross ball that evening. Are you protesting The Red Cross, as well?

“No, we’re not. Our fight and our opposition is focused on Donald Trump and the policies that his administration is pursuing at this moment. We chose to have this event, on this night, because we knew he would be in town. We knew there would be visibility from Mar-a-Lago, of us, where we’re going to be protesting.

“I personally have no beef with The Red Cross. I know that these events are planned a long time in advance. Nobody’s looking to start a fight with The Red Cross or in any way disrupt the event. We are just there to send a message to Donald Trump.”