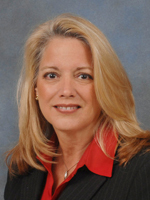 State Representative Kathleen Peters announced Tuesday morning she is one of six people running in the special election to replace Bill Young in Congress. From Pinellas Park, Peters and her supporters outlined why she should win the Republican primary and face Alex Sink in the closely watched special election.

Peters enters a Pinellas County race that could go either way. President Barack Obama carried the district in 2008 and 2012, but it was represented by Republican Bill Young from 1971 until he died last month. Peters says elected officials should put the people first.

We need to inject some common sense, some grit, and some gumption, into the dysfunctional Washington gridlock. And Ill tell you, if the craziness and dysfunction thats coming from Congress, stems from drinking from the water- what I can promise you is I will take my own Pinellas County water with me.

According to the Florida Division of Elections website, three Republicans qualified for the election by todays deadline. A survey by St. Pete Polls released Tuesday found Peters trailing David Jolly by 23 points. Republican Mark Bircher is also running in the January 14th primary.

Our countries problems are not going to solve themselves, and the time for the weak willed, the preening and the posturing men, kicking the can down the road, running a bigger and bigger debts and deficits, and inflicting hardships on American people has long passed. It is time to roll up our sleeves, face our problems, and make hard choices, and work together for our children and our grand-childrens future. We can not let the American dream die.

The winner of the Republican primary will face Libertarian Lucas Overby, write-in Michael Levinson, and Alex Sink – who has no Democratic challenger. The St. Pete Polls survey has Sink leading either Republican primary front-runner by double-digit margins. More than dozen local Republicans stood behind Peters during the announcement, including state Senator Jack Latvala, who called her opponents outsiders.

Alex Sink is from thona- Thonotosassa- cant even hardly say it, but its way outside on the other side in the woods, on the other side of Tampa. And David Jolly is from Washington DC. Hes been an insider in Washington DC- and has owned a home, here, certainly, and has worked for Congressman Young, but to the best of my knowledge, neither one of these people have worked in our community, have worked for our charities, have coached teams, and all the kinds of things that Kathleen has done.