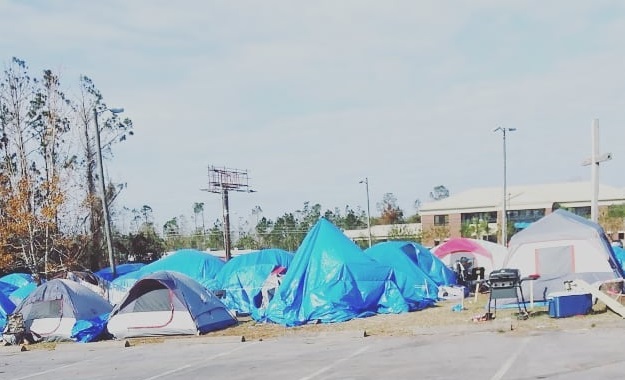 Hundreds of people are still living in a tent city near Panama City nearly seven weeks after Hurricane Michael ravaged the Florida Panhandle; like many of them, Tammy Nichols was evicted from her affordable-income duplex rental in the nearby city of Lynn Haven after it was damaged by the hurricane.

“My daughter is disabled and we have the four-year-old; it’s us three girls. We are in affordable-income housing due to her being disabled. Basically the hurricane came through and pretty much destroyed huge amounts – huge amount of damage there. So we were camping in the front yard and they came in and told us we had to leave. They came in and put up cattleman gates – the gates you see on ranches. And they locked the only entrance that we have. And it was basically, ‘either in or out.’”

I heard stories about people who already paid their rent for the month but they were kicked out anyway. They didn’t have any more money to rent another house.

“They can’t afford to have the beach hotels full of the workers that have come to repair the city, so there’s this whole other thing going on where everybody is just kicking everybody out whether the houses are damaged or not. And they’re jacking up the rents so they can accommodate the workers and the people that have been displaced that had made it to the beach so that they can come from the beach and then rent whatever properties are available in town. So, yes, they have taken money.

“Some of the employees that are here local that work for companies – you know construction workers, regular people, you know, jobs – what’s happened there is they’re going to work, they’re coming home and these landlords are throwing out their belongings on the side of the road, changing the locks. And then they don’t even have any belongings because people have gone by and seen nice, new stuff that’s not damaged. So then they’re ransacking it. So then the people are sitting here who had a house that’s not damaged and they’ve – the landlords have come in and basically just taken it from while they’re at work.”

Listen to part 2, which is about how they’re dealing with the cold snap: