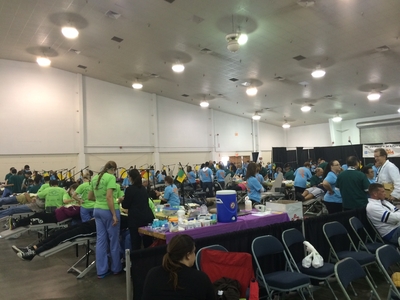 As many as 2,000 people from across the state are receiving free dental care Friday and Saturday at the Florida State Fairgrounds. This is the states first Mission of Mercy where the goal of hundreds of dentists and dental hygienists is to get people who dont have access to oral healthcare out of pain.

In a giant expo hall at the fairgrounds, several generators powered more than 100 dental chairs  all of them occupied by patients. The whirring of drills and suction hoses signaled to more than 1500 volunteers that their mission was working. Valerie Flowers, a Starbucks worker, showed up at 4:30 Friday morning on her day off to get fillings. She smiled and laughed as she finally left at about 11:00.

I was having problems with eating food and getting between my teeth and it was getting to the point that it was getting very irritable that I couldnt eat certain meats and stuff.

Hundreds of dentists, dental students and dental hygienists powered through patient after patient on track to meet their goal of offering fillings, tooth extractions and x-rays to at least 800 patients Friday. For many of the patients, some of whom camped out to be first in line, this is the only way they can afford basic dental care. One patient who received several fillings and asked to remain anonymous said she was relieved to have been able to take care of some cavities that would have only grown more painful because she couldnt pay for care.

No. No dental coverage, no money to pay for. I send my kids to the dentist because they come first.

The two-day event is geared primarily toward adult patients because children typically have more access to oral healthcare in Florida than their parents. But there is a small area with about ten chairs where dentists are treating families together. And the families come from all walks of life. Richard Cali is a private school teacher. He wasnt being treated, but his wife and children were.

I have a lot of kids, a large family. I have nine children. So, dental care tends to be pretty far down on our list of things to do. So, this is very much a blessing to our family.

It feels pretty good when they get the tool where the spinning part and they have this stuff that cleans your teeth.

Reporter: Did it make you feel special?

In addition to being treated, patients are also being informed about how to take their own preventative measures to keep a clean and healthy mouth. Dr. Leo Cullinan, co-chair of Florida Mission of Mercy, compared it to the old adage about it being better to teach a man to fish than to give him fish. Preventative care, he said, can prevent people from the same fate as one patient he described who, at 35-years old, needed all of his teeth pulled.

The point is, Gary started crying. Now, why was Gary crying? Well, I thought it was because he was concerned that he wouldnt have a set of dentures. It was actually tears of joy. He was so happy that somebody could take his teeth out which is kind of interesting and it speaks to the human condition because hes in so much pain.

Patients are also being sent home with a goody bag full of the basic hygienic necessities like tooth brushes, floss and toothpaste. This is all crucial to many of the patients who will be seen during this years Mission of Mercy.

The state of Florida is ranked about 48 in the country for Medicaid reimbursement. So, the reality comes down to one where a business decision needs to be made. If Medicaid reimbursement is covering 50% of overhead, not the profit, the overhead in the office, than it only becomes a matter of time before the dentist says I cant do this anymore.

That means a lot of dentists dont accept Medicaid as a form of insurance. But there are some resources. Tampa Family Health Centers offers some care as does Gulf Coast Dental Outreach in Dunedin. Many private dentists also provide pro-bono care for some low-income patients. But those resources are overwhelmed. It leaves people like Elaine Smith forced to decide whether to out of pocket necessary care, or go without.

Well, right now Ive got custody of four grandchildren and my funds are not very good.

Reporter: And dental insurance is expensive.

Oh yes it is. I went to another dentist and it was real costly. So, Ive been doing it slowly, slowly, slowly. So, I figured Id come here and see if I could get some help.

Reporter: Do you think you need some fillings or maybe some teeth pulled?

Reporter: What are you going to do after that happens? Do you hope they can point you in the right direction of some continuing care?

Oh yeah. Yeah, Id like some kind of service to help me get through this trying time with these teeth. Ive spent a lot of money on it.

Just after 11:00 this morning, about 25 people who had been standing in line for more than 2 hours were told by a volunteer to come back tomorrow. Dena Williams was one of them. She was told those patients remaining in line would be seen first when gates open again tomorrow morning. Williams said shell come back because she needs what few teeth she has left cleaned so she can keep them.

My son, hes the one [who] really needs it because he [has] insurance  I think he has insurance  but the insurance hes got, the people dont want to take it. Hes got a cavity and its infected.

For people interested in receiving care tomorrow, organizers recommend arriving as early as possible in order to be seen. The gates open at 5:30. The entrance to the event is on Martin Luther King Jr. Blvd. More information is on their website.