Only 1 left in stock

For a $54 donation, receive a copy of the novel Eternal Life: A Novel, by award-winning author Dara Horn. A New York Times Book Review Notable Book of 2018, Booklist Editors’ Choice Book (January 2019), and Chicago Public Library Best Book of 2018. Longlisted for the 2019 Simpson Family Literary Prize and the 2019 Wingate Prize. What would it really mean to live forever? Rachel’s current troubles—a middle-aged son mining digital currency in her basement, a scientist granddaughter trying to peek into her genes―are only the latest in a litany spanning dozens of countries, scores of marriages, hundreds of children, and 2,000 years, going back to Roman-occupied Jerusalem. Only one person shares her immortality: an illicit lover who pursues her through the ages. But when her children develop technologies that could change her fate, Rachel must find a way out. From ancient religion to the scientific frontier, author Dara Horn pits our efforts to make life last against the deeper challenge of making life worth living. 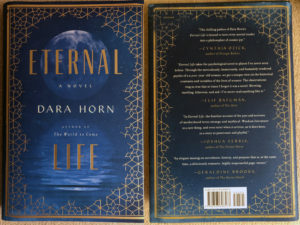 There are no reviews yet.

Be the first to review “Eternal Life: A Novel, by Dara Horn” Cancel reply