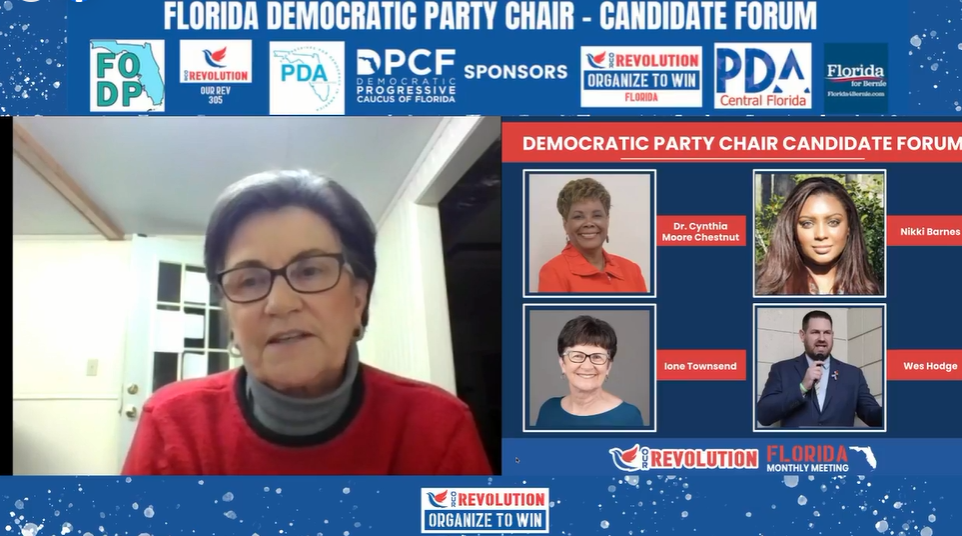 After being trounced by Republicans in recent elections, the Florida Democratic Party will vote to choose its new leader Saturday. Candidates met in a virtual forum Thursday, presenting the party with a challenge – continue a centrist path or follow the progressive lead that flipped Georgia blue.

The forum started with four of the six candidates on tap to be the party’s next leader in attendance. But in a stunning move, Nikki Barnes, who served as a Democratic National Committee member, used her closing statements to throw her weight behind another candidate.

“At this point, I will be suspending my campaign for FDP chair and I will be supporting Cynthia Chestnut. Because when I say we need to let Black women lead, I want to lead by example,” Barnes said. “And I encourage all of you to get behind me and get behind Cynthia in this race on Saturday. We absolutely can’t let Manny Diaz be the chair of our party.”

During the forum, which was hosted by progressive democrat organization Our Revolution, Chestnut described herself as a Centrist open to progressive ideas.

“I consider myself a centrist,” she said “For progressives I would ask you to help me to understand. To educate me on issues or in areas where you think I’m not up to the level that you would like.”

Diaz, a former Miami mayor and presumed frontrunner for the seat, was absent from the forum. He announced he was suspending campaign activities Wednesday, but is still in the race. Diaz said it was time to focus on what he called a “disgraceful coup attempt” in Washington. He was referring to extremist supporters of President Trump who launched a domestic terror attack at the Capitol.

Supporters of Diaz have praised his success organizing minority groups in the 80s and bolstering the party while serving as the city of Miami’s mayor from 2001-2009. He’s also got strong ties with deep-pocket donors like billionaire Michael Bloomberg.

But critics said its those same ties that make Diaz a liability. Saying he’d be too in line with the status quo that turned Florida from a swing state to nearly solid red.

Ione Townsend, chair of the Hillsborough County Democratic party and a progressive is running as well.

“It’s far too long that donors have decided how the FDP has…how and where they’re spending their money and that needs to change,” she said.

Susan Smith, is pulling for Townsend. She said Florida is at a turning point. Adding it should look to the success Georgia had in embracing progressive ideals to rally and energize its base. Stacey Abrams’ efforts in the Peach State are largely credited with getting a deep red state to vote for Joe Biden and choose two Democratic Senators.

“I think this last election and the Georgia election really opened people’s eyes,” she said. “We really need to build our local organizations. Do what Stacey Abrams did. Leave nobody behind. You’ve got to get out there everywhere in the state. Every county, every precinct and reach out to the voters.”

Time for a change

In order to do that, however, candidates agreed the party needs to take a look in the mirror. It needs to decide what it will be moving forward.

“We’ve got to take an aggressive stance on a platform that reflects our values and then drive that message home to our voters across the state,” he said. “For far too long we’ve been lacking in leadership.”

Townsend said part of that is looking at the party’s bylaws and structure. She said they give more power to the few metropolitan counties with the heaviest concentration of democrats.

“If we are a more inclusive party we can attract more diversity, we can recruit more diversity. We can bring more voices to the table,” she said. “And when you do that, when you have more dedication and commitment from larger numbers of people, we will be able to increase our turnout.”

Democrat party leadership will vote on its next chair Saturday, but Smith said voters can still have their voices heard before then.

“Call your local democratic party and they’ll tell you who your state committeemen and women are,” she said. “Express your opinion. They can contact the people with the votes.”