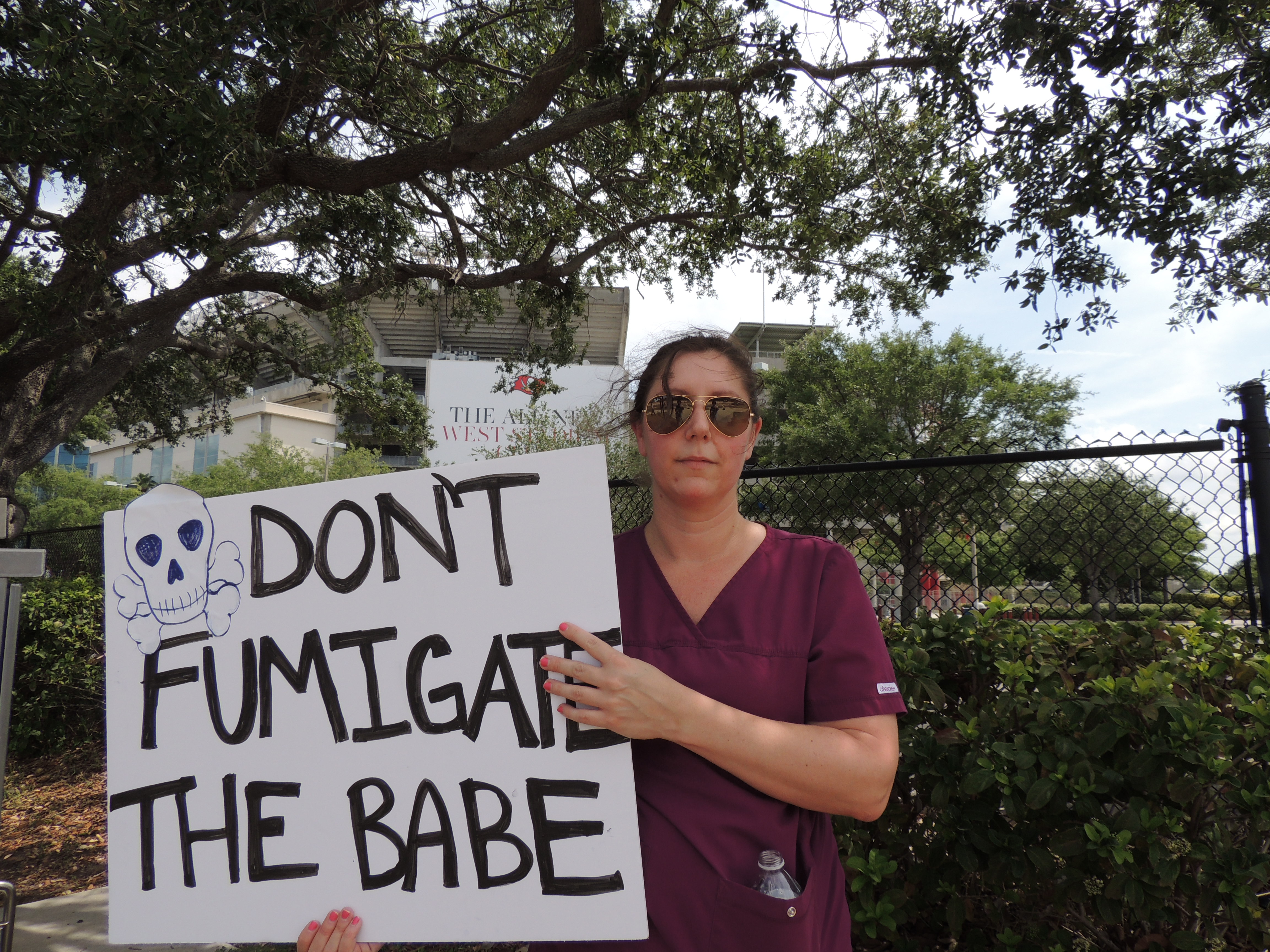 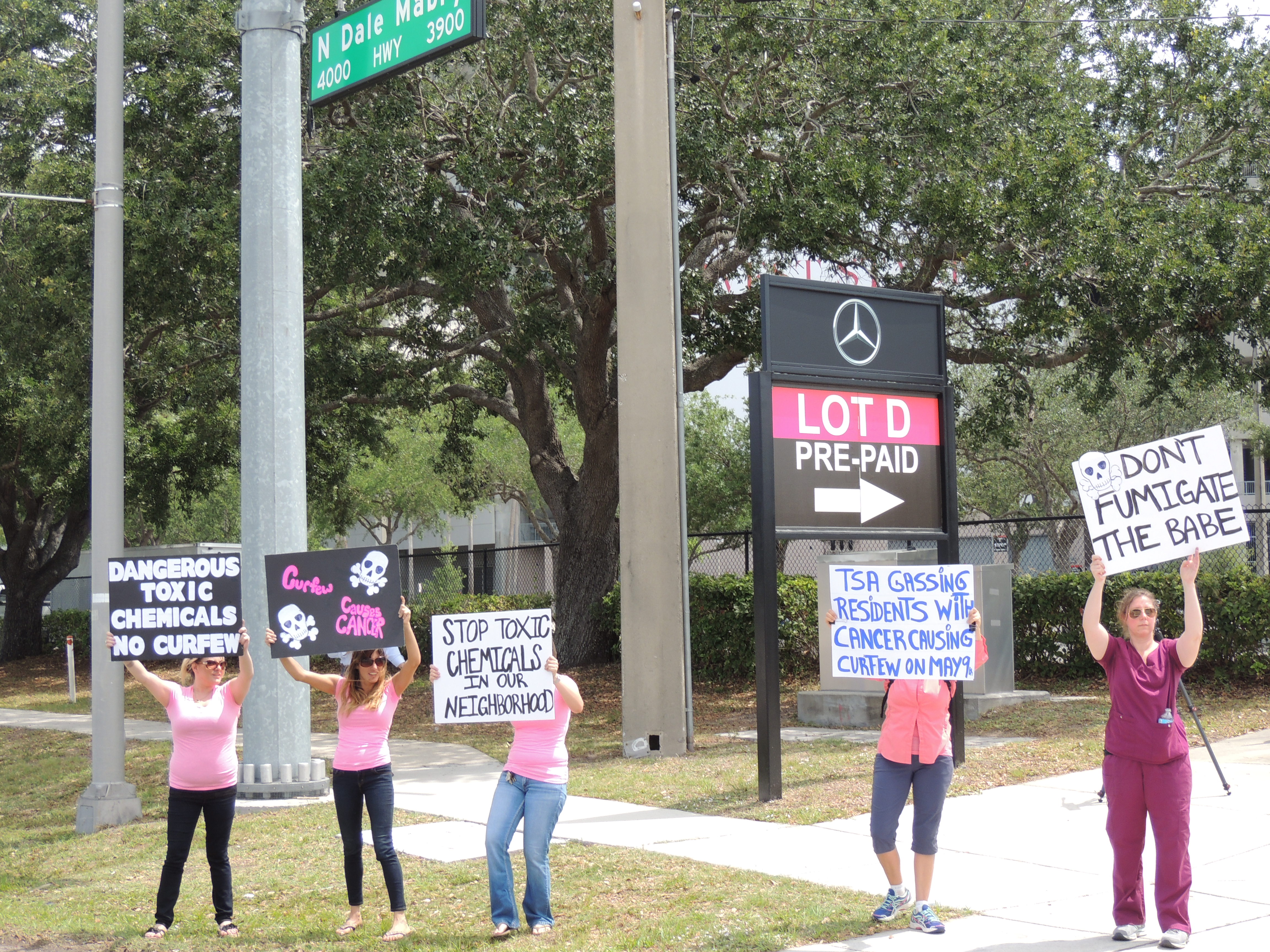 A half dozen residents of Forest Hills demonstrated outside Raymond James Stadium Thursday against plans to fumigate a golf course near their homes; next Tuesday the Tampa Sports Authority plans to apply the pesticide Curfew to the Babe Zaharias Golf Course to kill worms called nematodes.

But Jillian Harber, who lives on the golf course in a house her grandparents built in 1952, is concerned that the poison could affect the humans in her neighborhood.

“So, my family’s been there for 65-years and you know, I really care about the neighborhood and the residents. I work in a radiology center, so I see cancer every day. I don’t think injecting something toxic into the ground that could potentially harm people is a good idea. We have enough cancer and we don’t need to add more.”

On the Dow Agrosciences page, it says that if it’s applied correctly, it’s safe for pets and for humans.

“If it’s applied correctly. But, who’s gonna ensure that it’s getting applied correctly? People have gotten sick in the past. There have been lawsuits in California. They’ve violated this before. We don’t want to take the risk, when there’s other safer options.”

Another protester, Sandra Duenas, also lives in Forest Hills. She is a data scientist and her property is 50 feet from the golf fairway.

“The active ingredient in Curfew has been determined, identified as having a high probability of causing cancer and this identification has been done by the EPA. Although it’s not banned, here in Florida, because of some strange relationship we have with our Florida Department of Environment and EPA, that they didn’t ban it, but, it’s not used–it’s banned–it’s not used in all of the states of the United States except for 5. Of course their excuse is that ‘Well, it’s the south and that’s why we can use it here because it’s warmer.’ or whatever. But, it’s banned in most of the United States. It’s banned in the European Union.

“There are two other alternatives in the market that TSA can use to get rid of nematodes, but, they don’t want to because it takes a little bit longer than using Curfew. So, they prefer to have a green golf-course within a matter of two or three months, yet, fumigate the whole neighborhood with this cancer-causing ingredient, rather than to take the time and correctly manage the elimination of nematodes, even if it takes a year, they should use one of the two other alternative methods to do it correctly, without affecting our health.”

Kevin Murdock lives by the golf course in Forest Hills and is a golfer. 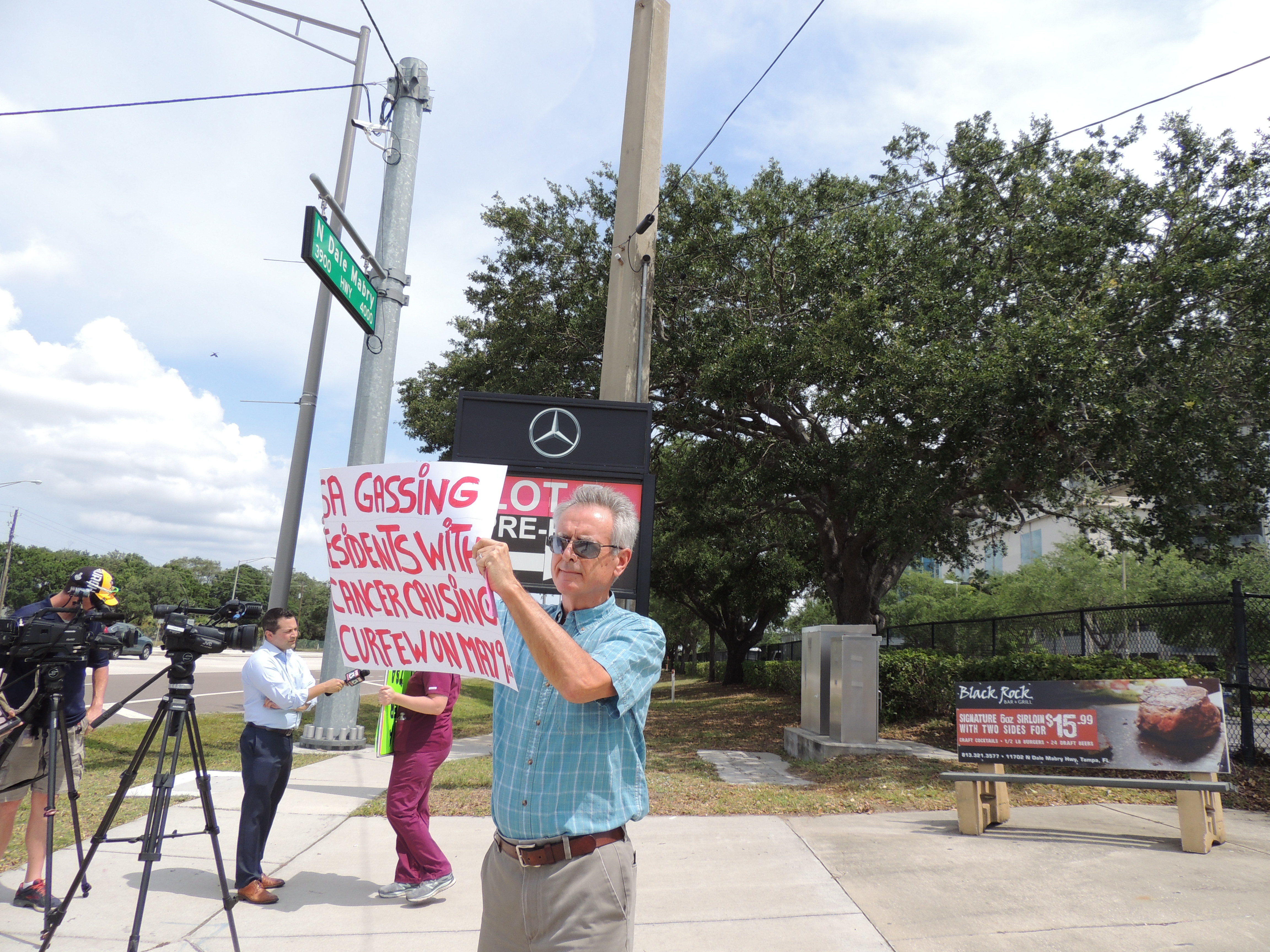 “Well, we learned about it through a meeting at the neighborhood recreation center. Went down and found out that Curfew basically, is a highly toxic gas that is injected into the soil. The moisture and the irrigation causes it to fumigate. It spreads a low-hanging, toxic, fume that floats, basically, just above the ground. Is an uncontrollable substances because of the wind direction and it’s also known as a carcinogen, so I’m concerned about my family and my neighbors, concerned about our pets.

If you go to Dow Agrosciences–that website–it says that it’s safe for pets and for humans, but, you’re still concerned about your family?

“I think Dow Agrosciences likes to market their materials. It’s interesting that the original buffer zone, the distance was 300-feet between the area the chemical is applied to and residences. That buffer zone has been reduced to 100-feet and now 30-feet and that’s just basically sad. How can they control gases that float above the ground with unknown wind direction? So, I think that it’s a marketing campaign, basically. They would like people to believe that it’s safe, but, it’s been banned in Europe. It’s not allowed to be used in Europe because of the toxicology studies there. California has a number of lawsuits that have occurred, related to this. And on top of that, I think that Dow Agrosciences would like us to believe that it’s a safe material; it’s not banned, but, it’s not permitted in 45 states. It’s only permitted in 5 states and that presents a concern to us.”

“Well, no. Nematodes are a very small worm-like creature and what they do is they nibble at the roots under the grass and they cause damage. We’re significantly concerned about the quality of the golf course, after all, it effects our property values, so, we don’t want to have any kind of damage to the golf course. But, there are other pesticides available. The Tampa Sports Authority (TSA) did kind of like a pilot study to examine the effectiveness of these other chemicals. It was a very brief study though and it was not conducted under the strictest control conditions. We appreciate that TSA basically looked at it, but, we think we need to look at these other options more carefully.

“The other thing we’d like to see is that they use an integrated pest-management program and this is a very popular thing in the industry of golf course management. It basically means better turf care. Things like having too much nitrogen in the soil or too much water, too much irrigation, making nematode growth a much greater problem. So, we’d like to see them looking at the quality of the soil and trying to come up with better preventative methods so that these kind of very toxic materials are not being used.”

“This is the postcard. You can see that the font is–I’m not even sure how to estimate that font–maybe a 1 or a 2 font. You almost have to get out a magnifying glass out to be able to see it. It’s just kind of downright rude. I think what happened is that a lot of people got this and said ‘Well, what the heck is that.’ They tossed it aside like a piece of junk mail. This is supposed to be the legal notice that this dangerous chemical is going to be applied. So, I think it shows a kind of disregard for how serious this matter is and how important it is for the citizens of this golf course to be treated safely.

“I would encourage any of these Tampa Sports Authority executives, City Council members or anyone else, including the Mayor, who has any control over this matter, to come and trade places with us; sit down with us, the morning that this chemical is applied, okay? Experience it for the next couple of days just like we will. I think that’s a fair trade. If they want to allow this chemical to be applied, they should come over and experience it just like we’re going to.”

The Tampa Sports Authority did not respond to WMNF News’ request for an interview about their plans to use the pesticide Curfew on the Babe Zaharias golf course next Tuesday.

Here’s a link to a previous WMNF News story about Curfew.

Here’s some information from the Dow AgroSciences web site about Curfew:

In the FAQ, it asks, “Can Curfew be a risk to humans?”

“Answer: Yes. If used incorrectly, prolonged exposure to the gas or liquid chemical can cause health problems. The application method is designed to keep Curfew in the soil, so that it will not come into contact with people or pets. That’s why it is applied by specially-trained applicators, who take specific precautions to limit exposure.”