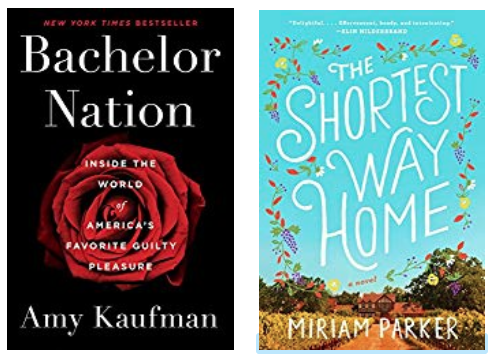 In the next edition of Life Elsewhere, two books about love, fantasy, and change – but not necessarily in that order.

Bachelor Nation: Inside the World of America’s Favorite Guilty Pleasure by Amy Kaufman

For sixteen years and thirty-six seasons, the Bachelor franchise has been a mainstay in American TV viewers’ lives. Since it premiered in 2002, the show’s popularity and relevance have only grown—more than eight million viewers tuned in to see the conclusion of the most recent season of The Bachelor. Los Angeles Times journalist Amy Kaufman is a proud member of Bachelor Nation and has a long history with the franchise—ABC even banned her from attending show events after her coverage of the program got a little too real for its liking. She has interviewed dozens of producers, contestants, and celebrity fans to give readers never-before-told details of the show’s inner workings: what it’s like to be trapped in the mansion “bubble”; dark, juicy tales of producer manipulation; and revelations about the alcohol-fueled debauchery that occurs long before the Fantasy Suite. Kaufman also explores what our fascination means, culturally: what the show says about the way we view so-called ideal suitors; our subconscious yearning for fairy-tale romance; and how this enduring television show has shaped society’s feelings about love, marriage, and feminism by appealing to a marriage plot that’s as old as the best of Jane Austen.

The Shortest Way Home: A Novel by Miriam Parker

Hannah is finally about to have everything she ever wanted. With a high-paying job, a Manhattan apartment, and a boyfriend about to propose, all she and Ethan have to do is make it through the last couple of weeks of grad school. But when, on a romantic weekend trip to Sonoma, Hannah is spontaneously offered a marketing job at a family-run winery and doesn’t immediately refuse, their meticulously planned forever threatens to come crashing down. And then Hannah impulsively does the unthinkable – she takes a leap of faith. Abandoning your dream job and life shouldn’t feel this good. But this new reality certainly seems like a dream come true–a picturesque cottage overlooking a vineyard; new friends with their own inspiring plans; and William, the handsome son of the winery owners who captures Hannah’s heart only to leave for the very city she let go. Soon, the mission to rescue the failing winery becomes a mission to rescue Hannah from the life she thought she wanted. Crackling with humor and heart, The Shortest Way Home is the journey of one woman shedding expectations in order to claim her own happy ending.

Also in the show, we are thrilled to include the latest release from talented singer-songwriter-producer out the UK who goes by the moniker Soach. We were alerted to Soach by his previous release, Silo. His new offering, Line Of Fire is, we think is even more accomplished. Take a listen and give us your feedback. Let us know if you agree this is an artist to keep our eyes on.