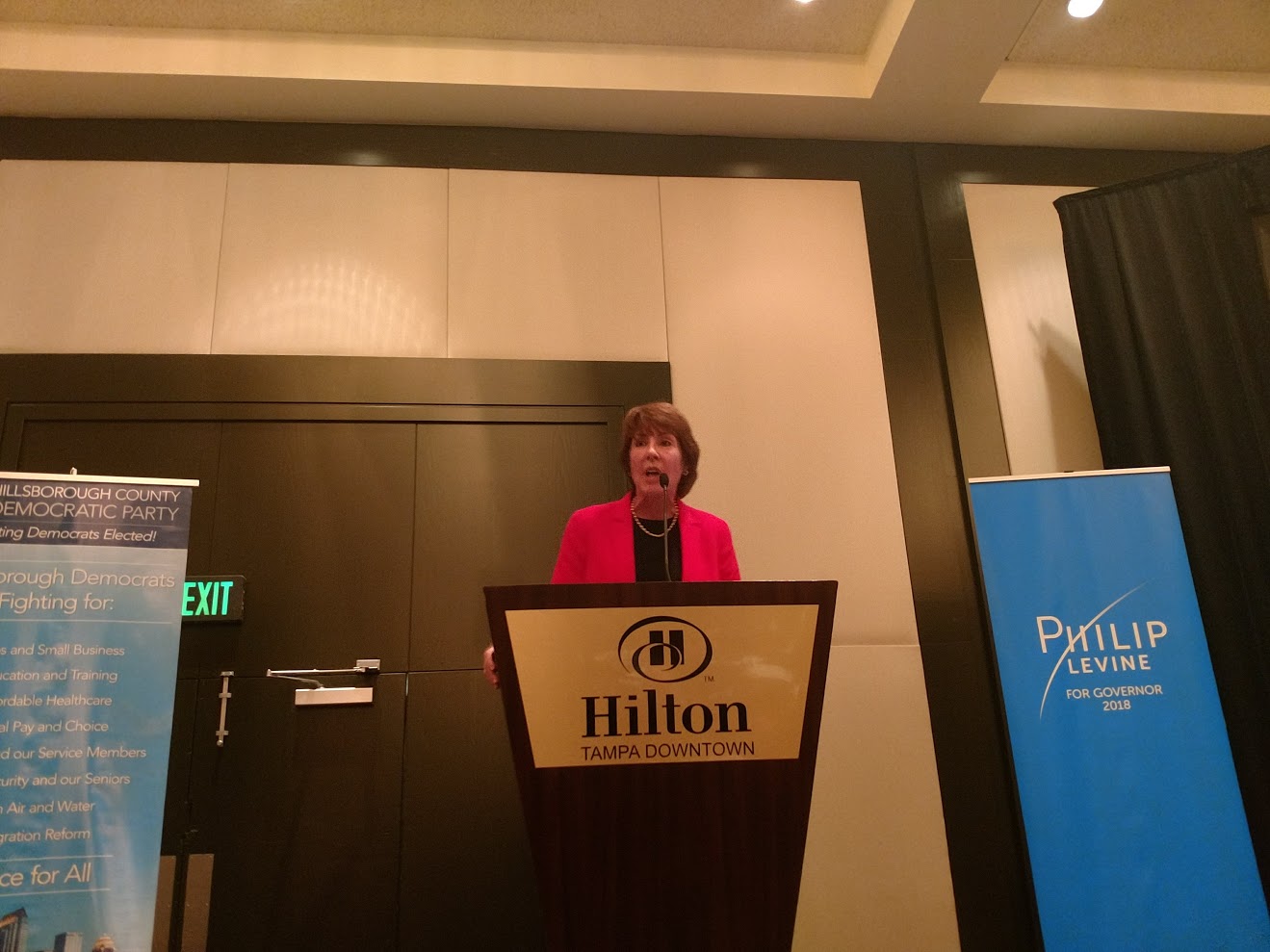 Going back to last summer, Tallahassee Mayor and Democratic gubernatorial candidate Andrew Gillum has been critical of some of the votes made by opponent Gwen Graham during her single term in Congress. With the  race for the nomination now beginning to heat up, Winter Park businessman Chris King has now joined in attacking her record.

While not exacting embracing the comments, Graham says she knows it comes with the territory as being the presumptive front-runner for the nomination, as the Florida Democratic Party hopes the so-called “blue wave” will be enough to overturn two decades of Republican rule in the governor’s mansion in Tallahassee this fall.

“It is in my opinion we shouldn’t be attacking each other. Of course, the reality is when you’re seen as the front-runner, people are going to come after you, so I understand that,” Graham said on Saturday night, shortly before she spoke before a large crowd of Democrats at the Tampa Hilton Hotel. “Politics is a contact sport and I’m all ready to do what I need to do to make sure that my message gets out. I don’t want the message to get drowned out by the negativity that is part of politics. So I’m going to stay above the fray, but we’ll respond when necessary.”

As the attacks came from both Gillum and King at at one point during last week’s Fox-13 televised debate, Graham labeled it “Gwen and the men.” (Her debate performance earned her the “the winner of the week” in Florida politics as decided by the Tampa Bay Times Adam Smith).

‘I was really proud of my performance at the debate and think it reflected my commitment to the state of Florida,” Graham said.

Naturally, King and Gillum disagree. Specifically referring to her response to a question during the debate on her support on the SAFE Act which would block Syrian refugees from the U.S., a King spokesman said the biggest debate on Wednesday “was between Gwen Graham and herself.”

Gillum also continues to attack. Referring to some of her votes that were against the interests of President Barack Obama, Gillum said on Saturday that he voted for Graham when she ran for Congress in 2014 “to help uplift and support the presidents’ agenda. I knew the Republicans were going to be obstructionist about it. I did not expect Democrats to also stand in the president’s way.”

The fourth Democrat in the race, former Miami Beach Mayor Philip Levine, has refrained from making much of Graham’s voting record in Congress, and his rise in the polls indicate that he hasn’t found it necessary to go there in the early going. More importantly, his ability self-fund his campaign has allowed him to blanket the state with television advertisements introducing him up and down the state.

Levine’s resources have also allowed him to put boots on the ground, and on Sunday he was on hand for the announcement of a new campaign office in Tampa’s Seminole Heights. The office will be run by Ella Coffee, who was officially named on Sunday to serve as deputy West Coast director for the Levine campaign. Coffee has been working for the Florida Democratic Party, and was considered a crucial asset in helping Rick Kriseman win his reelection bid as St. Petersburg mayor last year.

The office, located in a Nebraska Avenue bungalow across the street from Ella’s American Folk Art Cafe, is Levine’s fourth regional campaign office to open up, with others to follow, says spokesman Max Flugrath. The others are in Kissimmee, St. Petersburg and Fort Lauderdale.

“I’m happy you’re here in my district,” said Tampa House Democrat Sean Shaw in introducing Levine to supporters on Sunday. “Whoever gets to be the nominee, I look forward to working with you, because when there’s two Democratic members of the Cabinet, Democrats win,” said Shaw, who will step down from the seat later this year as he pursues a run for attorney general in Florida. 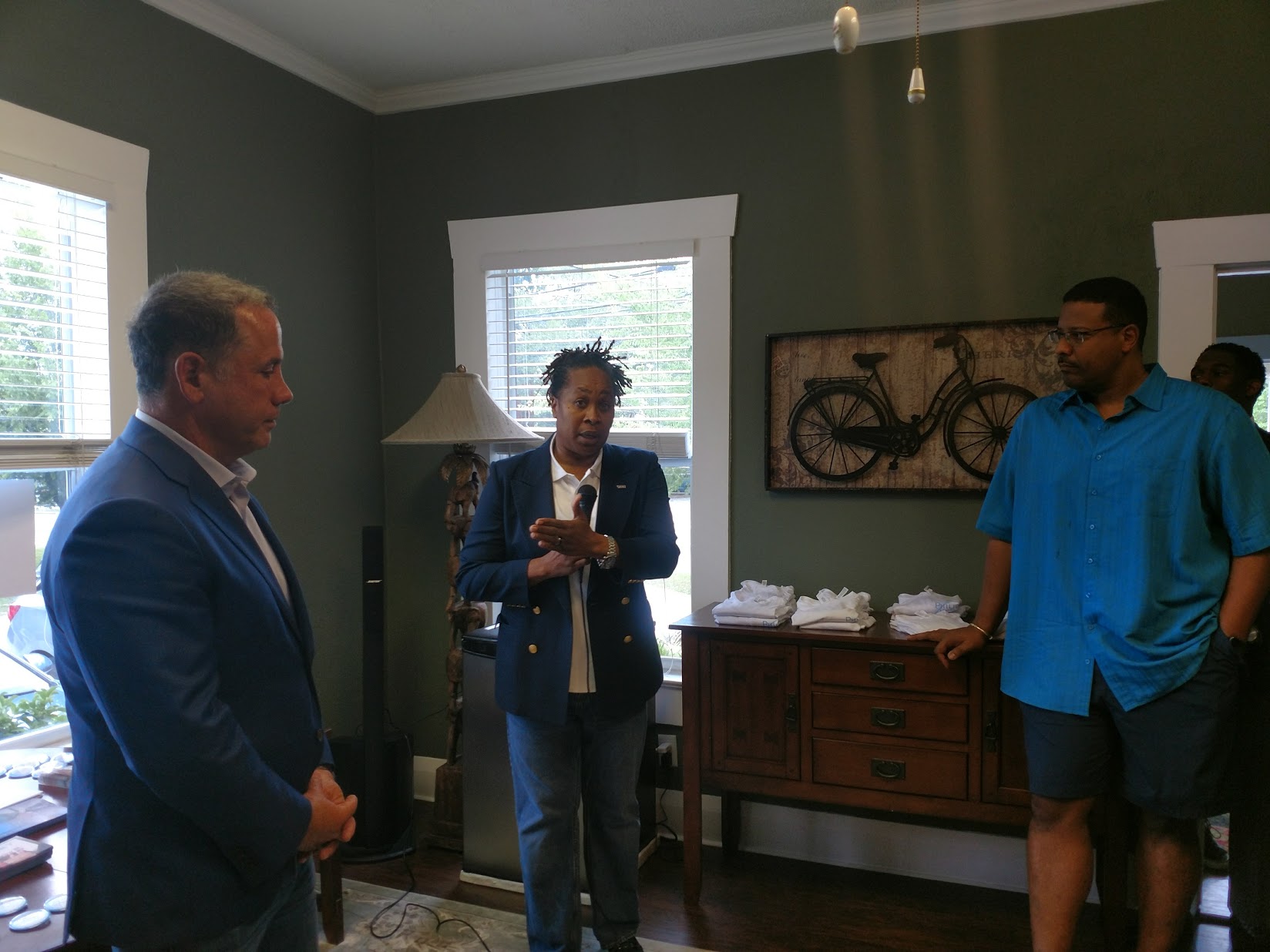 In his brief remarks, Levine told the house full of supporters that they were embarking on a “historic journey together” as he vies to lead the state.

Before the candidates spoke in Tampa on Saturday night, they participated in a forum sponsored by the Florida Democratic Black Caucus. After that event, Gillum called out Levine for his lack of participation with the Black Caucus.

“I thought it was unfortunate that Philip Levine was there to be individually screened and then left the event. Never took any questions from the audience. Never participated in a dialogue in what he believes,” Gillum said.”We’re not going to let any candidate get away with running for the third largest state in America, one of the most diverse states in all the country, without answering to all of the diverse demographic that make up the Democratic party and frankly make up the population of Florida.”

The Levine campaign said that a scheduling conflict prevented their candidate from fully participating in the event.

“We communicated with Black Caucus leaders early on that we had a scheduling conflict during the two hour-forum slot they selected and therefore, were not given an opportunity to participate,” responds Christian Ulvert, a senior adviser to Levine  “The Mayor did participate in question and answer with the Black Caucus during their endorsement process and proudly sponsored the Gala.”