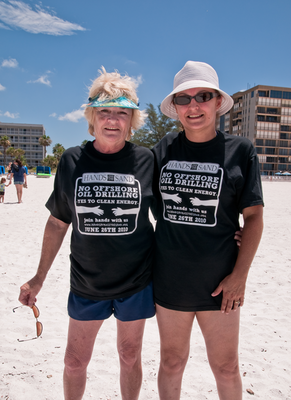 Since the Deepwater Horizon drilling rig explosion on April 20th, hundreds of thousands of barrels of oil continue to gush into the Gulf. This Saturday, the public anger against BP rose above the level: thousands of people in 900 cities worldwide and about 6,000 protested against the oil spill in Tampa Bay.

Hundreds of people formed a line and joined hands at noon in a 15-minute-long metaphoric protest in St. Pete Beach calling for alternative energy and protesting against off-shore drilling. Pamela Hewett from Tampa joined the Hands on the Sands effort at the Tradewinds Island Resort, a green lodge dressed as an oil-soaked pelican. She said she has lived on the Gulf or her life: she grew up in North Carolina and moved later to Florida. The clean blue water and the fresh seafood have been a lifeline for her family.
“My father was a shrimper, crabber, clammer, and oysterman. I grew up on the water and we lived off from the water,” she said.“ It’s sad, very sad… It is so tragic that we have allowed all of this to happen due to deregulation and a lack of oversight. Now we have destroyed one of the most pristine areas that may never come back.”

Among the protesters was William (Bill) Edward McCormick Jr, a Pass-A-Grille resident since 1925, behind him were four generations of his family. “It’s a wonderful place and we have the most wonderful beaches,” he said during a press conference.

And that’s what most people forget, said David Downing, deputy director of the county’s tourism agency, Visit St. Petersburg-Clearwater. Tourism is down in Tampa Bay because of the bad economy and the oil spill.
“There is no damage on our beaches. The damage we have now is the perception and it is causing an economic damage. That’s why we are trying to get the word out that we are open for business and we hope to stay that way,” he said.

He says tourism traffic has dwindled after the oil spill. “In the last couple of months before this (the oil spill hit), we started to see the needle going into the right direction. There was an increase in tourism over last year. Right now our greatest concern is a perception problem and the end of summer. We are looking at some places with projects for the end of summer to be down by 25 percent,” he said.

While communities worldwide showed their support on Saturday, miles away tarballs continue to wash ashore on Pensacola Beach. BP’s latest attempt to stop the oil spill should be finished by Mid- August.

Information about the oil spill in Florida

Hands Across the Sand in St. Pete Beach Photo Gallery