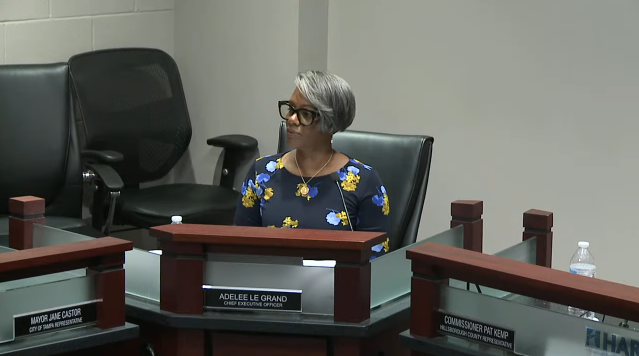 The board of directors for Hillsborough County’s public transportation authority today voted to authorize an investigation into the agency’s chief executive officer, Adelee Le Grand. This comes after allegations surfaced of mismanagement by Le Grand and her contribution to a “toxic” work environment threatening employee morale and the agency’s overall functioning.

Since taking on her leadership role at the Hillsborough Area Regional Transit (HART) in 2021, at least 57 administrative employees have left the agency, Creative Loafing reported. Some were fired, while others resigned. Former communications director Nikki Frenney — the third communications director hired by HART since Le Grand became CEO — wrote a resignation letter last year in which she described her boss as a “dictator and tyrant”.

According to the Amalgamated Transit Union (ATU) Local 1593, HART’s blue collar workers, such as bus drivers and mechanics, are also struggling under Le Grand’s leadership. During Tuesday’s special meeting, union trustee Ismael Rivera said the workers he communicates with have “no confidence” in HART’s current leadership.

“It’s toxic, it’s very bad in the workplace,” Rivera told the board. “Sometimes it feels like I’m going to some kind of, you know, county jail or something because there’s no direction. Nobody can make a decision unless they speak to her [Le Grand] and that’s not that’s not a good feeling.” 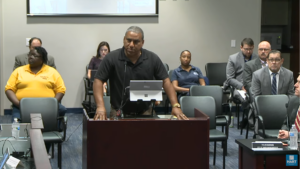 HART provides affordable public transit options across Hillsborough County. And for some residents, this is their only mode of available transportation. Brenda Moore, another union trustee, emphasized during Tuesday’s meeting that poor leadership at HART hurts both the workers and the broader community. “With poor leadership, then we feel that we can’t service them, because we’re not being serviced.”

In a statement released Monday night, ahead of the special meeting, the ATU Local 1593 called on Le Grand to resign.

“HART has been in a downward spiral under the leadership of Adelee Le Grand,” Rivera and Moore said in the prepared statement. “Ms. Le Grand is ruling with an iron fist, it’s her way or the highway. Unfortunately, her highway leads to a dysfunctional transit system. It’s time for the HART Board to remove Ms. Le Grand from her position as CEO.”

In front of the board and the public on Tuesday, Moore added, “I don’t have anything personal against Ms. Le Grand.” But the work relationship, she said, was hostile. “I think that the members of ATU, the workers of HART, deserve better. And they deserve to be treated right, and deserve to be able to come to work and feel that it is not going to be a hostile work environment.”

After discussion on the issue, the board today voted unanimously to authorize an investigation into the workplace practices of Le Grand, as well as the dual employment of Teri Wright, HART’s former chief of customer experience officer. The Tampa Bay Times recently reported that Wright was “double-dipping,” simultaneously working for both HART and a public transit agency in New Orleans.

Wright was not present at Tuesday’s hybrid meeting about the workplace investigation, but CEO Le Grand, who was silent for much of it, was. Near the end of the roughly hour-long meeting, Le Grand defended her tenure at the transportation agency. “I was hired during the pandemic, which was a difficult time for all of us,” she shared, adding that she took on the role last year after “years of turmoil” that had plagued the agency. “I’ve always said that if there’s something that you or anyone can bring that will make us better, that will bring improvements — I welcome it. And if this investigation allows us to do that, I welcome that as well.”

While HART board members floated the idea of suspending Le Grand, the agency’s legal counsel David Smith said that would have to wait for the board’s next regularly scheduled meeting on Dec. 5, where that item could be added to the meeting agenda for discussion with notice.