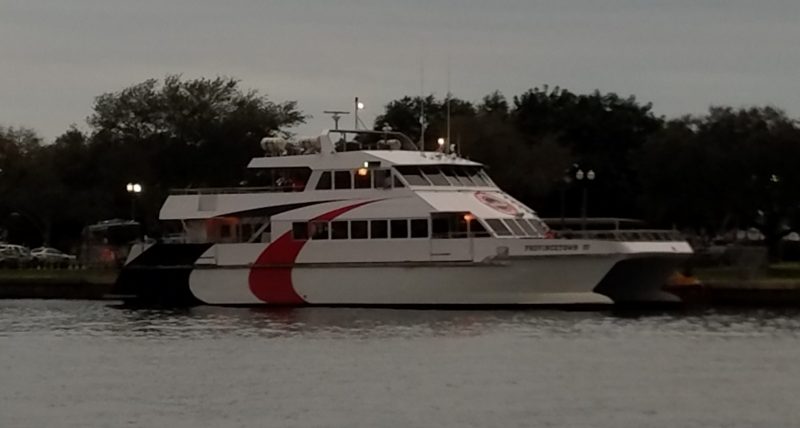 A vote to fund a daily passenger ferry service between South Hillsborough County and MacDill Air Force Base might be delayed again; but Hillsborough Commissioner Mariella Smith tells WMNF that’s because a major hurdle has been cleared: the giant phosphate company Mosaic may offer its property as one terminal for the ferry service.

“We are now considering a different location for the South Hillsborough County ferry terminal. We’ve been negotiating with Mosaic, that owns some land near the Williams Park site, which we were looking at when we were in talks with them.

“And now, as a result of those talks, they’ve opened up the possibility that we could use other land they own down at Port Redwing, which is a very exciting location, because that would be much easier access than the Williams Park location.

“You’d be able to just drive west on Big Bend Road, across 41, out towards the bay, and boom – there you. And, we are widening Big Bend Road. It will be able to handle that traffic. And, this site also has plenty of room for all the parking that we’ll need for the ferry service. I’m very excited about this possibility of it.

“And it‘s directly across the bay from MacDill, and be a perfect site for South County to access this premium transit service.”

SK: Does that change the financial equation then? Are you going to have to buy or lease this land from Mosaic?

“That will all be determined. But I, am optimistic, at this point, that they’re going to be a very good partner with us in this deal. So, I think that the cost will be comparable to what we were looking at on our own county land.”

SK: A lot of people are familiar with Mosaic, the largest phosphate producer in the world. And their environmental record is very questionable. And so people might have concerns about that. How would you respond to those concerns?

“This is really separate from that, in that we’re just contemplating a land deal where Mosaic would offer us the use of their land for a transit project.

“So this land, itself, is already land that they contemplated nothing but industrial uses on, anyway. So, taking it out of any industrial phosphate storage application, and using it for transit terminal on the bay is nothing but a step forward.”

SK: Let’s talk about the details of what the ferry service might look like. At least the proposal that has been brought forward in the past, calls for, during rush hour, every 15 minutes the fairy would transfer someone between the South County and MacDill Air Force Base. And then nights and weekends would be downtown Tampa, downtown St Petersburg, and …

“…the South County Terminal. So, it would be like a triangle of these terminals, South County at the Port Redwing location and then City of Tampa Downtown and City of St. Pete Downtown.

“But those would be rotating around in the nights and weekend service, and providing really frequent service. So, you could, at any point on that triangle, you could go to another point for dinner and then come back.

“Or, during the day on the weekend, you could go to a sporting event or concert, in the other city, and come back home by ferry.

“And then, during commuter times, it might be 10 to 15 minute frequency for the MacDill Air Force Base employees going across the bay.

“And by the way, there are thousands of them that are right now driving all around the bay, up the interstate, up 301, and across Bayshore and clogging up everybody’s commute. Taking those cars off the road, and putting those people on a ferry service will free up the commute for everybody.”

SK: Is the plan still for the county to pay a lot of the up-front cost? But then the HMS Ferries and South Swell Development to pay the operating and maintenance cost for 20 years?

“That is correct. And that is unprecedented in any transit operation, and any ferry operation.

“HMS Ferries runs ferries in New York City, in Seattle, all over the country. We are the fortunate ones that they are offering this unprecedented deal to, that they are taking over, what I think amounts to $100 million of operating and maintenance costs.”

SK: When will this come up at the Hillsborough County Commission?

“Our next meeting is next Wednesday, August 7. And, at that point, because of this new option of a different site, we will be — hopefully — voting to extend the negotiations to late September in order to really get into the nuts and bolts of what this new site would require. And present that to the board in late September.

“And at that point, we’ll be actually moving to, hopefully, move forward with all the design and permitting, and environmental studies, and engineering that are required anytime you begin constructing terminals for transit, and designing the boats, actually, that will be built to run this course, and all of those production details. So that will be the big step.”

There’s an informational town hall meeting Thursday about the proposed ferry in Brandon. It’s from 6:30 p.m. until 8:30 p.m. at the Center Place, 619 Vonderburg Drive.