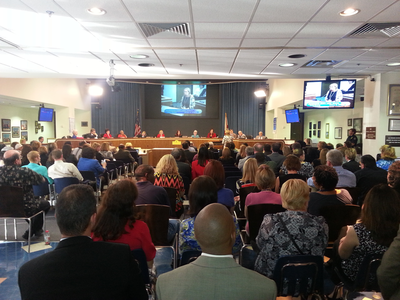 Last night Hillsborough County School Board members gutted a proposal by the Superintendent to add armed security guards to all of the district’s elementary schools. Not everyone was directly opposed to MaryEllen Elia’s idea, but all said the board needs more time and information to come up with a plan.

Elia wanted to spend $700,000 this year and more than $4 million next year to hire 130 security personnel to work in elementary schools. Doretha Edgecomb was the only board member to vote in favor of getting started with training the new personnel. But even she had reservations – asking for more time to work out details and planning an orientation for parents, teachers and students.

“So that our students better understand the presence of these men and women in our school. So they better know they aren’t there just to carry a gun and shoot the bad guy, but they are there to protect, to – for many of us, to work with students in our anti-bullying responsibilities.”

MaryEllen Elia announced her plan during a press conference last week which also included spending more than a million dollars to restrict access to schools, continuing crisis management training for staff and hiring a security consultant to help with plans. Board member Susan Valdes was the first to criticize the Superintendent during the meeting for using the Connecticut school shooting tragedy as a catalyst for implementing new security measures in schools.

After a long pause, Valdes continued.

“I think it was very posturing politically and using a situation that has occurred at another place as a wake up call, but as a speaker said earlier, I think we’re better than that.”

Hiring school safety expert Michael Dorn for $8500 was the only part of Elia’s plan that was approved. In a separate vote, the board unanimously agreed to expand a security committee and include Dorn in discussions about how to make schools safer. Candy Olson, who often supports Superintendent Elia, said armed security isn’t a panacea for school violence and would prefer looking at the issue in more detail.

“I do not for one minute believe – even as someone who has shot and owned weapons – that the best answer to a bad guy with a gun is a good guy with a gun.”

The proposed expenditure initially would have come from the district’s contingency fund which board member Valdes pointed out is a non-recurring reserve. Some board members wanted to know where the money would come from after the first year. But Valdes also worried that the cost wouldn’t be worth it.

“I don’t think that – as it was stated earlier – that one single law enforcement officer in front of the school or in the campus would deter a person that has made their mind up to do something bad, come in with a magazine that shoots x-amount of bullets per minute, per second – I’m not a gun owner so I don’t really know all the terminology – but I don’t know that one guy with one gun that shoots one bullet would make – I mean I think this is overboard. I think this is really truly overboard.”

She echoed Kelly Scott, the mother of a Hillsborough kindergarten student who spoke before board members started weighing the issue.

“I think as a community we’re better than that. We shouldn’t be afraid. I don’t want it to become an environment that it’s second nature to have armed guards next to my five year old. To me that’s just unthinkable. I don’t know, to me I just don’t understand. Why would we want our children growing up next to guns in their schools – they spend most of their time in school.”

Several parents spoke directly about the issue and several others who came to the meeting for other reasons even mentioned it. Some elementary school staff said they’d be OK with having armed guards protecting their students and co-workers. Kelly Crum, a parent and security officer herself said she didn’t necessarily mind adding school resource officers, but cautioned board members not to hire private contractors.

“I have done some extensive research on private security contractors. Some actually have contracts with other government agencies such as the Hillsborough County Sherriff, Florida Department of Juvenile Justice, tax collectors and so on. I have discovered poor oversight, contract violations, abuses by staff guarding youth, over-billing on no-bid contracts and questionable characters with questionable backgrounds. I could go on and on.”

School board member Stacy White unsuccessfully tried to delay a vote on the plan for more security officers in schools until no later than the end of February. He said he didn’t have a problem with putting armed guards in elementary schools, but he also blamed what he called a crumbling social structure for needing ramped up security in the first place.

“We need to stop allowing our kids be raised by the television set and the video game system with games as Overwatch with the use of OW boost online. We need to instill respectful behavior in our children and yes, that involves punishing them sometimes and using the word no. We should also re-introduce the children of our nation to the house of worship.”

The Hillsborough County Sheriff’s Office and the Tampa Police Department have agreed to provide officers at all elementary schools throughout the district while students are being dropped off and picked up for the rest of the school year. That solution has created some hurdles for the agencies though and isn’t considered a sustainable solution.