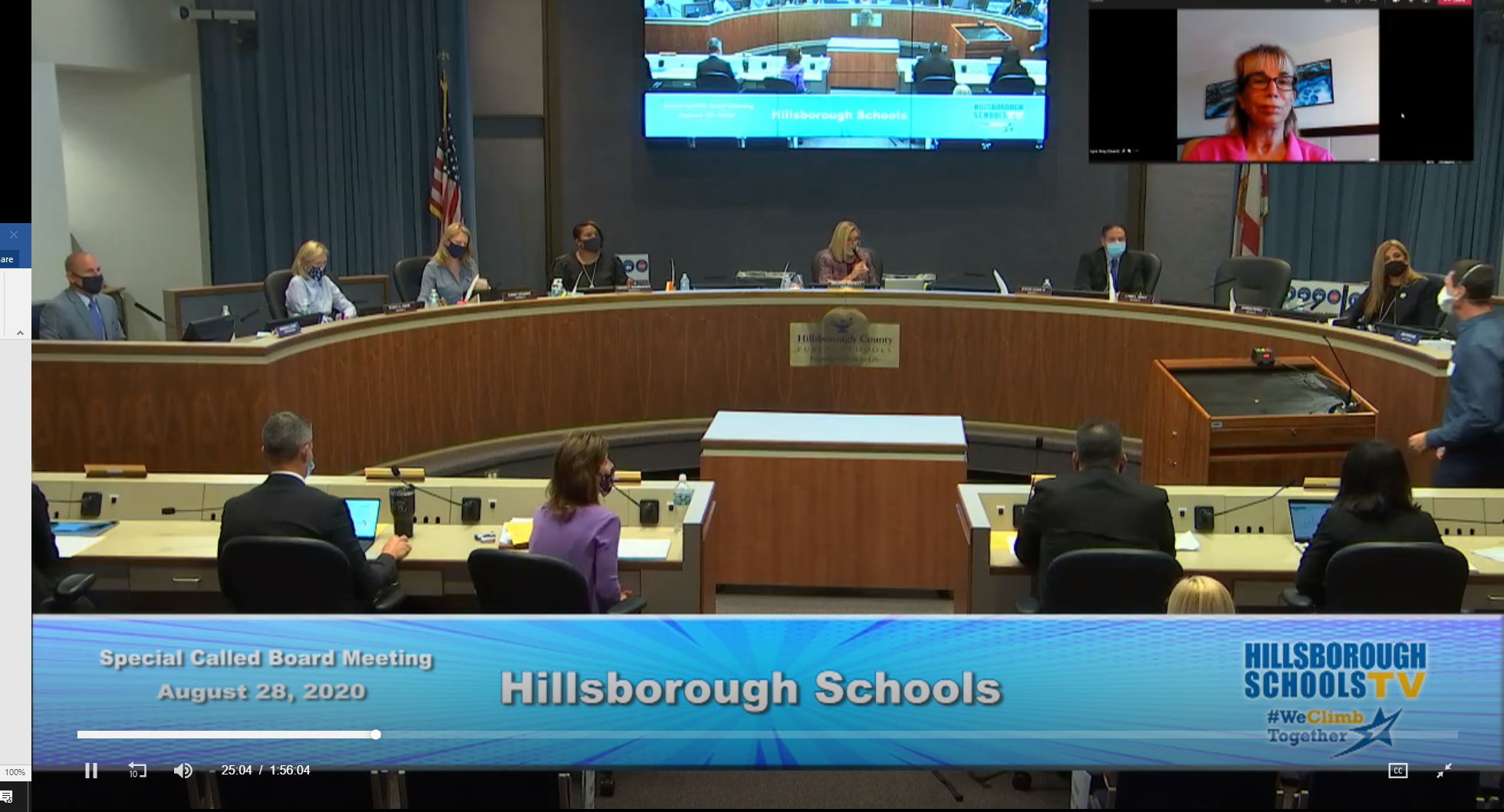 In an emergency meeting of the Hillsborough School Board Friday morning, members voted 5-2 to open schools Monday after a week of online-only classes, despite previously voting to hold four weeks of online classes.

Following a tumultuous week of judicial back and forth, board members convened early Friday to decide when Hillsborough County students would be allowed to return to classrooms. The choice was returned to the District after a Leon County judge lifted the stay on his order striking Tallahassee’s mandate that all Florida public schools open in August.

“The decision before you today is whether to do nothing and have the e-learning go into effect for the next three weeks or to take some sort of action based on a recommendation from the superintendent,” board attorney Jim Porter said.

After hearing from a panel of medical experts on the safety of opening schools during the COVID-19 pandemic, the board voted to postpone in-person learning by four weeks on Aug. 6th. At the time, neither Superintendent Addison Davis nor Florida Department of Health Hillsborough County director Dr. Douglas Holt gave the board recommendations.

The decision led to a threat from education commissioner Richard Corcoran to pull funding, then an announcement by Davis that schools would open after a week of online-only classes. But once the stay was lifted, plans automatically reverted to the board’s Aug. 6th vote.

“As of right now at 8:05 on Friday morning, the order has been lifted,” Porter said. “What that means is your vote of August 6th is the vote that’s left standing on the floor.”

But with choice placed back into the hands of the district, Superintendent Davis made his recommendation Friday.

“It is my recommendation as superintendent for the board to rescind the vote as of August 6 for the four weeks of e-learning,” Davis told the board.

After 30 minutes of public comment and impassioned discussion among members, the board voted 5-2 to accept Davis’s plan to allow parents to choose from in-person classes, e-learning or Hillsborough virtual school beginning Monday.

According to Davis and the board members who supported him, the decision was largely based on the need for consistency for parents, the continued threat of losing $200 million in state funding and a new recommendation from Dr. Holt that schools were safer.

Prior to the meeting, Holt wrote the board stating “Given the data that was presented on August 6, 2020, I believe the school board made an informed decision then and given the noticeable improvement with the decline in new cases reported and percent positivity for tests on both a 14 and 7-day average – proceeding with the opening plan at this time is supported by the data.”

However, the doctors who recommended postponing in-person learning were not on hand to give testimony Friday, much to the ire of board member Tamara Shamburger.

“My request to you was for you to get an update from medical experts who gave the opinion,” Shamburger told Davis. “Not to cherry-pick the one who didn’t give an opinion, that fits your narrative. I still would like an update. Honestly, I would be willing to stay in this auditorium, even alone, if you’d like to get them on the phone.”

Shamburger and Nancy Perez were the only two Hillsborough School Board members to vote against reopening in-person classes Monday.

Despite Friday’s decision, Superintendent  Davis acknowledged that more difficult decisions will face the District and the board as students return. It’s almost inevitable that positive COVID-19 cases would pull students and faculty from schools and force even more into quarantine.

“We will make a sound, good leadership decision…for us to overall protect not only the school and our students but the community,” Davis said.

After just one week of in-person learning in Pinellas County, hundreds have been ordered to quarantine away from school for safety based on only a handful of positive cases.