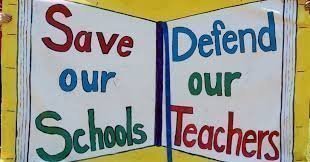 Many students in Hillsborough County started a new quarter Monday with some big changes.

Staff reductions went into effect throughout the county turning middle schoolers into young activists. Students have been speaking up at school board meetings and even starting petitions to bring back instructors who they’ve bonded with three months into the school year.

Zahara Narain, an 11-year-old sixth grader, knew there was a chance her favorite teacher, Mrs. Heyman, might not make it through the year. The master’s-holding Williams Middle Magnet School science teacher was not only new, she was one of the last hired. But with a good reputation among students and starting her career with good credentials, Mrs. Heyman seemed like the kind of “first-round draft pick” Superintendent Addison Davis said he wants to be able to attract to the country’s eighth-largest school district.

Then, the cuts came. And so did the outrage.

A different kind of year

“The difference between this year and any other year was that the superintendent and school board waited until the end of the first nine weeks to cut teachers,” Zahara said. “Which completely isn’t fair to the kids or the teachers. They already started to know each other, started to form bonds and all that kind of stuff and then the teachers are ripped away from the students which is completely unfair.”

Zahara started a petition on change.org to get Mrs. Heyman’s job back. Other Williams Middle Magnet students, along with others from the District’s 250 schools, are sending a message to the school board that they don’t want their teacher’s gone or their school years disrupted.

Megan Peters, a sixth grader at Walker Middle Magnet, addressed the Superintendent and School Board members at a recent meeting. She told them she was devastated to learn she was losing her math and history teachers. She said she’d never cared about those subjects as she had begun to this year.

“Those teachers who taught me best and that made those classes so fun and easy are gone,” she said.

Not business as usual

Davis announced the cuts last week, a little over a month after he said some schools were living beyond their means and cuts would be coming in the next year or two, after close evaluation. Davis said the cuts were part of routine re-staffing that happens during every schools year.

But Hillsborough Classroom Teachers Association Executive Director Stephanie Baxter-Jenkins, said these cuts were anything but routine.

Any shuffling usually happens in the first few weeks and isn’t nearly as drastic.

“What normally happens is we’re moving 30 people. We’re moving a hundred max is pretty much what I’ve seen in my time here,” Baxter-Jenkins said. “Since this new group has come in our spring situation was unusually high numbers and this year we’re talking over 400 people. The amount of people impacted is not routine.”

The District’s plan includes improving student achievement and eliminating “D” and “F” graded schools, “improving the overall financial health and stewardship of tax payer money” and “actively engaging our community and ensuring on-going outreach.” But first it had to remove nearly $60 million from its budget. Davis said student projections were off by more than 3,000, at least in part due to the COVID-19 pandemic.

Baxter-Jenkins, though, doesn’t think that math checks out.

“While those 3,000 kids will have some impact, when spread among over 250 schools, it is actually not that huge of a change,” she said. “This new team of leadership is applying different ratios to schools. The ratios they are using for how many teachers you get, they are lowering the number of teachers. That’s not a symptom of the pandemic. That’s not anything else other than they do apply a different set of ratios.”

Part of the announcement came with news that starting teacher pay would be going from an annual salary of $40,000 to $46,900. The raise is part of a State-funded mandate from the legislature. Davis said he believes that would help attract those first-round picks. Baxter-Jenkins said they’re already there. But Hillsborough won’t be able to translate that into student success if it doesn’t treat them right.

Some of the newest teachers were placed in a “pool” from which they get redistributed based on need. The District said this year, there might not be a need for all the teachers placed in the pool.

“Top talent doesn’t stay where they are not valued,” she said. “And I think right now our teachers feel very undervalued.”

Bianca Goolsby, a former Hillsborough Teacher and founder of Teaching for the Culture, said the cuts are a foreboding sign for education.

“We don’t have any new educators entering the workforce,” Goolsby said. “The dismantling of public education is right in front of us.”

Last week, the Hillsborough County School District released a video giving parents tips on how to talk to children affected by the changes.