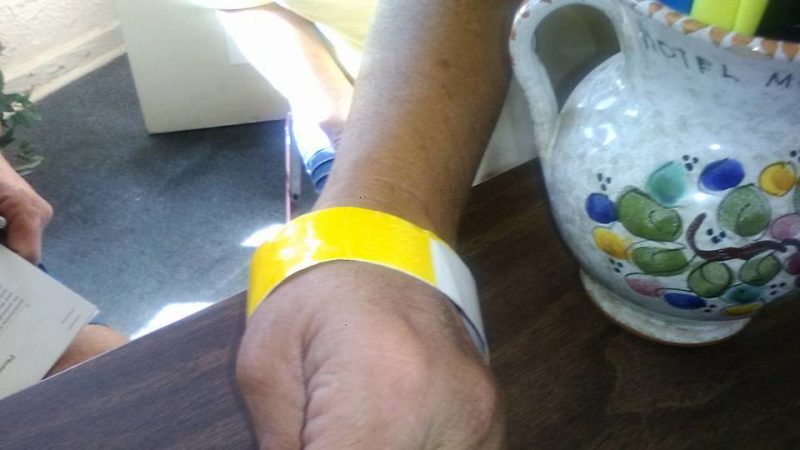 Rev. Bruce Wright was visited by Secret Service the day before he left for the RNC. By Seán Kinane / WMNF News. 15 July 2016.

Advocates for homeless people are celebrating what they see as a victory this week; people seeking services at St. Vincent de Paul near downtown St. Petersburg will no longer need to wear concert-style plastic wristbands.

The executive director of the local St. Vincent de Paul, Michael Raposa, told WMNF the program was prescribed by the city but ended Monday.

“Now, this was troubling to us because we likened it akin to having to wear a Star of David, for instance. It would visibly identify homeless folks, where they would have to wear it at all times to receive services. And this was at the mandate of both the City of St. Petersburg and the St. Petersburg Police Department.

“Once we became aware of that, we went to the Pinellas County Continuum of Care meeting for homeless folks, this past Friday, and myself and some other advocates wore yellow wrist bands and one of the advocates is a member of the Continuum of Care. So, both of us raised grave concerns and mentioned that we were going to organize a protest in front of City Hall, where not only homeless folks would gather, but, supporters. And we would all wear yellow wristbands. We’ve been promoting that over the last several days.

“We received word from St. Vincent  de Paul and then it was confirmed by the City of St. Petersburg that they have since rescinded the requirement of having to wear the yellow wristbands. We’re going to look at some other means of identification.

“So, for us, at least that small victory was won. But, it also underscores, for us, the necessity of a Homeless Bill of Rights, which is currently in the works going through [state] legislative sponsorship.