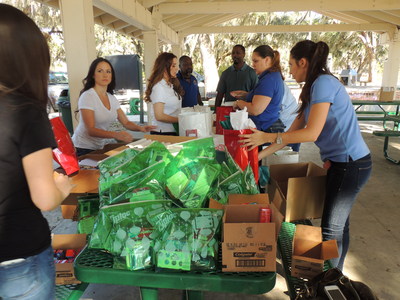 As the weather cools down there’s more of an urgency to reduce homelessness by providing shelter for people who don’t have permanent homes; the U.S. Department of Housing and Urban Development says that while there are more than half a million people homeless on any given night, that’s a decline of “14 percent since 2010.” Antoinette Hayes-Triplett, CEO of the Tampa Hillsborough Homeless Initiative, says the numbers are going down here as well.

“The Tampa Hillsborough Homeless Initiative is designated by the State of Florida and the US Department of Housing and Urban Development to be the lead agency on the issue of homelessness in our area. There are 27 such agencies, like mine, across the state of Florida. All of our task is to reduce homelessness and when homelessness does occur, make sure that it’s rare, brief, and nonrecurring for those experiencing homelessness.

“So we work with all of the homeless service providers across Tampa and Hillsborough county to provide strategies, leadership, funding, and working with our government agencies, foundations, corporations, on a common goal: to make homelessness rare, brief, and nonrecurring.”

And you probably have a scale of how big of a problem it is. What can you tell us about the numbers? How many people are homeless in Hillsborough county and is that number increasing or decreasing?

“Across the country, every community is required to do a homeless count every year. Typically, the homeless count is done the last week of January, throughout the country. Now, we do it a little differently in Hillsborough County because of Gasparilla. And so we have received a waiver from the US Department of Housing and Urban Development to do our count in February.

“Everyone across the country does their count about January or February every year. Our next count is scheduled for February 2017. The last count of February 2016, we did have a reduction in homelessness. Approximately 1,800 people were experiencing homelessness in Hillsborough county. Those people are either in transitional housing programs, emergency shelter or sleeping in a place not meant for human habitation or on the streets, sleeping out of their car, abandoned buildings, things like that.”

Are there special needs or concerns that people without homes have, especially around the holidays?

“Absolutely. Especially this time of year. Even in Florida, you know, the weather is changing, so we always want to make sure that we work with our agencies to bring people in out of the cold, definitely around this time of the year.

“Between 2015 and 2016, we did see a 30% reduction in our street homeless population or sometimes ‘unsheltered population’ as it’s called. That’s getting people into services and into a program. So we’re really concentrating on those that are unsheltered.”

If someone is homeless or is close to becoming homeless, what do you recommend they do? Is there a number they can call or someplace they can get services?

“So, Salvation Army is usually the first place that people are in contact with an emergency shelter. We’re also working with other not-for-profit organizations to establish what we call our Community Housing Solution Centers. We have one with DACCO and it’s basically a shelter with one-stop programming also on site, so they can get a multitude of services. So, we’re looking to establish a couple more of those. What will be key to that is if a person is homeless, they can walk in without an appointment and we can work on rapidly getting them housed or in a housing situation. It might be a shelter, it might be transitional housing or it might be permanent housing.”

Hayes-Triplett says the next count will be on February 23, 2017.

How is this number changing over time? Is it going up or are there more and more people becoming homeless?

“The number looks as if it’s flattening out. One of the reasons why the number stays steady is because there’s more people receiving supportive housing, which keeps them in the classification of experiencing homelessness, but, actually gets them in housing. So, thankfully, there’s several agencies in the two county area and additional non-profits, that are creating shared housing models and increasing their housing stock, so that people who are experiencing homelessness, at least have a safe place to be housed.”

Is there anything else our listeners should know about this topic?

“Yeah, one of the things that’s important this time of year is to recognize that the agencies that serve those who are experiencing homelessness are going to have a significant influx from people from the north. It happens every year, right after significant snows. So, as we see this cold front going through Chicago to New England, know that there’ll be an influx within our communities.

“And those who have an interest in helping, I’d encourage them to partner with any of the viable non-profits, in their community, that will respond to this movement of people and allow people the choice for housing and also set community standards.

“So, I would encourage people to be patient, get involved, and be involved with programs that move people from homelessness to housing, as quickly as possible.”

Meanwhile in St. Petersburg, advocate Rev. Bruce Wright says on Facebook that the downtown St Vincent de Paul is requiring people who use their services to wear a wristband. He compares it to the Star of David that Jews were forced to wear in Nazi Germany.

In that new report, the HUD says in the U.S. since 2010 there has been “a 23 percent reduction among homeless families, a 47 percent drop in veteran homelessness, and a 27 percent decline in individuals experiencing chronic homelessness.”