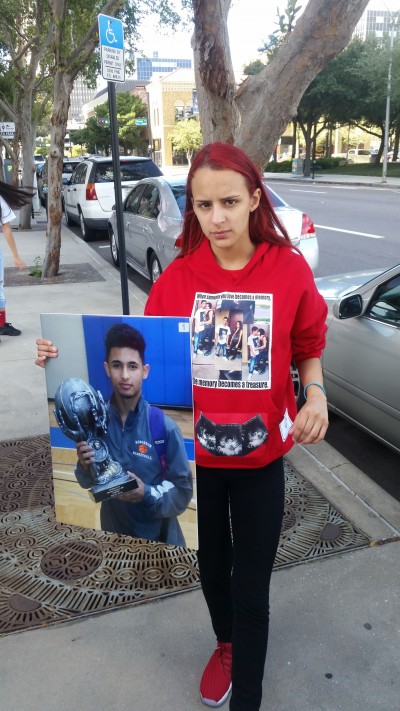 Last week an 18-year-old was killed in a confrontation with a Tampa Police officer. Police say Kobvey Igbuhay was one of four teens trying to elude officers in a stolen vehicle then hide in a swamp. According to police Igbuhay attempted to drown a police K-9 and the officer that ended up shooting Igbuhay. But Thursday morning more than a dozen of his family and friends pleaded with Tampa City Council to investigate the shooting. They say Igbuhay was unarmed, mauled in the face by the police dog and too small to cause harm to the officer or the K-9. Igbuhay’s pregnant girlfriend Shakira Rodriguez was in the car, hid in the woods and said she saw what happened.

“Whether his mistake was little or bad and me as an eyewitness, I know what he did is not what they’re saying. They could have shot him in the arm, in the leg; no reason to shoot him in the head. He’s 18, he had dreams, he had plans, he had goals, he had a future and a child on the way. He had so many plans for the baby. Now how am I supposed to tell my child his dad is never going to be around? How am I supposed to tell my child he’s going to grow up without a father? Cops can handle situations in different ways, especially when it’s a whole bunch of them and just one boy right there. They could have handled it differently and he could have been living his life right now.”

Joe Caimano is the attorney for Igbuhay’s father. He says the police rushed to the judgement that Officer Jimmy Houston was justified to shoot Igbuhay.

“I want to be able to see the evidence before we come to any conclusion. Look at their standard operating procedures on how they’re supposed to operate with canines’ use of force and what actually happened before we can really argue whether it was justified or not justified. We don’t feel that’s appropriate to make those conclusions like the Tampa Police Department did right then and there. … We have a witness who was present. We were walking out in the swamp yesterday with the Police Department. Again, they’re giving us a lot of cooperation in their investigation trying to show them exactly what our witness perceived as happening in the event.”

Tampa Police public information officer Stephen Hegarty says Officer Houston will remain on paid administrative leave during the investigation and that all records will be released when it is complete. As in other officer-involved shootings the state attorney is conducting a separate investigation to see if there should be criminal charges.

In related news, Thursday afternoon Tampa City Council advanced an ordinance that – if it survives its next vote as expected – would create a Citizen Review Board for police supported by Mayor Bob Buckhorn. Five members of the public spoke out against the review board and council members Frank Reddick and Yvonne Yolie Capin continue to oppose it for being too weak. WMNF News asked Reddick about it before Thursday’s vote:

“I will continue to vote against it. My vote today going to be against it. I’m disappointed and always been because I think every council member should had had the opportunity to appoint one person.”

Reddick says he will trust the process to review the police shooting of Kobvey Igbuhay but will consider the family’s request for an investigation if there are still questions about how the police handled it.

Supporters marched from City Hall to the County Courthouse to ask the state attorney for a fair investigation: 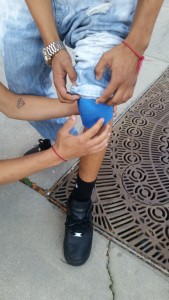 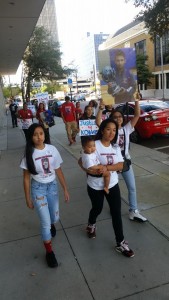