Home Blog News and Public Affairs In Tampa, people in poverty are forced to the edge of existence 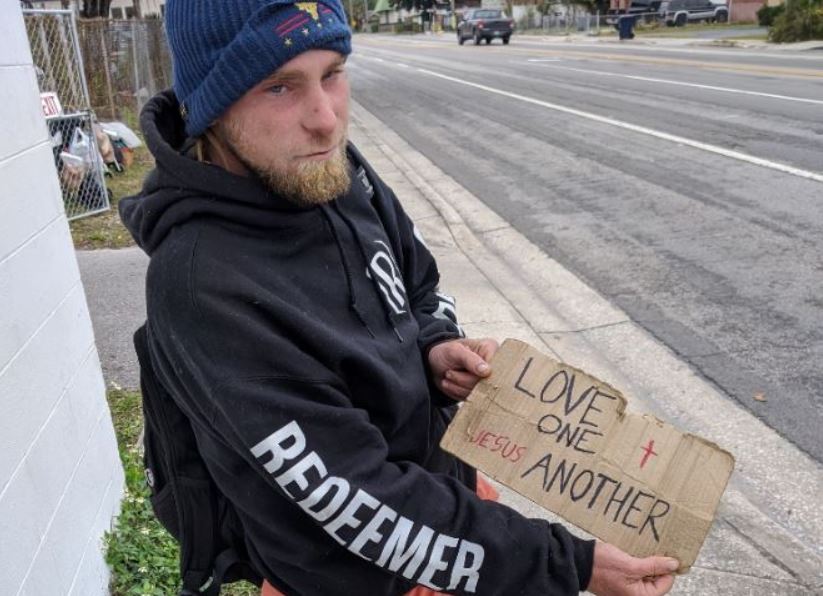 “They would rather us starve than be allowed to live out here.”

On the morning of September 3rd, Matthew Conway stood on a median in downtown Tampa holding a sign that read ‘Jesus loves you’, until Tampa police officers detained and arrested him.

He spent 10 hours in jail before he was bailed out. In court, he was convicted of soliciting on public roads with a court order of ‘no incarceration’. Instead, he’s going through a costly six months of probation. Matthew claims he was not soliciting that day, because his sign did not ask for money and he made nothing from holding it up.

On the morning of the day he was arrested, Matthew attended a Food Not Bombs share, where meals are distributed to those in need at Lykes Gaslight Square Park. He goes there often, it helps him stay nourished when decent food can be hard to find. He’s lived without a regular roof over his head for many years, couch surfing and living out of a car in Colorado before moving to Tampa to be with his wife, who broke up with him when he got here two years ago. He took to the streets after that.

A big reason he lives the way he does is that he doesn’t care for what he calls “a life trapped in materialism”, and wants to concentrate on spreading his message of belief, empathy and care. He does this through volunteering at Amazing Love Ministries and other churches around town, assisting and befriending those in need.

“So many people are just a step away from being homeless, one mistake can do it,” Matthew says. “But that doesn’t mean they should be abandoned or treated like criminals.”

After eating at Food Not Bombs and talking with some friends that morning, he started walking north toward the downtown library and stepped onto the median at Ashley Drive and Tyler Street to hold up his sign.

Austin Willis and Emmy Lou Fuchs organize and volunteer at Food Not Bombs. After wrapping up their breakfast share that morning, Willis and Fuchs packed up their car and headed out. As they were driving by the library they saw police blocking traffic at the median and talking to Matthew. They turned around, parked and approached the officers to ask what was going on. By this time Matthew was in handcuffs in the back of the squad car.

“We asked them why they were detaining him, what crime he had committed,” Willis says. “They just told us he was soliciting and it’s the law. They laughed in our faces for being upset.”

Willis says the arresting officer Patrick Foley dumped the contents of Matthew’s backpack on the ground to go through his belongings and took Matthew’s hat, which was never returned to him. They didn’t find any money or materials that resulted from Matthew holding his sign.  Matthew says Foley told him he was lucky to be arrested for soliciting only, that he could charge him for more crimes if he wanted to.

He went to jail while his friends gathered money to pay his bail. Jen Derless volunteers at Food Not Bombs and posted the bail for Matthew.

“When they released him he asked why we wasted the money because it would’ve only been 8 days in jail instead of 30 like last time,” Derless says. “That really stuck with me.”

Matthew has solicited before. In August he was arrested for accepting a handful of change from a passing car by the Burger King in downtown. He admits he accepted the money that time, but his sign wasn’t asking for it. Once again, his arresting officer was Patrick Foley. Foley did not respond to request for comment, but arrest records show he is familiar with Matthew.

“The city says you can’t ask for blessings or good vibes on your sign because that’s considered soliciting, so I don’t.” Matthew says. “But the cops are always watching us, waiting for us to do something. That first time I got arrested for soliciting, they said they were watching me from the bushes.”

While Matthew follows the rules on his signs, he doesn’t believe that soliciting should be illegal, because it’s the only way some people are able to survive. His signs send messages of empathy and spirituality. He currently carries a sign that says ‘love one another’.

When he showed up in court on September 11th for his arraignment, Matthew decided he wanted to fight his charge and thought Judge Paul Jeske was on his side.

“The judge said, well maybe the officer won’t even show up,” Matthew says. “And, I’m going to sign an order of no incarceration.”

On October 7th, he showed up for his court date. He didn’t have a public defender and when it came time for him to speak about his charges he froze for a moment because he was nervous. The judge quickly moved on. Court records show that officer Foley arrived to speak against him and the judge found Matthew guilty of county ordinance 4223-HCOR0501 (CN) SOLICITATION AND DISTRIBUTION ON PUBLIC ROADS, and sentenced Matthew to six months of probation.

His next appointment is January 3rd. The fees are piling up, and he was told that his officer will work with him, but at any time he could be charged with violation of probation for not paying his fees.

This is the fifth charge Matthew has faced this year. He’s been arrested twice for sleeping under an overpass and in public and twice for soliciting. In May he was charged with possession of controlled substance, the court withheld adjudication.

At Amazing Love Ministries where Matthew volunteers, there are similar stories of constant surveillance and arrest. Tom Ford volunteers there and feeds people. He’s witnessed the city’s efforts to ‘clean up’ Tampa.

“I’ve overheard the police talk about what they’re going to do about this ‘problem of the homeless’. They said, well, we’re going to trespass them and arrest them and trespass them again,” Ford says. “They’re trying to bull rush us. You can’t just pick a segment of the population to constantly harass.”

Ford and Matthew say that when they try to sleep outside, they get shuffled from one place to the next by the police, who wake them up, tell them they have to move to another spot, then once they get comfortable there they get moved again.

“On any given night there are at least 1,650 homeless men, women, and children in Tampa-Hillsborough County,” says the Tampa- Hillsborough Homeless Initiative’s website. “These are people who are sleeping on the streets, behind buildings, in encampments, in cars, emergency shelters and transitional housing.”

At Lykes Gaslight Square Park where Food Not Bombs hosts their food shares, there used to be benches where people would rest and sleep. In April, those were replaced by planters. In November, plans to transform the park into a cafe were announced. These plans come after multiple people were arrested in 2017 for feeding people. Community outcry lead to the city dropping the charges and allowing Food Not Bombs to continue.

Homeless people and their advocates say the constant police harassment and ‘beautification’ plans are a blatant affront to their well being, that those who are struggling the most are being forced to the edge of existence.

“They don’t want us in this city at all. To them, we’re a nuisance, an eyesore,” Matthew says. “They would rather us starve than be allowed to live out here.”