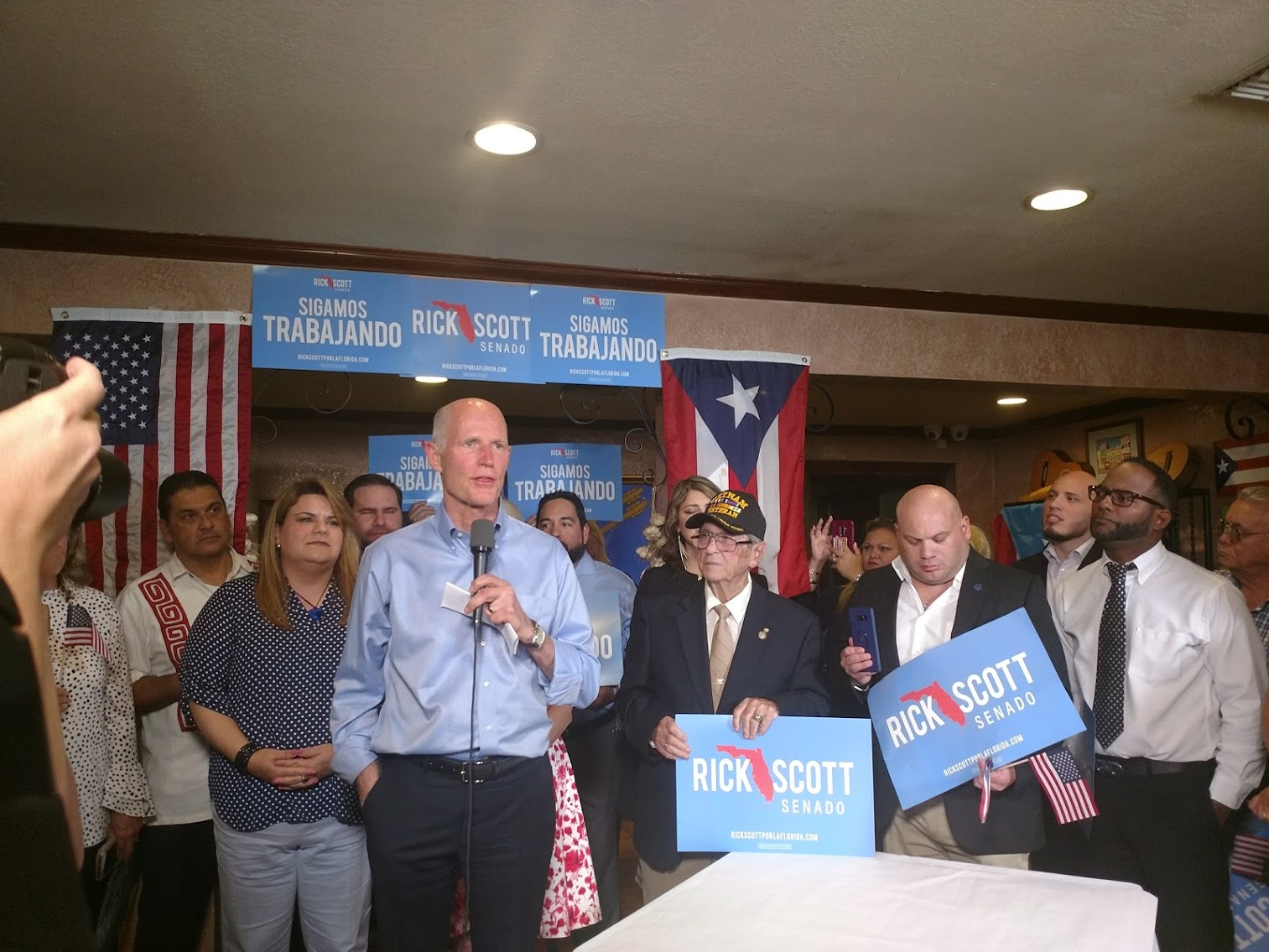 With more than 200,000 Puerto Ricans migrating to Florida in the aftermath of last fall’s Hurricane Maria, that already ascendant voting bloc in the Sunshine State has become an even more significant voting demographic as the U.S. Senate contest between Democratic incumbent Bill Nelson and Florida Republican Governor Rick Scott looms this November.

And Scott is working hard for that vote. In West Tampa’s La Casona restaurant on Tuesday afternoon, the governor and now Senate candidate campaigned with Jennifer Gonzalez-Colon, the territory’s congressional representative, who officially endorsed him.

“He went to the island five times to help us out,” Gonzalez-Colon said of Scott’s intense focus on helping the Puerto Rican population when most of the nation was without electricity immediately after the storm hit. “Florida was the first state to have an agreement with FEMA to help us out and send a lot of brigades to help with the restoration of the power grid in Puerto Rico.”

“We live in the greatest melting pot in the world,” Scott said, praising Puerto Ricans who come to the U.S. to create opportunities for themselves and their families. And while Scott campaigned in 2010 on an anti-immigrant platform (embracing Arizona’s controversial SB 1070 bill), he’s now all in on championing the diversity of Florida and the U.S.

“My goal is that this continues to be the land of opportunity. It shouldn’t matter the color of your skin; where you were born; your zip-code; how you start out,” he said. “You should have be able to have the chance to live whatever dream you have in this country.” Scott then repeated himself in his more than adequate Spanish, which has continuously become smoother during his nearly eight years in leading the state.

Scott and Gonzalez-Colon earlier appeared in Kissimmee in Central Florida, where the Puerto Rican migration to Florida began years ago. Scott sounded impressed when describing to the audience how he had met a merchant  there who only sold Puerto Rican goods. “It’s unbelievable,” he marveled. “The place is packed.”

Immediately after Maria made landfall last fall,  Tampa Puerto Rican natives Brenda Irizarry and retired Air Force Col. E.J. Otero rallied to coordinate deliveries of food, water and other supplies from Tampa to the beleaguered island. Otero says that Scott was the first politician to reach out to his group to help.

“I didn’t invite him. Nobody called him. We didn’t have the time,” Otero said while waiting for Scott to appear. “He showed up and he supported. He offered help – the National Guard and so on. We accepted that. Other politicians showed up later, but it was very telling that Gov. Scott took the time and the effort to support us.”

Earlier in the day, the Democratic National Committee issued out a statement questioning the governor’s sincerity.

“A week after Rick Scott kicked out Puerto Rican evacuees from his event in Kissimmee, he’s back with more of his usual lip service to Latinos,” said DNC spokesperson Francisco Pelayo. “But his actions speak very clearly. Rick Scott will say or do anything to get elected while thousands of Puerto Ricans in Florida are in peril because of the housing crisis he created by raiding the state’s affordable housing trust fund and gutting other programs that so many Puerto Rican and Latino families depend on.”

Senator Nelson has also continued to address the situation in Puerto Rico, months after the storm hit. Last month joined U.S. Rep. Darren Soto in sending a letter to President Donald Trump that called the federal government’s response to Maria in Puerto Rico as “slow, tepid and completely inadequate.”

In a Q&A with reporters after his formal appearance, Scott said he did not agree with Marco Rubio’s recent comment on the big tax reform plan passed by congressional Republicans and signed by the president last December.  Rubio said the plan had not overwhelmingly benefitted workers. Scott had a different take.

“I’m glad Washington cut taxes,” Scott said, adding that he has cut taxes nearly 100 times during his tenure as governor. “I think it’s been a Godsend to this state. It’s helped us continue to grow our economy….I’ve been very appreciative of the tax cuts.”

Scott also repeated his criticism of conservative pundit Dinesh D’Souza, who mocked the teenage survivors of the Parkland shooting massacre on Twitter after the Florida Legislature rejected a proposal to ban assault weapons back in March. D’Souza is scheduled to speak this Saturday at the Florida GOP’s Sunshine Summit.

“I think it’s disappointing what he said,” Scott said. “I’m very disappointed that anyone would say those things.”

Scott also boasted that he has crushed his 2010 campaign pledge to help create more than 700,000 new jobs, saying that the private sector has added more than double that amount during his seven plus years in office. 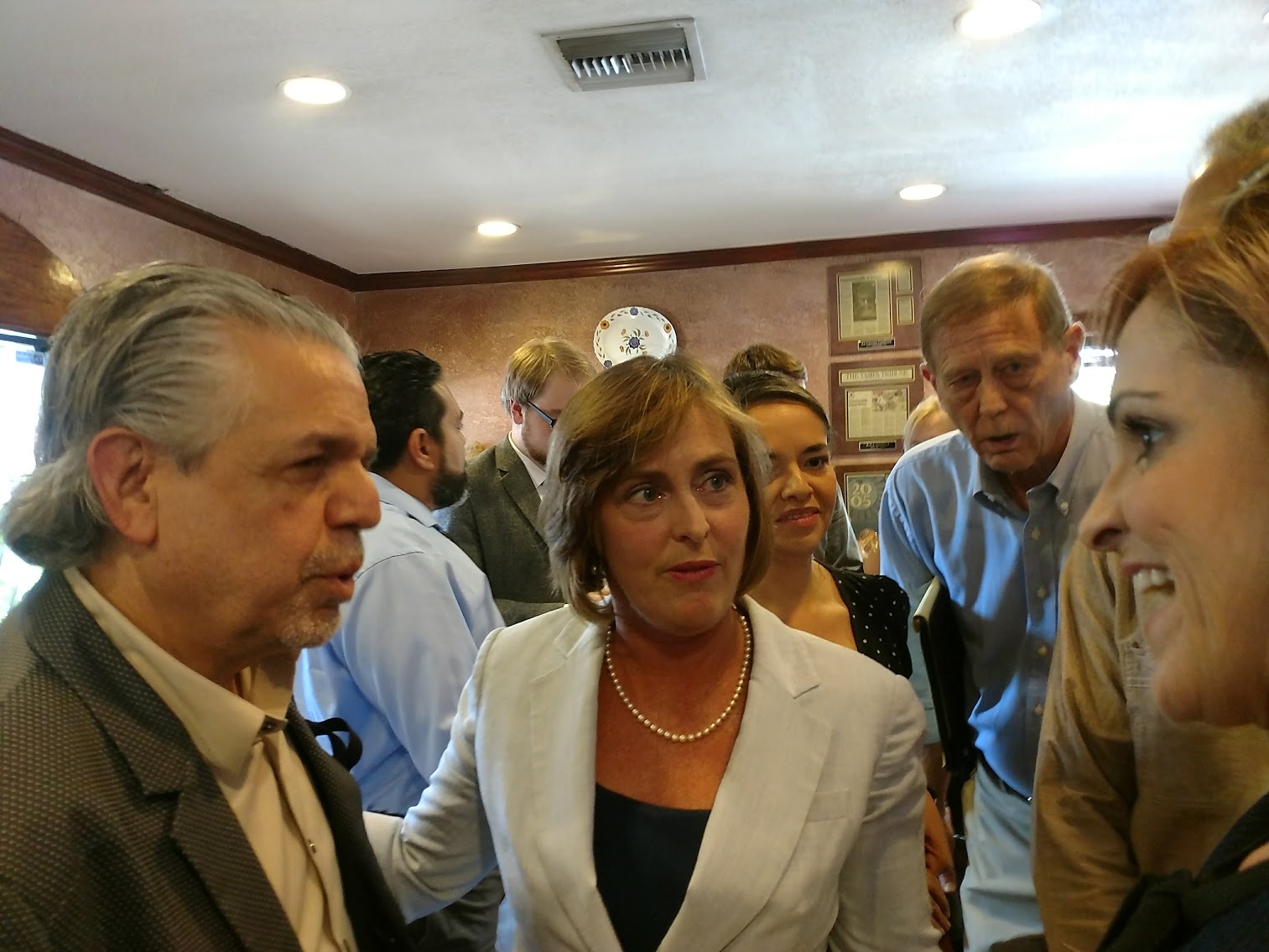 La Casona was the place to be for politics in Tampa on Tuesday. Before the governor appeared, Democrats like Rep. Kathy Castor and House Minority Leader Janet Cruz met up at the eatery with Luis A. Miranda, Jr. on registering Puerto Ricans in Florida to vote this fall. Miranda Jr. is the father of Lin-Manuel Miranda, the American composer, lyricist, playwright, and actor of Puerto Rican ancestry best known for creating and starring in the Broadway musicals Hamilton.