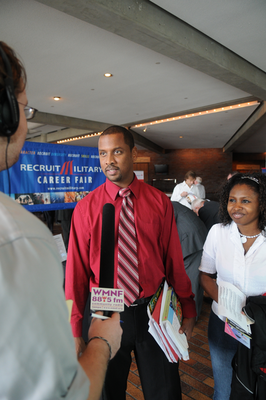 Seeing combat oversees can be a challenge, but for many veterans, finding a job is a battle that is just as hard to wage. A group called Recruit Military held a job fair for veterans this morning at the David A. Straz, Jr. Center for the Performing Arts to help veterans get work.

About 300 unemployed veterans were expected to attend a job fair in downtown Tampa today. RecruitMilitary is veteran-owned-and-operated military-to-civilian recruiting firm. They provide free services to job seekers with a military background, connecting employers and educational institutions with men and women who are transitioning from active duty to civilian life.

Sgt. Chris Powell with the Hillborough County Sheriff’s Office is currently serving in the Air Force Reserve, and served four years of active duty in the military. He says law enforcement is a great opportunity for veterans to use some of the same skills they honed through military training.

The American Legion was present at the fair, to recruit members to the nation’s largest veterans service organization. The group supported the updated GI Bill in 2008, which gave veterans with active duty service on or after September 11 2001 increased benefits that cover educational expenses, provide a living allowance, and money for books. Robert Brewster said that increased membership would increase that organization’s considerable political clout.

Sergeant Ronald Brown joined the service at 18, and has been building highway infrastructure following his service with the Army’s 82nd airborne, but has had trouble finding steady work. He says he has been interested in working on jobs for loading ships.

Brown said that he would be interested in potentially working for the Civilian Conservation Corps, if congress revived the depression-era program.

Lashelle Eligon is the wife of a veteran, and was interested in a program that provides government funding for those pursuing degrees in education called Teaching for Troops.

Bank of America was interested in hiring veterans for their technical training and background. Joshua Rennick works with Bank of America, and pointed out that veterans have transferrable skills that will help them on the job.

Barack Obama issued an executive order last September to help unemployed veterans. Currently the unemployment rate among veterans is more than the national unemployment rate with about 11% of veterans out of work. Recruit Military also hosted job fairs today in Texas and California.