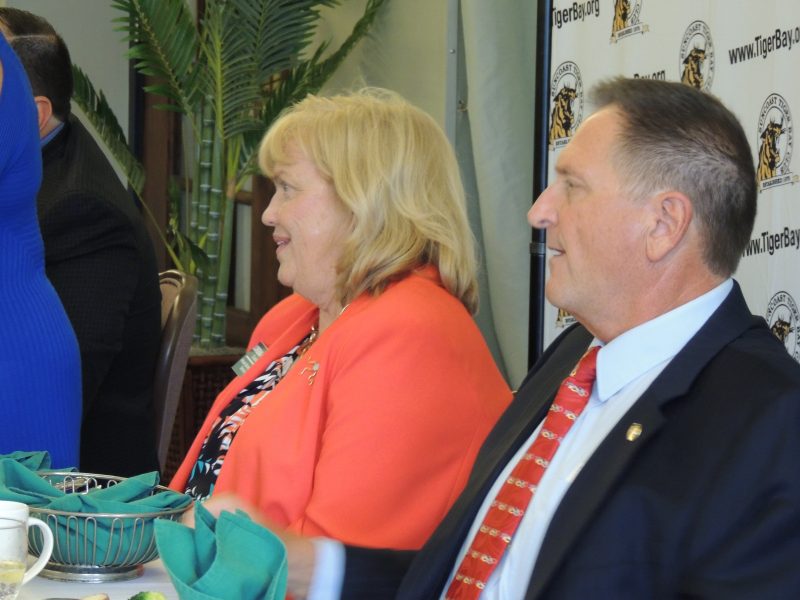 The two candidates fighting for Pinellas County State House District 66 faced each other Wednesday afternoon at the Suncoast Tiger Bay Club in St. Petersburg; the district stretching from Clearwater Beach to Bay Pines is represented by Republican Larry Ahern, he’s being challenged by an elementary school teacher, Democrat Lorena Grizzle.

They differ on whether Florida should expand enrollment of Medicaid.

“Well, if you’ve been to my website, you know that I support Medicaid expansion. I have for several years now.

“And then I want to tell you about my sister, who passed away because she couldn’t get Medicaid expansion. Her hospital bill was $50,000, before she died. Medicare came in, picked it up because it was renal failure, in the end. We paid $50,000 for something that could have been prevented for $500, plus the cost of the tragedy of her losing her life.

“So, yes I am for Medicaid expansion. Thank you, Kim for bringing that up.”

“We’ve looked at the Medicaid expansion for a couple of years now and have worked, in the House, to come up with some of our own programs that would cover the people, most vulnerable, in that.

“Remember, Medicaid was a safety net, it wasn’t designed to be a total insurance policy. That’s the part that, I think, we always tend to forget about.

“We’ve done some things that will allow for private health insurers to come in. We’ve proposed some plans that would subsidize some health care accounts that people could draw on, to set up, to be able to participate in regular, real, insurance–the ones like you and I have–that would really benefit from this type of program.

“We’ll continue to work on more transparency, some free market solutions and sadly, as the federal government has discontinued the LIP program–the low income pool–to us, in order to try to force Medicaid expansion on us, we’ll continue to back-fill that as well.”

They were asked about gun bills in the Florida Legislature, the Pulse nightclub massacre and the power of NRA lobbyist Marion Hammer.

“Now that you mention, Mary Hammer, I think that we’re going to see a legislature without passing anymore, except, perhaps we can get the assault ammunition banned–the high-capacity ammunition, which would– that would be a big start. I don’t expect much more to happen, but, I will continue to work for gun safety and I would like to see high-powered rifles actually–we need to get rid of it at the end.”

Moderator, Peter Schorsch: “I’m gonna add on a question with that. Do you support or oppose ‘open carry.’

“I oppose open carry and I’ll tell ya, I can’t imagine that we want to show our kids that role model.”

“You know, that’s a–the gun bills have always been some of the most controversial and hard votes to take, even at some times, especially with these types of tragedies in our state and other states, as well.

“I don’t know that banning weapons are the answer to all these– that always seems to be the first reaction–the knee-jerk reaction is to start banning things. We know it’s a 2nd Amendment right. It’s not something that we would take lightly.

Moderator: “And on open carry?”

“On open carry: I supported it in the committee. Florida used to be an open carry state. Maybe you didn’t know that. They fought against it and now we’re debating whether it should be again. I think we look at– I’d keep my options open on that.”

The two differ on the medical marijuana constitutional amendment that’s on November’s ballot.

“I support Amendment 2 because I think it’s the only way it’s gonna get through. Unfortunately, our legislature will not do anything about it. I’m not speaking specifically for the members, but, as a body of the whole.

“One of the things that happened to me: I had a child in my 2nd grade class, who had seizures. She passed away from her heart condition, which was a result of the seizures. She was a shaken-baby syndrome child, in my special-ed class. I saw where that could help this child. What they have out there right now, would not have helped her and I think we need to do it and do it without delay, in the legislature.”

“Yes, I don’t support Amendment 2 for some of the very same reasons. There’s no definitions in the constitution and there’s no way to change it to make sure that you can get what you want. We have been working, the last 2 sessions, and we did pass a medical marijuana bill and it’s being set up to be grown, but, we hold it all accountable. We pay for it. We make sure it’s the low THC variety–it’s not the smokable type.

“Those are the types of things that, really, Amendment 2 seeks to do away with. You’ll end up with recreational marijuana, here, if you vote for Amendment 2–ultimately, that’s where it’s going.”

The two candidates also differed on how to grade Governor Rick Scott’s terms – Ahern gave Scott a ‘B,’ Grizzle gave him an ‘F.’