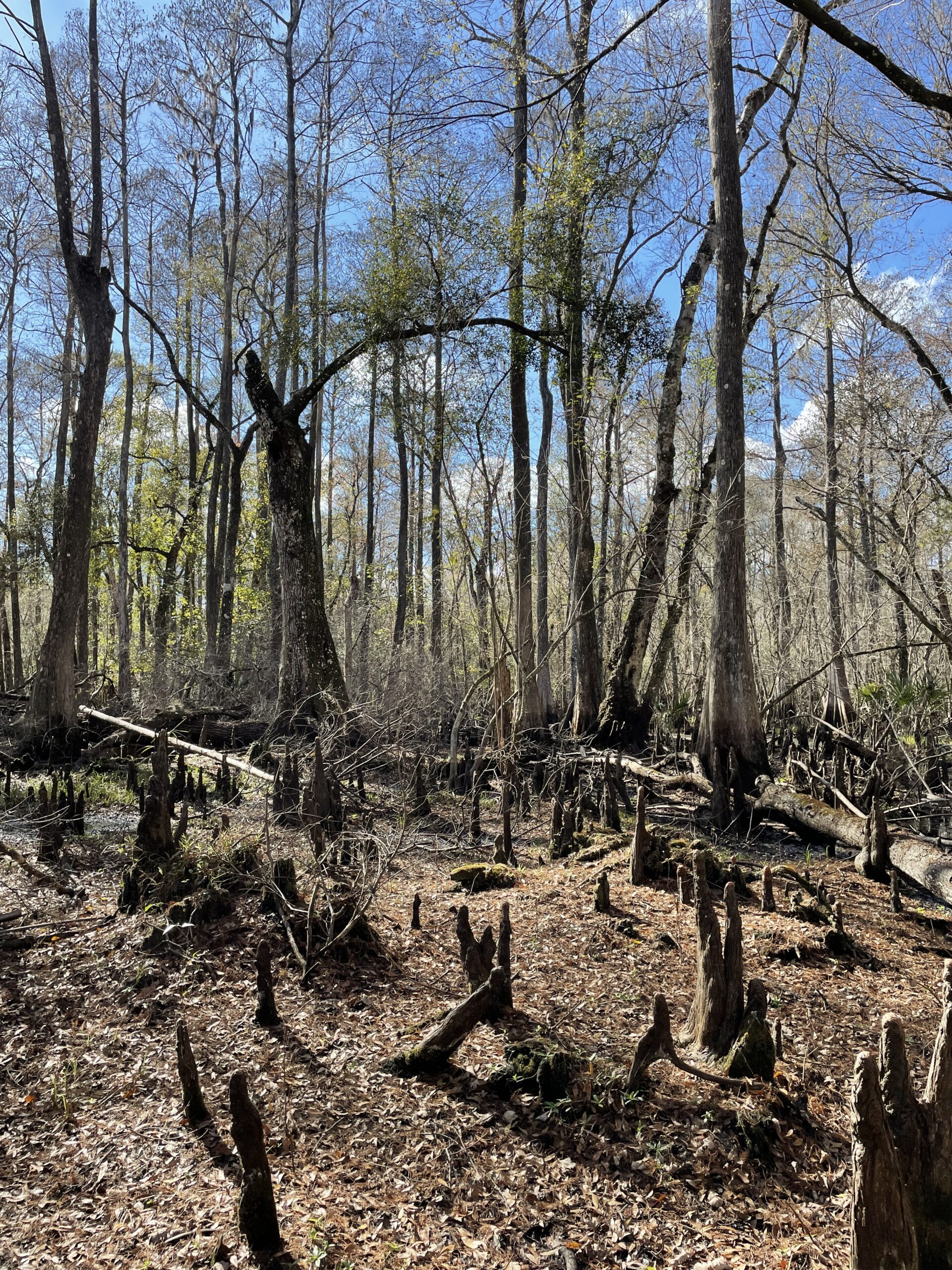 A student-led activist group, Save the USF Forest Preserve, is trying to protect forever the 118-acres found north of the Tampa campus. Last year’s failed development attempt by the university led some, like environmental biologist Dr. Jeannie Mounger, to seek out long-term land protections. The group hopes to petition the state for what’s known as a conservation easement, or permanent preservation agreement.

During the second half off of our walk, Mounger and I descended from the browned sandhills, into the preserve’s lush floodplain and swamp.

“This is the floodplain,” Mounger said. “You can start to see there are some Cypress out there, there’s some cypress knees popping up. There’s just a very clear vegetational change. You’re starting to see some ferns, and a lot more vining species.”

A critical link to the Florida Wildlife Corridor

To the northwest, the Cypress Creek floodplain area, a big series of preserves that run into Pasco County. To the east, running up the Hillsborough River to the Green Swamp, is contiguous conservation land along the river. Mounger says that ultimately leads to what’s known as the Florida Wildlife corridor.

“So this is sort of an arm of that,” Mounger said. “If you lose this piece, you effectively sever the Cypress Creek floodplain and Pasco County from that whole corridor.”

Severing the corridor could have major implications for the wildlife that moves up and down the state. Wildlife like the preserve’s many river otters, one of the floodplain species that use uplands to move between territories. Encroachment from development has left traveling otters dead on busy nearby roadways.

The Hillsborough River is Tampa’s primary drinking water source. Before water reaches the river, much of it is filtered through the preserve’s floodplain. Making the USF Forest Preserve a critical link in Tampa Bay’s watershed. 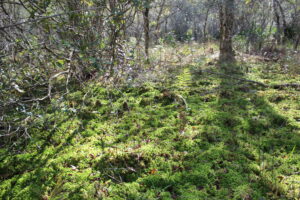 The floodplain is a vital part of the Tampa Bay watershed. Credit: Arielle Stevenson/WMNF

“This springy vegetation that we’re standing on is capturing carbon, but it’s also capturing pollutants,” Mounger said. “So it’s very vital that these wetlands remain here in order to keep our drinking water.”

Two months ago, a discovery was made down here in the muck and mire. Ghost pipes, ephemeral white and reddish plant blooms that come and go quickly, were found for the first time on the preserve.

“Those russula, they’re attached to the root system of these oaks,” Mounger said. “And then yes, there’s this parasitic plant known as ghosts pipes that tricks the mushrooms into thinking that it’s in a relationship and then just steals nutrients from it. And they’re a beautiful and peculiar little plant.”

And Mounger says, there’s so much more to be discovered in this distinct and threatened environment. That’s why she and others are working to secure a conservation easement.

“A lot of discoveries still being made,” Mounger said. “There’s still a lot of valuable research that can be conducted out here. It has so so much value beyond just being real estate.”

For more information, visit savetheusfforestpreserve.com. Listen to part one of our story here.