Home Blog News and Public Affairs Mayors of St. Petersburg and Tampa weigh in on Rays and other issues 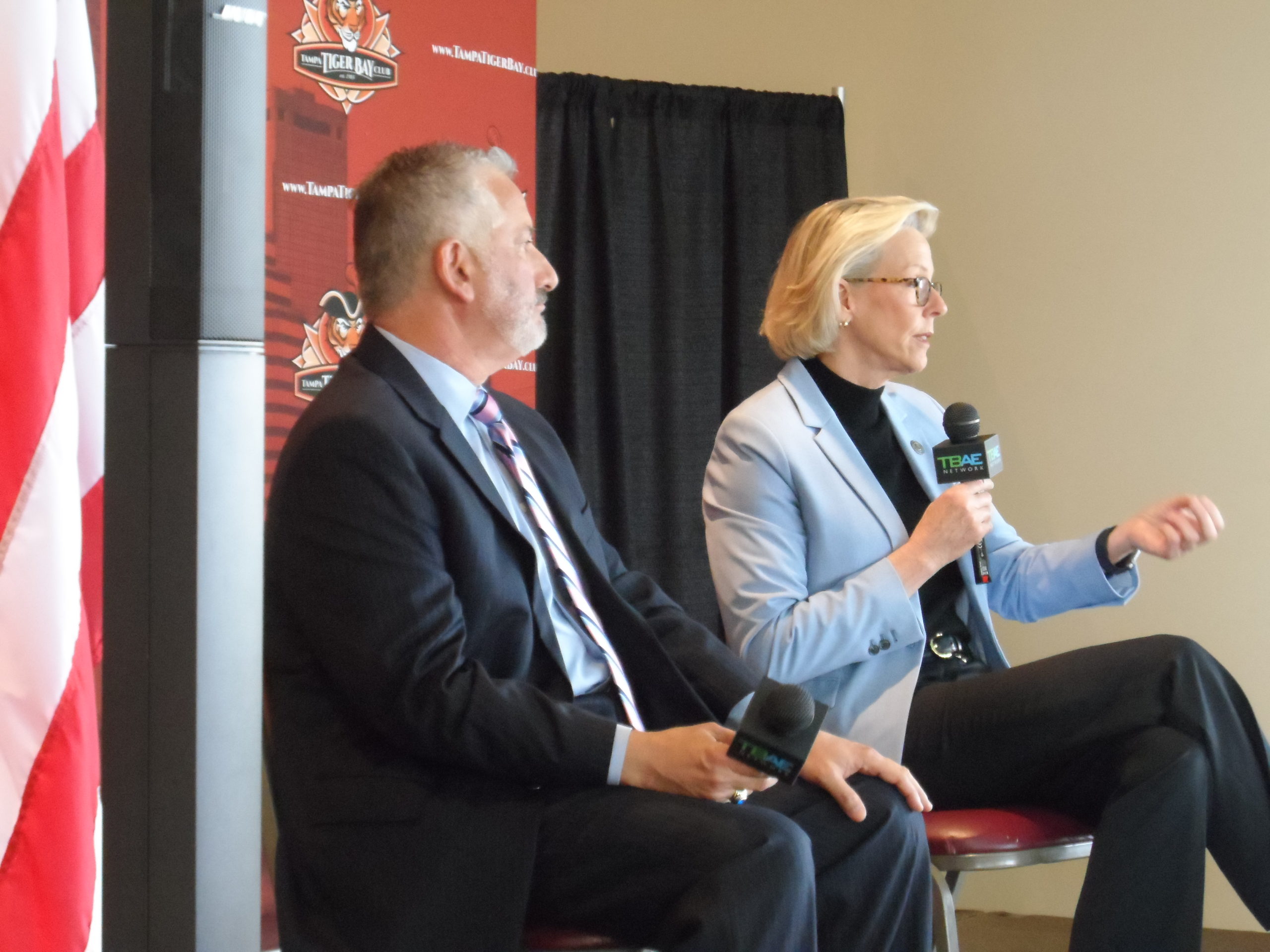 St. Petersburg Mayor Rick Kriseman and Tampa Mayor Jane Castor spoke about a range of topics like the Tampa Bay Rays, sustainability and climate change and the Florida Legislature infringing upon cities and counties.

Kriseman and Castor were asked whether the two of them discussed the Rays.

“We have talked about the Rays. And, in fact, this was a question not surprisingly that came up at our previous [Suncoast] Tiger Bay that we attended together. We had talked about it at that point in time, too, and decided that we were going to — as a parting gift to Mayor George Cretekos, who is the mayor of Clearwater — were going to give him the Tampa Bay Rays [laughter].

“The only thing: there is somebody on the other side. There is an organization that certainly has ample money to pay for a new stadium. They might ask [Rays owner] Mr. Sternberg to change his religion, but otherwise, there is plenty of money across there for a new stadium. That’s what we have agreed upon.”

“Well we’re looking, we’re in discussions, about locations with the number one, if it’s in Tampa, again keep them in the Tampa Bay area. If it’s on this side of the bridge, Ybor City is the number one pick to have a stadium. A smaller stadium that doesn’t have a roof on it and that we will be utilized year-round for different sports, different activities. So that’s what’s going on over here really what you see in the media.”

“I think it’s important to remember that my administration and the actions that I took was the first time that administration in St. Pete had even allowed the Rays to consider somewhere else other than St. Pete as their future home. And that was through an MOU that lasted for three years. At which time they examined their options on this side of the Bay to see if they could make it work.

“On our side of the Bay, I think the two sites that the team is considering are the Al Lang [waterfront stadium] site and still the Tropicana Field site. Both sites, I think, provide them with great opportunities.

“I have been very clear in the position that I have taken related to this. And it kind of surprises me still that when I hear somebody say, ‘Well you’re not letting them explore the split [season with Montreal].’ And I have been very clear: they absolutely can explore the split whether it’s in Hillsborough / Tampa or it’s in St. Petersburg. They just have to be looking at 2028 for when that split would begin. But they could be exploring that, they could actually be exploring if they wanted to, relocation anywhere outside of our area.

“Having said that I still believe the Tampa Bay area is the best for this team for their long-term future. We are the 3rd largest state in the nation. Our state is one of the fastest growing states in the country. This market is one of the strongest markets, the 11th largest TV market in the country. This team has viewership that’s in the top 5 in Major League Baseball. And TV revenues are one of the major drivers for revenue for Major League Baseball.

“So I think it would be difficult, and I don’t think I’m being naive in saying this, for the team to be looking at a market like Charlotte, for example, that is somewhere I think around 22nd [largest television market] when TV revenues plays such an integral part of their financial economics.”

Later Kriseman challenged the idea that the Rays were struggling financially, pointing out that the monetary value of the team has increased several hundred million dollars over the past 13 years or so. He also said other teams had relatively low attendance last year – like Baltimore and Pittsburgh.

Both mayors were asked to share who they’d be voting for in the Democratic presidential preference primary.

They both said they would not say.