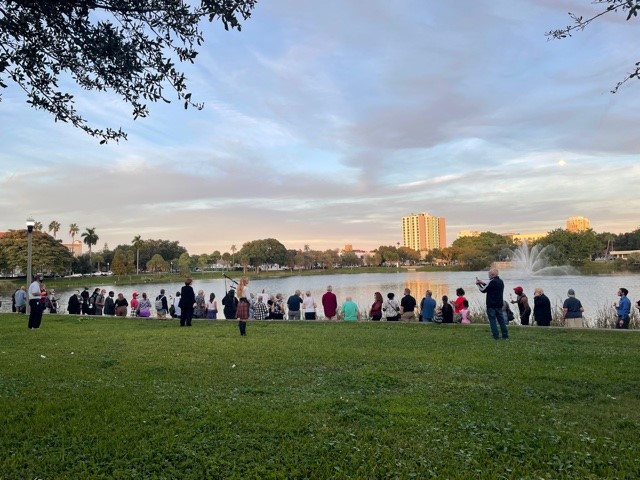 The 14th annual observance of National Homeless Persons Memorial Day is held on or near December 21, the longest night of the year. Friday night in St. Pete, the community gathered at the Unitarian Universalists Church to honor the over 80 homeless who died in Pinellas County this year. The names of the dead were read aloud and roses were left in their honor at Mirror Lake. Unitarian Universalists Rev. Ben Atherton-Zeman spoke about how little separates those who become homeless from those that haven’t.

The memorial was organized by Celebrate Outreach, a coalition of St. Pete faith-based groups dedicated to ending homelessness.

Longtime homeless advocate Rev. G.W. Rolle gave the eulogy for those that passed away.

It’s estimated that over 28,000 people are homeless in Florida as of 2021. Outgoing St. Pete city council member Amy Foster says the city has what it takes to end homelessness.

Some had no names

“We’re here to lament the fact that we haven’t ended homelessness yet,” Foster said. “But we have the resources we need here in the United States, here in the city of St. Pete, to do that. I think none of us will sleep until that happens.”

Over 85 names were read aloud, some were added at the end, most by their street names alone, some had no names at all.