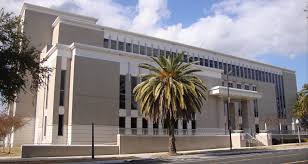 Robert Coleman, a 33 year old ex-felon, wants to vote. However, he owes $95,000 in fines to the court system. Last week, officials from the Alachua County’s Public Defender’s Office filed a motion, the first of its kind in the County, requesting that the court suspend his outstanding debt. The case is viewed as a litmus test to gauge how judiciary might rule on suspending felons’ outstanding debts in order to obtain their right to vote.

Coleman was a 26 year student at Santa Fe College when he was arrested on drug trafficking charges. This was his first, and only arrest. He spent 86 days in jail, and then was placed on probation for 5 years. He also, received a financial obligation to the court of more than $108,000. So far, he has been able to pay off $13,458.

“He’s an example of someone who made a mistake, got caught up in the club scene, and then did everything right. It’s ridiculous preventing him from being a participating member of society in terms of voting.” Stated Alachua County Public Defender Stacy Scott.

Rachael O’Brian, the assistant public defender who is handling Coleman’s case, has petitioned the state to waive Coleman’s debt so he can vote in November. The petition argues that the fine is insurmountable, that Coleman has worked extremely hard to make amends for what he did, and has taken significant steps to become a contributing member of society.

If the judge agrees with the arguments, they hope that the case will set a precedent for felons in Alachua County, and beyond.

In 2018, Florida voters passed Amendment 4, which restored voting rights for one and a half million felons. Unfortunately, legislators passed a law in 2019 requiring felons to first pay all outstanding fines and restitutions before they could obtain the right to vote. This revision is seen as discriminatory against low income people who do not have the funds to pay off the fines.

Quotes from Sarah Nelson’s article in the Gainesville Sun. For more information on this story: https://www.gainesville.com/story/news/2020/09/03/public-defender-fights-restore-felons-voting-rights/5690725002/