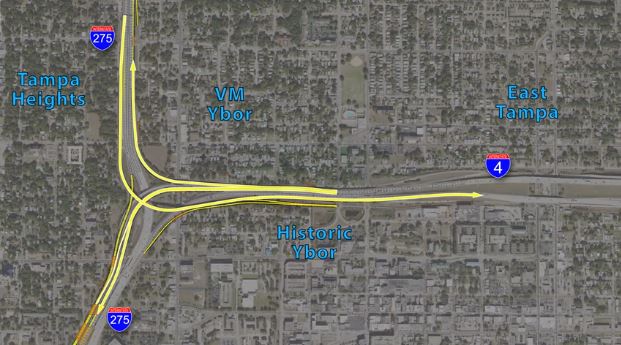 “So this takes all that traffic out and makes it direct connect down into 21st and 22nd street without ever having to get on I-4.”

Tampa City Council member John Dingfelder has opposed any physical widening of 275 and tolling on interstate highways but voted to keep some of the new exits in the plan noting that congestion is a problem.

“I think any of us who use those exits realize there is a lot of backup at the 21st and 22nd street exit.”

There aren’t any plans to physically widen I- 275 since the median would be used to add additional lanes, but the part of the proposal connecting I-275 North with Ybor City could expand the footprint, prompting Hillsborough County Commissioner Pat Kemp to make an amendment to remove the project from the plan.

“Instead we’re just directing two more full lanes of traffic in each direction into that interchange that is already by all accounts functioning poorly. It is incredibly unsafe.”

Beth Alden is the executive director of the MPO and says one of the I-4 exits may expand the footprint of the connection.

“One of the fixes that DOT wants to do is to the ramp that exits to go north on I-275. And that’s where the properties would be acquired.”

About 10 properties north of I-4 could be purchased to make way for the exit. Dayna Lazarus sits on the Citizens Advisory Committee. She says they will be voting on a resolution to promote racial justice on Wednesday, August 12th at 9:00 am.

The MPO passed the TIP with an 8 to 7 vote with County Commissioner Ken Hagan abstaining. More information on the tip can be found at planhillsborough.org.