Home Blog News and Public Affairs Neighbors in St. Pete want to save tree from developers 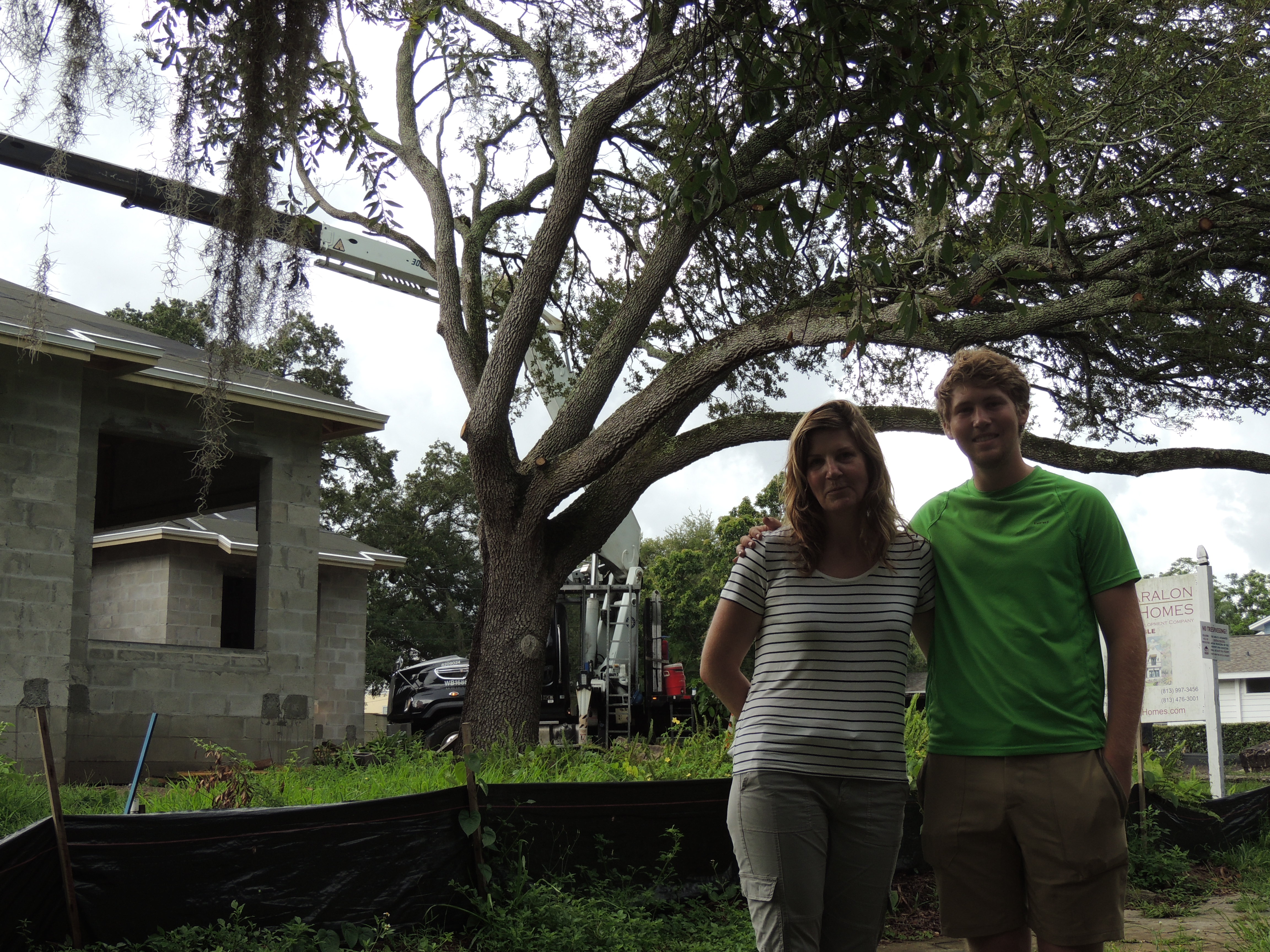 Residents in the Allendale Terrace neighborhood of St. Petersburg are fighting to protect mature live oak trees from getting cut down to make room for new houses.

A developer is building several homes on the former site of a single older house on 35th Avenue North.

WMNF asked Mike Bartoletta with the developer, Taralon Homes, for an interview. He said, “I will respond to you at a meeting with the City (of St. Petersburg).”

Our first guest on WMNF’s MidPoint Monday was Anne Dowling, who lives across the street from the tree. She’s vice president of Allendale Terrace Neighbors United Association.

St. Petersburg City Council member Darden Rice had this to say when WMNF News interviewed her in front of the tree on Wednesday (July 24; video below).

“Behind me, you see one of the new homes by Taralon Homes. There previously was a large, big, beautiful home that was torn down. And now, we have three or four houses being, kind of, slid into this spot.

“And what you see behind me, is a beautiful, healthy live oak tree with over a 30 inch diameter. And, it’s estimated to be between 60 and 80 years old, which means it’s still in the first half of its lifetime. And, we have, right here, what is ground zero in the battle between trying to preserve our beautiful grand oak trees against developers who want to take them down.

“This developer actually got a variance, and was able to build this new house with a closer lot line. As you can see, this house is closer to the street than all of the other houses down the rest of street. They had to get a variance to do that. The got the variance because they were protecting, it was a reward for protecting this live oak tree that’s behind me.

“And now this, morning my constituent had to stand in front of chainsaws, to tell a company to stop from taking the tree down, because the developer says that state law allows them to remove the tree. Now, that’s not exactly the case. The developer has to prove that the tree is causing a danger or diseased.

“We don’t have that paperwork from their arborist prove that yet. But this is the conundrum. And this is where we’re falling between the cracks between laws that do not protect trees and state laws written for developers to allow them to take down whatever type of old beautiful tree willy-nilly.

“Thank goodness my neighbor and our citizen Anne Dowling was here today to keep an eye on it, and the way and interfere, because she wasn’t, this beautiful tree behind us would be gone.”

SK: But they applied for the variance and got the variance. Would that somehow be voided if the tree is torn down?

“Well, how do you void it? They’ve already built the house. And it also doesn’t make sense. They clearly designed and built this house around a tree to emphasize it. Maybe a future buyer would see this neighborhood, see that it has a beautiful oak canopy, and would want that tree. This is spitefulness from the developer. We’re going to fight it every step of the way.”

SK: The developer said it won’t be torn down today, is that right? What about tomorrow?

“Right, exactly. I mean, goodness. It’s a good thing we were paying attention. We have to stay on our toes to watch what they’re doing, and that is what is so frustrating.”

Watch the interview with Darden Rice:

Here’s an interview with Anne Dowling in front of the tree:

On the show we also spoke with Dezeray Lyn with Love Has No Borders about things like U.S. soldiers being stationed inside migrant detention camps as “prison guards,” a surge in legal cases in the Tampa Bay area in response to immigration raids and the large number of migrants in Florida targeted for deportation even though they have no criminal records.