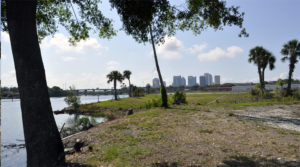 Tampa will add 12 miles of pedestrian and bicycle paths thanks to a $24 million BUILD grant. According to a press release from the office of Tampa Mayor Jane Castor (D), the grant will enable construction of pedestrian and bicycle paths along the West River area from Cass Street to Columbus Avenue, and connect to Tampa’s Green Spine Project at Cass Street. (https://www.wmnf.org/tampas-green-spine-bicycle-trail/)

The project plans to develop “a contiguous multi-modal path separated from vehicle traffic, with complete streets and traffic calming improvements,” according to a press release from U.S. Rep. Kathy Castor (D-Tampa). The path will connect West Tampa, to Downtown, Tampa Heights, Bayshore, Hyde Park, Ybor and East Tampa, and will include landscaping, seawall repair, and other needed road improvements. All paths will be separated from vehicle traffic to provide safe mobility for pedestrians and bicyclists.

“This is a transformative project for the City of Tampa that will lead to significant investments in West Tampa and the West River,” said Mayor Castor. “Not only will the continuation of the Riverwalk on the West side of the river provide safe multimodal transportation choices for pedestrians and commuting cyclists, but it will create a world-class destination for the surrounding new and existing neighborhoods.

“Tampa’s strategic growth and quality of life are fueled in part by the Hillsborough River. A project like this will spur growth and lead to new business opportunities, jobs, affordable housing developments, and more ways for out residents and visitors to enjoy our waterfront as we Transform Tampa’s Tomorrow.”

In addition, U.S. Rep. Castor announced that Hillsborough County was also awarded a grant of $25 million.

“The nearly $50 million in federal BUILD (Better Utilizing Investments to Leverage Development) grants that are on the way to Tampa and Hillsborough County will lift our neighborhoods, build mobility, increase connectivity throughout the county, and provide needed improvements to our streets,” stated Rep. Castor. “Mayor Castor, Commissioner Miller, and other local leaders, have been tremendous partners in helping to secure these infrastructure dollars and build on our shared vision for a safer, friendlier, and connected community.”

According to the press release, the County grant will be used to widen and reconstruct the existing interchange at Big Bend Road and I-75, including additional bicycle lanes, multi-use paths, and a roundabout at the intersection of Old Big Ben Road and Bullfrog Creek Road.

“Today’s announcement of a $25 million BUILD (Better Utilizing Investments to Leverage Development) grant for Hillsborough County is critical as our population grows and addressing the infrastructure needs of our community to ensure our region’s economic competitiveness while improving mobility.” said County Commissioner (D) Les Miller.

The $49 million grant to Hillsborough County and Tampa, was the only BUILD award recipient in Florida.